The world's chemical weapons watchdog has convened over accusations that Russia carried out a nerve agent attack on an ex-double agent in Britain. Moscow demanded the meeting, saying it wanted to raise issues. 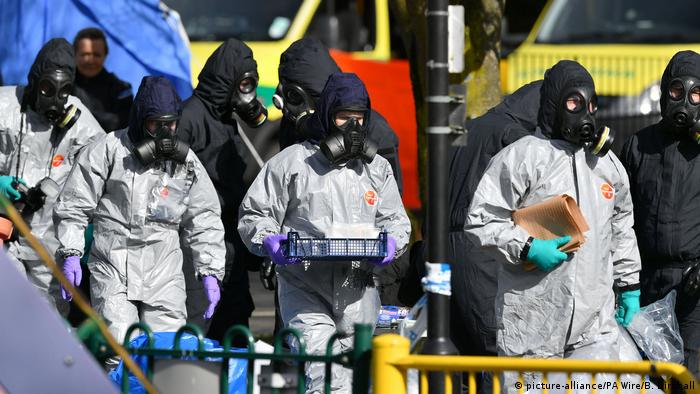 The Netherlands-based Organization for the Prohibition of Chemical Weapons (OPCW) gathered for an emergency meeting on Tuesday, to discuss "at least 20 issues" raised by Moscow.

Russia says it wants access to case materials, and for Russian experts to be allowed to investigate the poisoning of its former intelligence operative Sergei Skripal and his daughter Yulia.

Accusations against Russia in the wake of the attempted poisoning, which also harmed a British police officer, have led to a diplomatic row involving more than 20 countries.

— Skripal, who has lived in Britain since 2010, when a spy swap took place, and his daughter Yulia have been in hospital since they were found unconscious in the southern English city of Salisbury on March 4. The 33-year-old is said to be improving, while her 66-year-old father remains in a stable but critical condition.

— British Prime Minister Theresa May has said she believes that Russia was responsible for the attack using the nerve agent Novichok, which was developed in the former Soviet Union. British Foreign Secretary Boris Johnson said it was "overwhelmingly likely" that Putin himself had ordered the attempt.

— British counterterrorism police initially thought that the poison had been administered to the pair in a public area, but now believe the substance was left on a front door handle at their Salisbury home.

— A British military facility that was asked to analyze the substance used in the attack has said it cannot prove that the material was made in Russia.

— A Russian military chemical expert has said the nerve agent could have been made anywhere.

Ahead of the session, Russian President Vladimir Putin said there were "at least 20 issues" on the agenda. "I hope this session will draw a line as to what really happened," Putin said. Putin's spokesman Dmitry Peskov said that the Kremlin was demanding an apology from the UK and that this "idiocy has gone too far."

Britain's Foreign Office claimed the OPCW meeting was requested by Moscow as a "diversionary tactic, intended to undermine the work of the OPCW in reaching a conclusion" about what had happened.

The poisoning has sparked a huge diplomatic dispute, with Britain expelling 23 Russian diplomats, and Russia responding in kind. Other European Union nations, including France and Germany, as well as the United States and other NATO allies have responded by expelling more than 150 Russian diplomats from their countries. Russia subsequently responded with tit-for-tat retaliations against those countries.

Sergei Skripal was convicted in 2006 of selling Russian state secrets to the British. He was traded in a spy swap in 2010.

EU majority stands with United Kingdom in its fight with Russia

Seventeen EU countries have announced that they will expel Russian diplomats. Yet how sustainable is solidarity with the UK — and what other measures could come next? Bernd Riegert reports from Brussels. (27.03.2018)

The daughter of the former Russian spy Sergei Skripal, who was poisoned in a nerve agent attack along with her father, is said to be recovering. Meanwhile, police cordoned off a play area near Skripal's home. (29.03.2018)