The prominent Kremlin critic has lost an appeal against a three-year prison sentence. Later Saturday, he will also face separate slander charges. 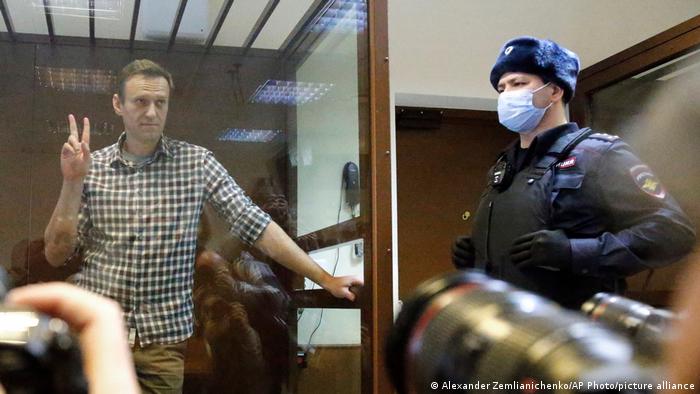 Alexei Navalny has said the charges against him are 'absurd'

Navalny had lodged an appeal against a three-year prison sentence handed down earlier this month for parole violation charges. The court upheld the sentence, but shaved off 1 1/2 months for time served.

The decision means Navalny will likely spend just over 2 1/2 years in a penal colony.

Navalny's spokesperson said the court's decision to keep Navalny behind bars is a sign that "there is no justice in Russia."

Navalny was due to appear twice in the court on Saturday for two separate cases he says are politically motivated and unlawful.

he was jailed earlier this month after he returned to Russia from Germany, where he was recovering after being poisoned with a nerve agent in August 2020.

Navalny has blamed President Vladimir Putin for ordering the poisoning. The Kremlin has denied having any involvement.

Navalny's case has opened a wide rift between Moscow and the EU, and sparked protests across Russia.

In the courtroom, Navalny appeared relaxed and argued from a glass cage that his whereabouts in Germany were known to Russian authorities, and that he had voluntarily returned.

"The whole question is, was I hiding or not hiding?" he told the court. "I bought a ticket and told everyone: I'm going home ... This is just absurd," he said.

DW's Russia correspondent Sergey Satanovsky said Navalny's lawyers had demanded Navalny's release in accordance with a ruling Wednesday  by the European Court of Human Rights (ECHR), which called his sentence "unlawful" and ordered his release.

Satanovsky said the judge had promised to take the ECHR decision "into account."

Russia is an ECHR member and is technically obliged to enforce the international court's decision, although implementation can often be delayed by years.

Russia said Wednesday that the ECHR's decision amounted to "pressure" and "interference" in Russia's internal affairs.

Satanovsky tweeted that Navalny told the court: "Blessed are those who hunger and thirst for truth, for they shall be satiated."

What is Navalny's second slander charge?

A separate trial in the same Moscow court is set to begin later Saturday on charges that Navalny insulted a World War II veteran who appeared in a Putin promotional video last year.

The video advocated removing presidential term limits, which would allow Putin to stay in power beyond 2024.

Navalny had described the people in the video as "traitors" and "corrupt stooges."

His legal team says both cases are attempts to silence Navalny, who is Putin's strongest political opponent.

Prosecutors in the slander case are looking for a fine and added jail time. A verdict is expected later Saturday.

Navalny ally Volkov: 'Our strategy is to be flexible and to be smart'