Security forces have opened fire on protesters in Mandalay, as anti-coup rallies honored a young woman who was killed by police at an earlier demonstration. UN Secretary-General Guterres spoke out. 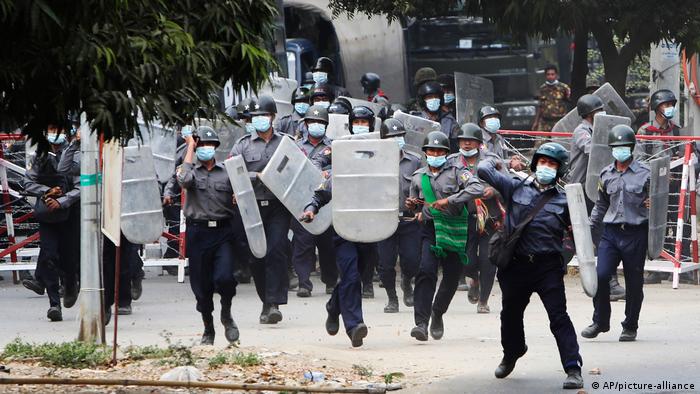 UN Secretary-General Antonio Guterres spoke out against the "use of deadly violence in Myanmar," in a tweet early on Sunday.

The country has seen over two weeks of protests after the military ousted civilian leader Aung San Suu Kyi on February 1.

"The use of lethal force, intimidation and harassment against peaceful demonstrators is unacceptable. Everyone has a right to peaceful assembly," the UN chief said.

"I call on all parties to respect election results and return to civilian rule," Guterres added.

What happened in Myanmar on Saturday

They marched to commemorate a 20-year-old woman who died after being shot by police at a demonstration on February 9 in Myanmar's capital, Naypyidaw.

About 30 others were injured in the violence near a shipyard, Hlaing Min Oo, the head of a Mandalay-based volunteer emergency rescue team said. Around half of them were shot with live rounds.

The protesters in Mandalay and Myanmar's largest city, Yangon, carried flowers and banners with photos of Mya Thwet Thwet Khine, who was confirmed dead on Friday after spending a week on life support in a hospital.

Some other protesters on Saturday held signs that read "CDM," in reference to the civil disobedience movement which workers in several industries have recently joined.

Police crack down on protests

According to The Assistance Association for Political Prisoners, an independent monitoring group, authorities have arrested at least 546 people since the coup.

The US is said it is "deeply concerned" by reports that Myanmar security forces have fired on protesters, US State Department spokesman Ned Price said in tweet on Saturday.

"We stand with the people of Burma," Price added. Myanmar is also known as Burma.

"The violence committed in Mandalay today is unacceptable," the French government said in a statement.

"The shooting of peaceful protesters is beyond the pale," Raab tweeted, adding "we will consider further action, with our international partners, against those crushing democracy and choking dissent."

The United States, Canada and Britain have recently announced sanctions on military generals.

The opposition in Myanmar called on international institutions to impose sanctions on the junta leaders. The bloc is set to discuss the situation on February 22.

The ethnic Intha people in Myanmar's Shan state staged a unique protest against the military junta, holding megaphones and placards on boats in Inle Lake, a popular tourist destination in the country.