Ahed Tamimi to be held in Israeli detention throughout her trial

The 16-year-old Palestinian was seen slapping and punching two Israeli soldiers in a viral video. She could remain in detention for months. Human rights groups have called for her immediate release. 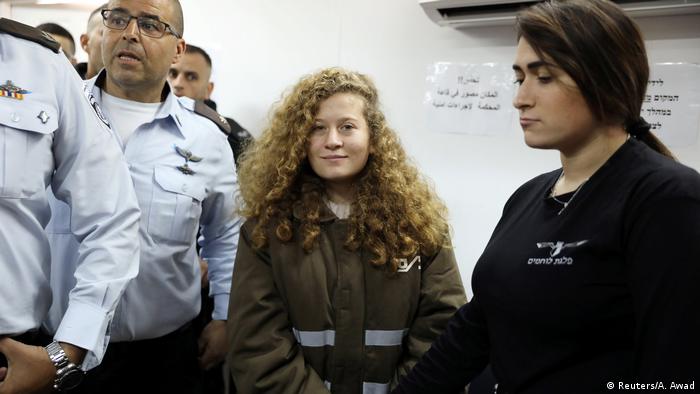 Ahed Tamimi, a 16-year-old who has been called the Palestinian Joan of Arc, has been ordered held in custody for the duration of her trial for hitting two Israeli soldiers in the West Bank. Announcing the decision, an Israeli military judge at Ofer Prison said: "I found no alternative other than to order her detention in custody until the end of proceedings."

After the hearing, which was attended by representatives from the EU, France and Sweden, the girl's lawyer, Gaby Lasky, also confirmed the news.

"The court said that because she is so dangerous there is no possibility of bail," she said.

Ahead of the decision announced on Wedesday, Tamimi's father Bassem told DW: "This court has been designed with laws and legal systems to punish the Palestinian, and therefore we expect prolongation, procrastination and heavy punishment to break the example of Ahed so that she is no longer a role model for her generation."

The young girl has achieved international notoriety and has become the focus of a heated propaganda war between Israel and Palestinians protesting the occupation of the West Bank.

In a video taken around the time of protests over US President Donald Trump's announcement that he would recognize Jerusalem as the capital of Israel, Tamimi can be seen kicking, slapping and punching two Israeli Defense Force (IDF) soldiers.

Tamimi is charged with 12 counts of assault. If convicted, she could face a very lengthy jail sentence. In addition to the events seen in the video, she is also accused of throwing stones, incitement and threatening.

Seventeen Palestinians and one Israeli have been killed in the tumult that has resulted from  President Trump's December 6 announcement.

Finish her life in jail?

Tamimi was arrested in a pre-dawn raid conducted by IDF soldiers at her family home near Ramallah on December 19 and has remained in custody since that time. Her mother, who can also be seen in the video, was arrested that same day and is also in detention. Her cousin Nour was arrested the following day but was later released on bail on January 5.

Following the arrests, Israeli Minister of Education Naftali Bennet, who leads the right-wing religious party Jewish Home, said: "The women seen assaulting Israeli soldiers in the video should finish their lives in jail."

International observers and human rights groups, such as Amnesty International, have called for the young woman's immediate release.

The UN Office for the High Commissioner for Human Rights has also criticized Israel for how it is dealing with Tamimi.

"The deprivation of liberty of children shall only be used as a measure of last resort and for the shortest appropriate period of time, and the best interests of the child are to be a primary concern," it said.

The case has shone a spotlight on what critics say is an unfair military justice system that abuses the rights of Palestinian minors in the West Bank.

When asked about the future, Bassam Tamimi  told DW: "If anyone guaranteed me that the occupation would be gone in one, two, three or even five years, I would rather teach my daughter ballet."

His picture of Israeli soldiers gazing at the Western Wall became one of the most iconic images of the 1967 Six-Day War. Veteran Israeli photojournalist David Rubinger has died aged 92. Here are some of his photos. (02.03.2017)

Israel has given the green light for new settler homes in the occupied West Bank, ending an eight-month lull in settlement expansion. The decision has dealt another blow to hopes of a wider Israeli-Arab peace deal.