Afghanistan: One deported, one evacuated — two very different stories | Germany | News and in-depth reporting from Berlin and beyond | DW | 26.08.2021

Farhad is desperate to get out of Afghanistan and come to Germany. Abdul Ghafoor has managed just that — although he really wanted to stay in Kabul. As gunmen patrol the streets of Kabul, everyone who's ever lived abroad tries to stay in hiding

When gunshots ring out on the streets of Kabul, Farhad* takes his 3-year-old son firmly in his arms and tells him a lie: A wedding is being celebrated nearby. "Happy shooting," he says. Firing shots into the air is a matrimonial tradition in Afghanistan, in honor of the bride and groom.

"My son can't yet understand what's happening in his country right now. He's just very scared of the loud bangs," says Farhad, adding that he can't explain to the child what's really happening.

Every day, Farhad writes in a Facebook chat about how he is doing. He is one of more than 1,000 Afghans who were deported from Germany to their home country since the end of 2016.

He was a minor when he came to Germany. He came alone, both parents were dead. He did not commit any crimes in Germany. But his asylum application was rejected, despite desperate attempts by German friends to support him and his application to stay in Germany.

Just like Farhad, every year thousands of Afghans try in vain to obtain a residence permit in Germany. Some 60% of Afghans' asylum applications were rejected. It was not until August 11 — just four days before the Taliban took control of Kabul— that the German Interior Ministry suspended the controversial deportations to Afghanistan.

Despite criticism from human rights organizations, the German government long maintained its position that Afghanistan was safe enough to continue deporting people there. Currently, there are still around 30,000 Afghans living in Germany who are
legally obliged to leave the country.

German airlift from Kabul 'started too late and ends too early'

On the Taliban's radar

Someone like Farhad, who has already been deported once, had no realistic chance of being flown out now as part of the German airlift. But he is desperate. "If the Taliban find out I've been living in Germany, they'll kill me," he says.

In fact, deported returnees like Farhad have been in more danger than others since the Taliban took power, Abdul Ghafoor confirms.

Those who have lived in the West pose a threat in the eyes of the Taliban simply because they lived abroad and may have a changed lifestyle, Ghafoor explains.

Ghafoor speaks from his own experience. He fled to Europe himself, was expelled by Norway in 2013, and deported back to Afghanistan. After his return, he founded an NGO, the Afghanistan Migrants Advice and Support Organization (AMASO), to help other deported returnees as well as internally displaced persons.

The returnees have a hard time in Afghanistan, he said, even though not all of those deported have broken laws in the countries they sought refuge. "Most people in Afghanistan think that these people must have done something wrong and that's why they were deported," Ghafoor says. 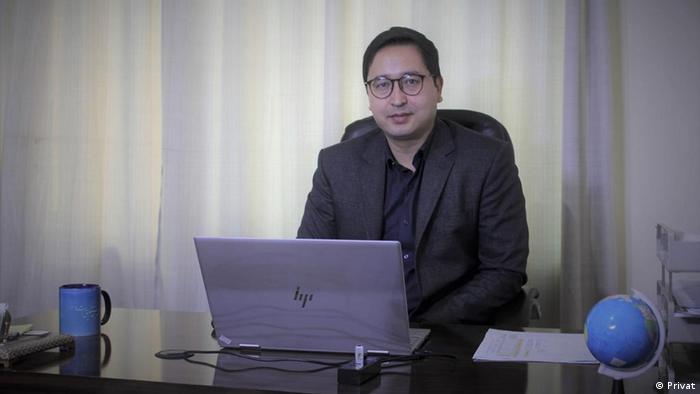 Abdul Ghafoor has helped Afghan migrants for many years

In safety in Hamburg

Ghafoor was well-known for his work, which also put his own life in danger. For a long time, family and friends pressured him to leave Afghanistan again. "I kept receiving threats. But I was able to deal with that," he says, adding that for a long time, he didn't want to leave. But when the Taliban took over Kabul, he saw no alternative for himself. He quickly destroyed all the documents in his office that contained names and addresses.

For a few days now, Abdul Ghafoor has been in safety, almost 7,000 kilometers away from Kabul, in Hamburg. His name had quickly been put on one of the coveted passenger lists. In fact, he was one of only seven passengers flown out of Kabul on August 17 by the Bundeswehr's first evacuation flight. He sat on an almost empty plane, overcome by his own emotions. "I kept bursting into tears during the flight," he tells DW by phone.

'You have to lie to save your life'

While Ghafoor is in safety, Farhad continues to live his real-life nightmare. His wife has not even dared to leave the house since the Taliban invaded Kabul; only he still goes outside to run the daily errands. German friends have sent him some money via Western Union. He still has about €20 in cash. He doesn't know what will happen when they've been spent.

Except for grocery stores, almost everything is closed in Kabul. There are far fewer people on the streets, hardly any children, few women venture outside, and if so then only accompanied by male relatives. When the Taliban were last in control of Afghanistan, they imposed strict rules on women's rights.

There are gunmen everywhere. Again and again, Farhad is stopped by Taliban fighters and interrogated. "Who are you? Where are you going? What is your profession? Have you ever worked for the police or for foreigners?" Always the same questions. He then says he is on his way to buy some food. And gives a false name. "You have to lie to save your life." The Taliban have not asked him for identification or other papers so far, he says.

A few times, Farhad has also taken his son. The child had been crying, desperate to get out into the fresh air. In order not to frighten the boy, Farhad says the armed, bearded men were something like the new police force in the city. Another white lie. Farhad does not believe that there will be any escape from Kabul for his family anytime soon.

Since he arrived in Germany, Ghafoor has been working non-stop. Every day, he receives messages and calls for help from his home country, and he uses social media channels to try to organize assistance. He is also in contact with his employees still on the ground in Afghanistan. He worries about them, "I haven't been able to do anything for them yet," he says.

Whether he wants to stay in Germany or Europe? Abdul Ghafoor has no answer to that at the moment. "I can't even comprehend yet what all happened and how quickly it happened. At the moment, I still feel a bit lost."

*Farhad is a pseudonym. DW is withholding his real name for security reasons.

Germany's Afghan support staff glad to be alive in Berlin

Two Afghans who helped the German military managed to the country before the Taliban took control. They told DW about their sleepless nights, fearing for those they've left behind.

Now safe in Ukraine, the head of the Afghan Film Organization is working to help dozens of other filmmakers flee the Taliban. She warns of a "genocide" of artists as the militant extremists take over Afghanistan.

Opinion: Merkel is letting herself off too lightly on Afghanistan

Chancellor Merkel has tried to justify Germany's Afghanistan policy in a government statement. She asked many of the right questions but provided none of the answers. This is disappointing, says Marcel Fürstenau.