Afghans narrate Taliban takeover on social media: fear, solidarity and resistance | Asia | An in-depth look at news from across the continent | DW | 21.08.2021

While Afghan citizens document the Taliban's violence, the militants are ramping up their social media presence as well. 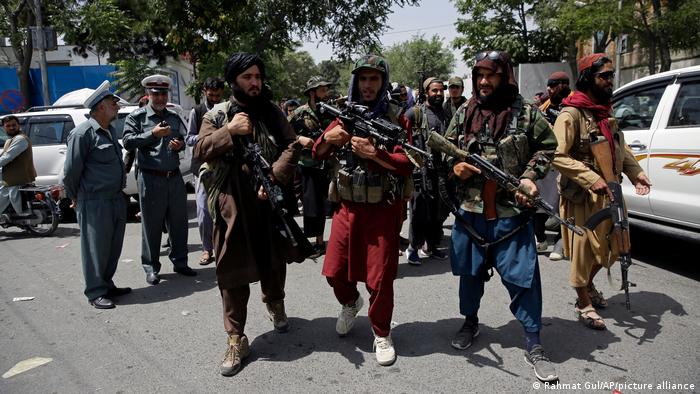 "It's been four days since I lost all motivation to work. Throughout years of working as a journalist, I have never felt so frustrated and useless. I receive calls and messages from people I know, who tell me they have been attacked, beaten up, and dragged out of their houses. What should I do? Where should I publish these [stories]? My hands are tied."

This is what Anisa Shaheed, a prominent Afghan journalist, tweets about her life under Taliban rule. Praised for her courage byReporters Without Borders, Shaheed had continued to work even in face of the expanding power of the Taliban and their increasing threats for journalists. This changed when the militia stormed into Kabul, upended the lives of all residents and put the careers of female professionals in serious jeopardy.

Since then, like many other Afghan citizens, Shaheed has had only her social media accounts to report what is going on in the streets.

The return of the Taliban has set off shockwaves through Afghanistan's social media. Hundreds of influencers, activists and even ordinary citizens are rushing to scrub their digital lives. Posts teaching people how to delete online information are extremely popular. The increasing online activity of Taliban members and sympathizers is adding to people's horror.

But some Afghans continue to use social media to document events and voice their fear, anger and determination to resist.

The risk that the Taliban's takeover will reverse the gains made for women's social rights remains the top concern among female users of Twitter. Despite the militia's spokesman expressing the group's commitment to letting women study and work in "accordance with the principles of Islam,” Afghan girls and women are petrified about their future.

"After high school graduation, I have been working and saving up to pay for my college tuition fees," writes Saher, a 19-year-old woman from Kabul, on her Twitter account. She used to work in a small clothes shop in Kabul's city center. "I will most likely lose that job since working in a shop is not regarded as appropriate for girls. All my plans are ruined."

Raha, a student in Kabul, did not dare to go out of her house for days. When finally she went out to buy groceries, the Taliban beat her for the visible tattoo on her hand.

"I don't want to emigrate anywhere, just want to live in a country free from Taliban, war and conflict. Is that too much to ask?" she writes in another tweet.

Laila F., a 30-year-old mother, says that the price of burqas surged sixfold overnight as more and more women feel it to be unsafe to walk in the streets without wearing such garments.  "I wish it was all a nightmare," she writes on her Twitter account.

In Herat, the third-largest city of Afghanistan, tweets describe how memories of the previous Taliban rule more than twenty years ago have muted the streets:

"People aren't sure if Taliban will try to ban music again, as they did in the past. Streets in Afghan cities used to be filled with the sound of music coming from TV sets, restaurants, and shops. Now a haunting silence has taken over the streets," writes Stanis, a Twitter user based in Herat.

Taliban ramp up on social media

These platforms consider the Taliban a terrorist organization and have long banned their content, but some members and sympathizers have managed to defy the restrictions and use the sites as a channel to spread their propaganda. Dozens of these new accounts publicly announce themselves as affiliated with the Taliban.

They post videos, images and slogans, often trying to amplify the assurances that the Taliban have brought peace to Afghans and convey the message that the Taliban are the true rulers of Afghanistan, different from the former corrupt administrations.

During the past week alone, their posts have racked up hundreds of thousands of views on Twitter and Facebook.

Resistance and solidarity amid fear and despair

In the midst of the news about violence, death and theTaliban’s manhunt, small-scale online solidarity initiatives are thriving.

While NGOs in big cities are demonstrating their efforts to support displaced people, the Afghan diaspora discusses ways to offer help to those who need to flee. Others work to hook up those in need with people offering to accommodate them in neighboring countries.

"My aim is to live my life, the way I did before, and dress the way I always did," writes Saher on her Twitter account. "Everyday resistance; this is all I can and will do against them."

More on the Taliban's return to power in Afghanistan

'We've said goodbye to the women's team:' Fears in Afghanistan for future of women's football

With the Taliban back in power in Kabul, there is widespread concern that women in Afghanistan will once again have their freedoms severely curtailed. The women's national football team and the local league could fold.