Support for the anti-immigration AfD has been eroding, but not in eastern Germany. The right-wing populists remain a force in Mecklenburg-West Pomerania, which has fewer refugees than any other state. How can that be? 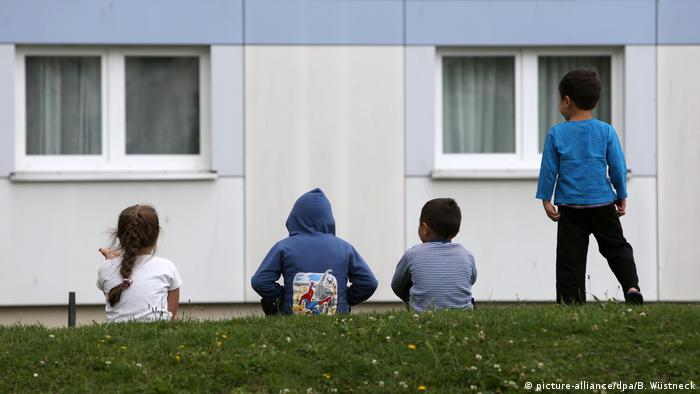 The right-wing Alternative for Germany (AfD) has seen better days. In the past year they have entered eight state parliaments in Germany, even taking more than 20 percent of the vote in two regional elections. Now, the party is down to seven or eight percent in polls ahead of Germany's national election on September 24.

Studies have concluded that the AfD has increasingly become a one-issue party articulating anger at Germany's welcoming stance toward refugees. So you'd think the party's support would be greatest in those areas of the country with the most refugees.

You'd be wrong. Refugees are distributed to Germany's 16 federal states on the basis of income and population levels, so that the poorer and less populous east gets fewer asylum seekers than the West. Yet the AfD continues to do well in many places in the East, bucking the national trend.

This is particular true of Mecklenburg-West Pomerania in the northeastern part of Germany - home to none other than Chancellor Angela Merkel. This state of 1.6 million inhabitants has fewer refugees per capita than anywhere else in the country. In the most recent opinion survey, published on July 23, 20.5 percent of people asked said they supported the AfD. 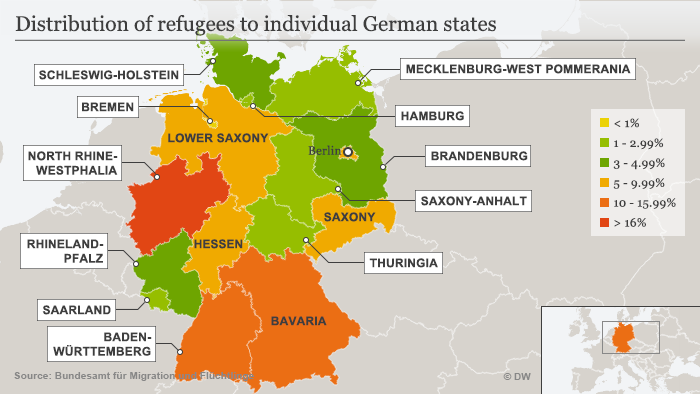 Infographic about refugees and German states

Shuttering themselves off from asylum seekers

Ulrike Seemann-Katz, who chairs the Mecklenburg-West Pomerania Refugee Council, is a woman who speaks her mind. Ask her why an anti-immigrant party does so well in a region with so few migrants, and you'll get a blunt answer: fear.

"Psychologically, it's very easy to explain," Seemann-Katz told DW. "Human beings are afraid of what they don't know, and what people don't know here are refugees."

She says that in rural regions in Germany's northeast, people have almost no personal experience of asylum seekers. What refugee homes there are exist as isolated islands with little support or contact with the outside world. Asylum seekers sent there tend to leave quickly for cities. Meanwhile, in a region where unemployment runs as high as three times the national average, many locals resent what they see as the preferential treatment given to refugees.

Read more: Right-wing populist AfD may sue to get on talk shows 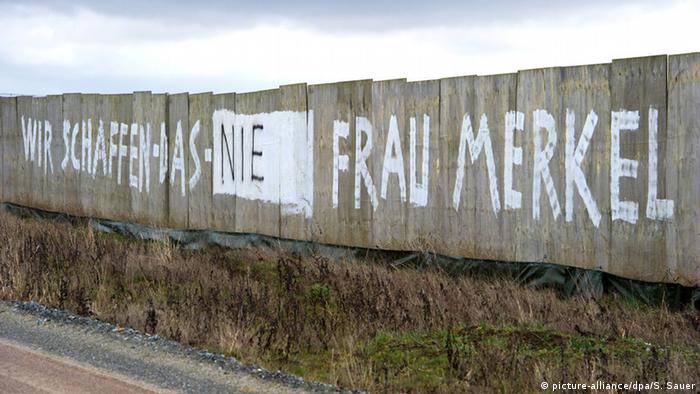 Seemann-Katz's voice becomes emotional as she reads out emails full of "pure racism" her organization regularly receives. One person complains of having to sweep the sidewalk in front of his house, while asylum seekers run around all day "with a smart phone in their left hand and a Red Bull in their right." Another simply writes: "Thanks a lot, Germany. We need new laws and more deportations."

Seemann-Katz has no doubt that the AfD's strength in her region is down to hostility to foreigners and especially asylum seekers. And she sees no solution for breaking the vicious circle of unfamiliarity that breeds fear and contempt.

"I don't think there's anything we can do," she says. "Refugees don't want to stay where they're not particularly welcome - that's only natural… If you walked with a group of refugees past the house (of an author of hateful emails), he'd quickly lower all the shutters."

When asked what motivates people to vote for the AfD, the mayor of Pasewalk, Sandra Nachtweih, answers with a list of resentments

"The fact that I feel disadvantaged by what we have here," Nachtweih, a left-wing independent, told DW. "That I'm not offered anything. That no one seems to care. That the refugees get preferential treatment. They get a new refrigerator and a new apartment while I don't. That's the frustration we see in relation to our efforts to help refugees."

AfD politicians from Mecklenburg-West Pomerania deny that theirs is a one-issue party. But the refugee question is the first thing they mention when asked about the reasons for their party's success, and they seem only too aware of the fact the absence of asylum seekers in the region either doesn't matter or actually makes it easier to enlist support.

Read more: What the terms left and right mean in the German election 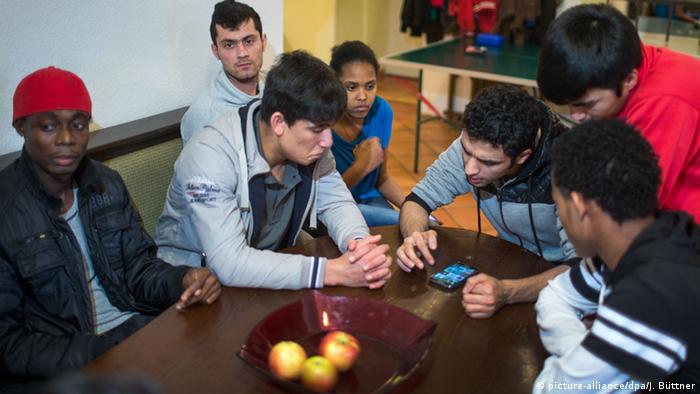 "People are afraid – they don't want to be swamped with foreigners," says regional member of parliament Jürgen Strohschein. "Where asylum policies are concerned you have to say that Mrs. Merkel was out biggest help in the election."

The irony is that according to a report issued last year by the federal government's commissioner for eastern German affairs, Iris Gleicke, the residents of Mecklenburg-West Pomerania are only hurting themselves with their anxiety. The northeast of Germany is blessed with the Baltic coastline, a huge lake district and some of the loveliest scenery in Germany, but according to the report, it needs to attract migrants to counter demographic shortcomings and succeed in future. 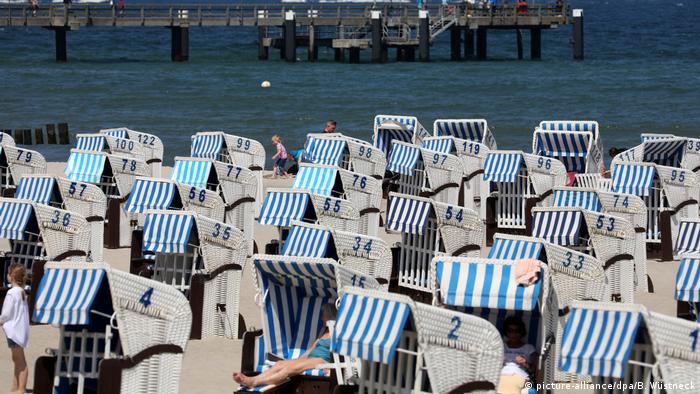 Thanks in part to its coastline, Mecklenburg-West Pommerania is one of Germany's most popular tourist destinations

The problem with politics

But this is an election year, and politicians from the mainstream parties appear to be wary of turning off potential voters in the East by acknowledging the ugly aspects of regional attitudes.

Earlier this year, Gleicke presented another study, commissioned by her office, which found that eastern Germans were disproportionately prone to right-wing extremism and that the cause had more to do with mentality than with socio-economic factors.

But on Thursday, Gleicke publicly disavowed that study, which was heavily criticized in eastern Germany, citing methodological problems. In response to a DW request for a comment on the AfD's popularity in Mecklenburg-West Pomerania, her office said that wasn't possible.

After last year's election, the head of the Angela Merkel's Christian Democrats (CDU) in Mecklenburg- West Pomerania, Lorenz Caffier, put his party's poor showing down to the emotional resentment of Merkel's refugee policy.

"There was only one issue, and the issue was and is refugees," Caffier said. But he, too, didn't respond to a DW request to talk about the AfD's popularity in his region.

Conversely, one politician who is talking about refugees is Angela Merkel's main election rival from the Social Democrats (SPD).  Martin Schulz has raised the possibility - and stoked fears - of a second wave of asylum seekers. Refugee advocate Seemann-Katz is no fan of this latest campaign move.

"I think it's very problematic that this has now become an election issue," she said. "There was always a consensus to keep this out of campaigns. Now, Mr. Schulz has put it back on the agenda, and I think that's a very big mistake."

A new report says Germany's federal states should steer refugees toward communities where integration is more likely. But would such communities accept more people in need at a time when migration itself is under fire? (22.11.2016)

The Without Borders Film Festival, live despite coronavirus restrictions 17.09.2020

Meet the Green politician with plans for Germany's ex-capital 05.10.2020

Germany's Greens are on the rise. Katja Dörner is one of their new mayors, taking up office in the former West German capital, Bonn. She wants a more open migration policy in the city that is home to several UN agencies.