Donald Trump-style populism has no chance in German election

A survey of voter attitudes suggests far more support for the center than for populists as Germany gets set to choose a new parliament. One finding was that the German electorate seems less "angry" than that of the US.

The anti-establishment frustration that swept Donald Trump to power in the United States and led the UK to vote for Brexit exists in Germany, but in a much more moderate form, which will not ultimately be the deciding factor in the national elections in September. That's the central conclusion of a Bertelsmann Foundation study of "populism" among people eligible to vote in the upcoming federal elections.

The researchers defined populism as hostility to the establishment, the belief that "the people" are basically a homogeneous group and the view that political leadership should be the direct expression of popular will. The study found that 29.2 percent of potential voters were thoroughly populist, 33.9 percent were somewhat populist and 36.9 percent were not populist at all.

Although a slight majority of Germans were frustrated with the way democracy works in practice, there was overwhelming support even among hard-core populists for democracy as a political system.

"People with populistic attitudes in Germany are disappointed democrats but not enemies of democracy," said co-author Robert Vehrkamp at the official presentation of the study in Berlin.

The same pattern applied to the EU, Vehrkamp said. Germans were critical of the EU in its current form while strongly supportive of the European bloc as a general concept. Germans seem to be less angry than Americans or British. Vehrkamp calls this "moderate populism." 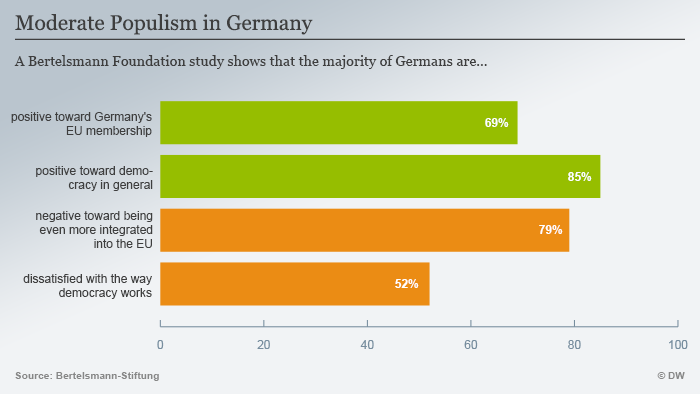 Trump without a 'ghost of a chance' in Germany

The lack of seething rage among most German voters has important political implications, as Vehrkamp illustrated with a comparison to the United States. Donald Trump, the political scientist said, had run a "purely populist" campaign in the 2016 presidential election, casting himself as the voice of the homogeneously conceived American people and portraying a vote for him as a vote against the political establishment and political elites.

The researchers asked their subjects in Germany what they would think of a German politician doing something similar and found, that among both populists and non-populists, demanding the disempowerment of political elites would hurt a politician or party's appeal.

Read more: What the terms 'left' and 'right' mean in the German election

"In Germany, not even populist-minded potential voters want to see elites stripped of their power," Vehrkamp said. "A typically populist anti-establishment campaign like the one Donald Trump ran wouldn't have a ghost of chance in Germany."

When asked why German and American voters feel so differently, Vehrkamp cited socioeconomic factors. He said that his study had shown that the poorer and less educated Germans are, the more likely they are to hold populist attitudes. The greater economic equity in Germany than in the US, Vehrkamp surmised, had led to fewer lower-income people who felt completely left out of the system and were consequently willing to call it entirely into question.

"That's why our situation is completely different than in the US or England, where populism is far more evident and expresses itself in election results and even in political majorities," Vehrkamp said.

But there is one group - and one political party - to which that conclusion doesn't apply. 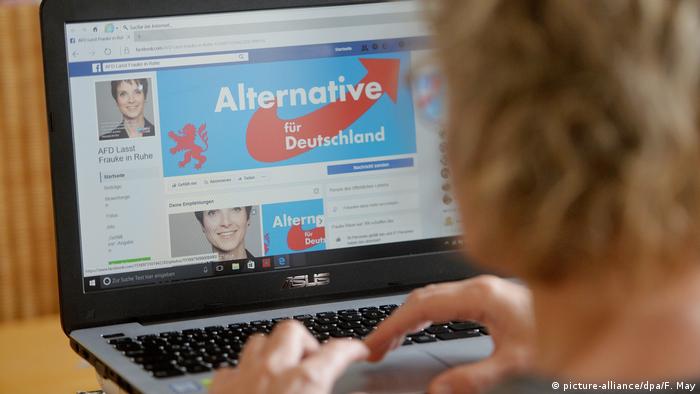 The AfD's popularity has receded along with German anxiety about refugees

The AfD as a one-issue exception

The Bertelsmann study also addresses the issue of how populist the seven parties likely to be in the Bundestag are. Here, too, populism was moderate. The conservative CDU-CSU and the Greens were deemed the least populist parties, while even the Left Party wasn't particularly radical in its hostility to the establishment.

The lone exception was right-wing, anti-immigration Alternative for Germany (AfD), which the study found to be almost off the scale of populist intensity. Interestingly, although the AfD began as a Euro-skeptic association, the study found that its members were no longer particularly interested in the EU. Instead, they were obsessed with a single issue: refugees.

Although the majority of Germans don't want to see huge numbers of refugees arrive to the country as happened in 2015, most also want to see Germany continue to take in some refugees and reject the idea of mass deportations. Thus the study suggested that the other parties should avoid adopting AfD positions in an effort to win more votes.

"If they did that, support among their own usual voters would decline," Vehrkamp explained. "All the other parties would be well-advised not to mimic right-wing populist AfD positions on either Europe or refugees. Distancing yourself from those positions promises to be more successful in the election."

A related study on the regional election in North Rhine-Westphalia this May suggested that the AfD recruits about half of its support from people who otherwise don't vote, with the rest coming from disenchanted former supporters of the other parties and people who cast protest votes.

"Probably the strangest result of the study in my eyes was that the biggest transfer of votes was from (left-wing, internet protest) Pirate Party to the AfD," Verkamp said.

The AfD took 7.4 percent of the vote in North Rhine-Westphaplia, enough for regional parliamentary representation - but a far cry from the over 20 percent the right-wing populists were polling in other German states less than a year ago. So how is the AfD likely to perform nationally in September?

The Bertelsmann researchers think that mobilization will be a key factor. As a one-issue party, the AfD will hope for an event that again stirs up widespread anxiety about refugees in Germany.

"A revival of the refugee issue would offer a chance for the AfD to mobilize voters," Vehrkamp said.

But, the political scientists said, the rise of the right-wing populists in 2016 in Germany, together with Brexit and Trump, have energized the political mainstream to defend the system and the institutions of democracy.

"The mainstream countermobilization against the AfD  has grown and even outweighs the AfD's mobilization of its own voters, so that when voter turnout goes up, results like those in North Rhine-Westphalia are possible," Vehrkamp said.

All in all, the Bertelsmann study paints a positive scenario for Germany's mainstream political parties and suggests that the "populist moment" is over. But studies are not votes. The true indication of how widespread populism is in Germany, and how angry the populists really are, will come when the ballots are counted on September 24.