Justice Minister Heiko Maas has warned that several parts of the anti-immigration party's election platform are illegal. AfD party candidates are facing accusations of racism and a possible charge of incitement. 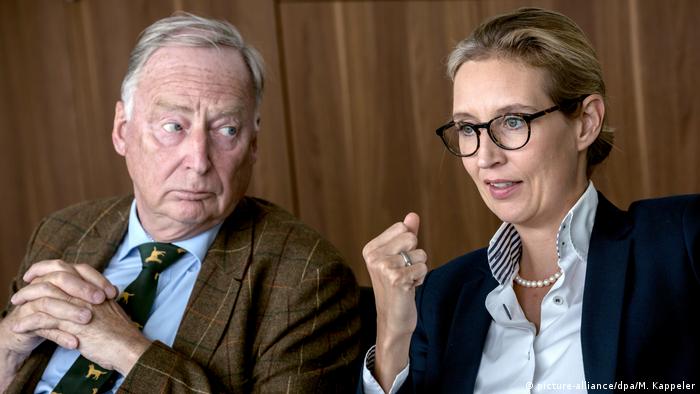 Amid the rising fortunes of the populist Alternative for Germany (AfD) party in pre-election opinion polls, the party on Monday faced renewed scrutiny of its manifesto when a senior minister claimed its program flouts the Basic Law (German constitution).

Justice Minister Heiko Maas warned that the AfD's religious, family, criminal and European policies are in clear violation of Articles 1, 3, 4 and 23 of the charter.

He singled out a blanket ban on minarets - the towers on mosques from which the muezzin calls the faithful to prayer - which the anti-immigration, anti-Islam party has promised to introduce if it were to win the September 24 federal election.

"Naturally, every religion must respect our constitutional order," Maas said in a guest article for the Frankfurter Rundschau newspaper. But he added that Germany's Basic Law permits "freedom of religion" and prohibits "discrimination on the grounds of faith or religious beliefs."

With just two weeks until the election, the AfD is polling between 8 and 11 percent, which could make it the third largest party after Chancellor Angela Merkel's conservatives and  the Social Democrats.

Maas warned that for the first time since 1949, a party was likely to clear what's known as the 5 percent hurdle to be represented in the Bundestag with an election manifesto that is partly unconstitutional.

In Germany's election, the electorate votes for a candidate (first vote) to represent their constituency and then a party (second vote).

The 5 percent hurdle has served to keep the far-right NPD and other extremist parties out of the German parliament until now.

AfD's Frauke Petry falls from favor ahead of Bundestag vote

At a recent election event in Mühlhausen, in the state of Thuringia, Gauland hit out against Germany's Integration Minister Aydan Özoguz (SPD), suggesting that she needed to be "disposed of."

The prosecutor's office said it received several complaints after the party put up posters in southern Germany, again using the term "disposal" in reference to Özoguz.

On Sunday evening, the AfD candidate said that he knew nothing of an investigation. "I consider that completely misguided," he said.

Over the weekend, the populist right-wing party's other lead candidate Alice Weidel was accused of using racist language in a 2013 email.

The writer of the email argues that Germany's ruling class is allowing German society to be destroyed by a flood of "culturally incompatible people like Arabs, Sinti and Roma."

"These pigs," the email reads, in reference to Angela Merkel's government, "are nothing other than marionettes of the victorious powers of World War II."

The AfD has claimed that the email, which was published by the Welt am Sonntag newspaper, is a forgery, but the paper has said it received it from an acquaintance of Weidel who has sworn a legal oath that it is genuine.

In a filmed  Internet appearance on Sunday evening, Weidel refused to comment upon the email, saying that was beneath her.

But when asked whether she would be willing to swear a similar legal oath that she was not the email's author, the AfD candidate did not take up that suggestion, saying only that the reporter "would see" what measures she would be taking in response.