Germany has been "overrun by Arabs, Sinti and Roma" states an email written by the AfD's Alice Weidel. If real, the email has sullied Weidel's image as her party's more moderate voice. 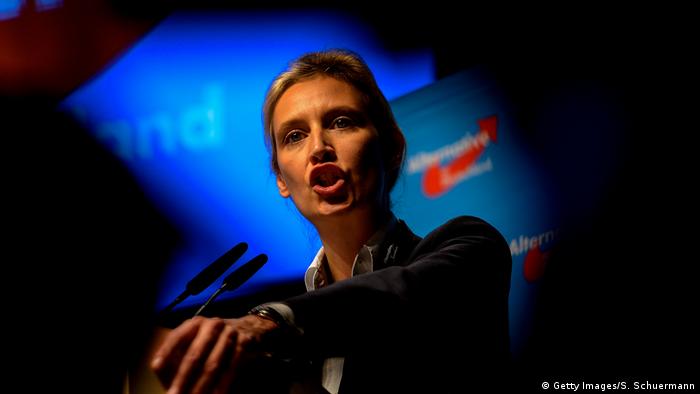 Welt am Sonntag reported it had a 2013 email containing "racist remarks and democracy-scorning theses" sent by the Alternative for Germany's (AfD) top candidate Alice Weidel.

The paper reported that the email, dated February 24, 2013, was sent from Weidel to a confidante while she was living in the German city of Frankfurt and working as an asset manager for Allianz.

"The reason why we are overrun by culturally foreign people such as Arabs, Sinti and Roma is the systematic destruction of civil society as a possible counterweight from the enemies of the constitution by whom we are governed," the newspaper quoted the email as saying.

Prior to the email's release, Welt am Sonntag said Weidel tried to stop the report from being published. The paper was contacted by Weidel's lawyers, who said the AfD politician was not the email's author.

Her lawyers told the paper that it was incorrect and unlawful to "publically claim that our client wrote this text or to even express that suspicion."

Weidel's populist party also backed her. AfD spokesman Christian Lüth told German news agency DPA that Weidel had assured him that she did not write the email, calling it "a fake."

Several days later, however, Alice Weidel changed her tune. She no longer claimed the mail was a fake, confirming the Welt am Sonntag, which had said it had an affidavit and other statements from people who were part of Weidel's personal and professional network at the time that proved the mail was not a fake.

At the bottom of the email, sent via iPhone, the author signed off with the name "Lille" – which was Weidel's nickname at the time, according to both Welt am Sonntag and DPA.

At the time the allegedly Weidel-penned email was sent, she became politically active in a party called "Wahlalternative 2013" or "Electoral Alternative 2013," the precursor to the AfD.

Weidel, an economist, is often regarded as the AfD's more moderate face. She's known for sidestepping journalist questions about the racist and xenophobic remarks from other leading party members.

"I have no use for nationalistic ranting," Weidel told the Südwest Presse in 2016.

The satirical party Die Partei has taken over 31 private Facebook groups followed by supporters of the populist Alternative for Germany. They have now ordered the right-wingers "to face Mecca when attacking Islam." (04.09.2017)