AfD in the Bundestag: Can Germany learn from Scandinavia′s far-right problem? | Germany | News and in-depth reporting from Berlin and beyond | DW | 28.09.2017

AfD in the Bundestag: Can Germany learn from Scandinavia's far-right problem?

The entry of the populist AfD into the Bundestag presents a new challenge to Germany's politicians. But Denmark, Sweden, and Norway have had far-right parties in their parliaments for some time now — how do they cope? 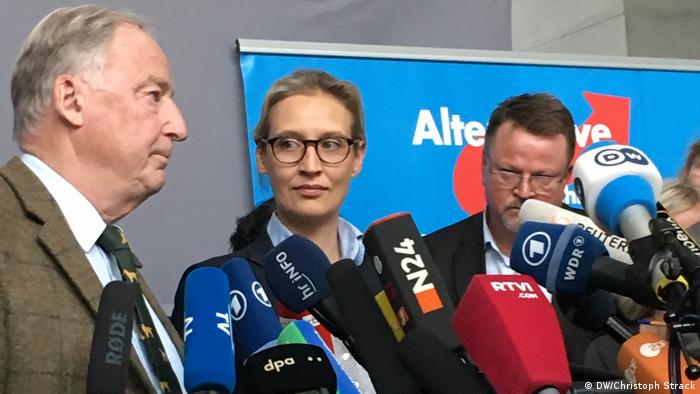 The Alternative for Germany's (AfD) success in last Sunday's election has given Bundestag members a problem none of them have dealt with before: the prospect of having to deal with 94 new colleagues with far-right views.

But Germany's neighbors to the north have dealt with the issue for decades. Denmark's Danish People's Party (DF), Norway's Progress Party (FrP), andthe Swedish Democrats (SD) have all long since established themselves in their various political landscapes — though they have experienced differing levels of acceptance from the mainstream.

The Bundestag is much more than a voting chamber for new laws — in parliament, AfD delegates will sit on committees that approve the German budget and oversee Germany's foreign secret services and domestic intelligence agencies.

So what could German members of parliament learn from the Scandinavian examples? If you want to weaken the far-right, is it better to ostracize the extremists or cooperate with them in an attempt to muffle the power of their provocation in the media?

Denmark has taken the latter route. The DF entered parliament in 1998, when it took 7.4 percent of the national vote, and lending its support to a minority conservative government just three years later, winning 12 percent of the vote in 2001. Since then, Denmark, a much less politically polarized society than Germany, has grown used to DF's presence. Though mainstream politicians often use populist slogans, outright neo-Nazism and open anti-Semitism is rare in Denmark, and the DF has duly shifted and been accepted in the conservative center. 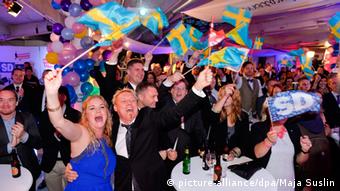 The Sweden Democrats became the country's third largest party in 2014

Sweden, however, presents a different problem. The SD, which had its neo-Nazi roots when it was founded in 1988, first entered parliament in 2010 with 5.7 percent of the vote — there, the mainstream politicians did all they could to shut the party out. But that has not served to weaken them, and the SD currently holds 46 seats in the Swedish parliament, after taking 12.9 percent of the vote in the 2014 election.

Meanwhile Norway has the most experience of the far-right in parliament. The FrP first entered parliament in the 1970s, and has settled into a role as a neo-liberal populist party, rather than an outright far-right party. Since 2013, it has been part of the Norwegian government, in coalition with the Conservative Party.

But these different parties and political situations are difficult to compare. "Countries can always learn from what other people are doing in other countries," said Anders Widfeldt, lecturer in Nordic Politics at the University of Aberdeen. "But there is a big difference between the Danish People's Party and the Norwegian Progress Party on the one hand and the Swedish Democrats on the other."

"The SD have a much worse reputation for being extreme, having a problematic background, with some Nazi connections," he explained. "Whereas a lot of people in Norway and Denmark see the DF and the Progress Party as just pretty normal parties."

That is reflected, for instance, in the cross-border ties between the parties - the Norwegian Progress Party has historically been careful about maintaining its distance from the SD.

Nevertheless, Widfeldt said, the debate about immigration in Denmark has shifted markedly to the right in recent years, with the focus now being on immigration as a problem - unlike in Sweden, where it is "mainly the SD that pursue that line."

Sifting out the idiots

For these reasons, Widfeldt is reluctant to make comparisons between any of these parties and the AfD - a much younger party which inevitably has a much wider range of personalities and viewpoints. Nevertheless, the AfD's leading candidate Alexander Gauland's recent statements about how Germany should no longer feel guilty about its military's actions during World War II struck Widfeldt as a bit much: "You would never hear someone even in the SD speak like that," he said.

But as for what other parties should do, "there is no recipe," as Widfeldt said. "I can't give clear advice." The Scandinavian examples show that neither marginalization nor cooperation really work, since right-wing, anti-immigration parties grow anyway. "The proof for the AfD is not so much how other parties are treating them, it is whether they can maintain internal unity," he added.

Former leader Frauke Petry's departure this week from the AfD, and her threat to start a separate party, showed an old problem that new far-right parties have — that they take a few years to settle on their identity. "There is a problem for these parties — that a lot of chancers, a lot of people seeking their luck, try to get into them, who are not at all good for the party's reputation," he said.

Göran Dahl, social researcher at Lund University, Sweden, sees the AfD as similar to the Swedish Democrats - the SD have done much to try to re-brand themselves as socially conservative rather than far-right, though they are often dogged by scandals about the far-right tendencies of individual members. "Two of the other right-wing parties say, 'Well, we have to at least talk to them about certain things,' though the others won't tolerate them," he said.

Sweden, Dahl said, went through two stages of dealing with the SD - first came denial. "It was: don't talk to them, and if you mention them you have to say this is a racist party," he said. "But since they entered parliament seven years ago, they had to talk to them. And I don't think that was successful either."