A nitty-gritty look at Germany′s loosened coronavirus lockdown rules | Germany | News and in-depth reporting from Berlin and beyond | DW | 16.04.2020

Angela Merkel's government has announced that lockdown regulations will be slightly relaxed, as society struggles with work and school closures. DW examines how public life will change in the coming weeks and months. 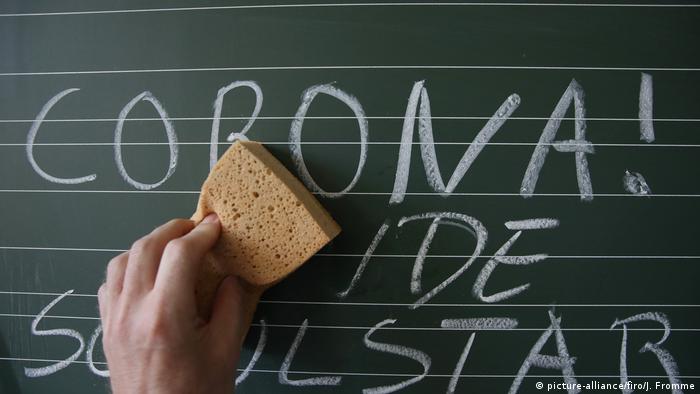 Chancellor Angela Merkel has outlined plans for Germany's slow return to normal life amidst its coronavirus lockdown. These include allowing smaller shops to reopen, schools to restart and a strong recommendation that people wear masks while shopping and on public transportation.

The regulations end weeks of uncertainty for many businesses, teachers and schoolchildren. However, the closure of bars, restaurants and religious buildings will remain in place without a specified end date.

Physical distancing regulations, including a ban on gathering with more than one person outside of an individual's household, will remain in force until May 3.

DW takes a closer look at the new rules for and what they mean.

Before announcing the new strategy, Merkel had a long conference call with the premiers of Germany's 16 federal states, as state governments are responsible for their own departments of education and health. For several state leaders, such as Michael Kretschmer of Saxony and Winfried Kretschmann of Baden-Württemberg, reopening schools was of paramount importance. 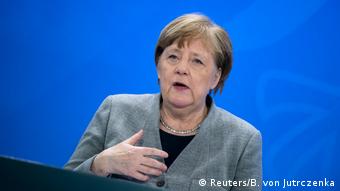 The need to send children back to school goes beyond the desire to relieve beleaguered parents balancing working from home and helping their kids with distance learning. Pupils spend years preparing for Germany's school-leaving exam, the Abitur. The exams are not only tightly organized and difficult to reschedule; students need their scores in order to apply for universities and colleges in the fall. A delay in exam-taking could clog the works of the German education system for years.

Therefore, students preparing to leave secondary school are set to return to school first, on May 4, along with those leaving primary school. However, in Bavaria, the state with the most cases of COVID-19, State Premier Markus Söder has said schools will not reopen until May 11.

Day care centers and kindergartens are to remain closed, as it is too difficult to ensure children maintain the required 1.5 meter (5 foot) distance from one another. However, "emergency care" services will be provided to parents of small children who have to go to work.

Schools must also present proposals for how they plan to adhere to strict hygiene and distancing rules. This demand has been criticized by some educators who say German schools do not have enough soap, disinfectant or protective gear like masks. The education ministers of all 16 states are working together on a solution they say will be provided by the end of April.

Shops considered essential, such as supermarkets, pharmacies and hardware stores, have stayed open throughout the lockdown. Customers have been allowed to enter only in restricted numbers and asked to stay away from one another.

Beginning on April 20, non-essential and smaller shops with an area of less than 800 square meters (8,610 square feet) will be allowed to reopen and stay open if they can also stick to these rules.

In a move that has been lightly chided on social media for Germany's love affair with the automobile, car dealerships will be one of the first non-essential businesses to reopen. The German auto industry, from factories to dealerships, is not only one of the biggest employers in the country; it is also one of the biggest employers in the world, with roughly 857,336 working in the sector. Auto sales, which totaled €426 billion ($469 billion) in 2018, are a backbone of both Germany's domestic and export economies, which have been hard hit by the pandemic-caused downturn. 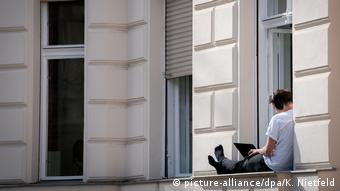 For many white-collar workers, the coronavirus pandemic has meant working from home, a novel practice for some

Hair salons will be allowed to open on May 4 as long as stylists wear protective gear and customers are seated far apart.

Due to the possibly very close proximity of customers, restaurants, cinemas, bars and theaters have been given no starting date to reopen, prompting many independent businesses across Germany to ask loyal customers to buy vouchers to keep them afloat. Restaurants and ice cream parlors, however, have been allowed to provide takeaway service and may keep doing so.

All businesses involved in major events, like soccer games and concerts, will likely have to wait even longer than bars and restaurants. Germany's ban on large gatherings will continue until at least August 31, Merkel confirmed.

Bavaria's Söder has said it is still possible that soccer matches may continue behind closed doors, but each state has to decide for itself.

To the consternation of religious communities, churches, mosques, synagogues and temples must remain closed until further notice. Germany's Jewish population was forced to celebrate Passover with synagogue doors shut, and Christians marked Easter at home. Muslims will begin observing Ramadan on April 24, with its communal ending feast, Eid al-Fitr, coming on May 24.

Religious leaders, upset at the lack of clarity on a date to reopen, are set to talk with German Interior Minister Horst Seehofer to discuss their desire to begin offering services again.

The chairman of the German Catholic Bishops' Conference, Georg Bätzing, has criticized the decision to maintain the ban on religious meetings. "Given the initial easing measures in other areas of public life, I cannot understand this," he said.

Merkel said face masks would not be required but that she "strongly recommended" wearing them while shopping or on public transportation. 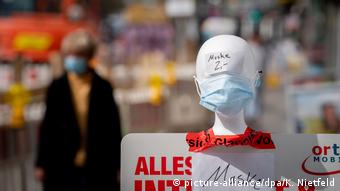 While some in Germany have already donned masks, they remain less widespread than elsewhere in the world

Ahead of her video conference with the state premiers, Merkel spent Tuesday listening to suggestions from scientific experts from the National Academy of Sciences Leopoldina and the Helmholtz Association of German Research Centers, the largest scientific organization in the country.

The scientists from Leopoldina had suggested the mandatory use of face masks in public, since even if they are not medical-grade, they can to some extent prevent asymptomatic carriers of the novel coronavirus from spreading infection.

In Germany, as in much of the Western world, the wearing of masks has failed to catch on in the past and can be stigmatized as an overreaction.

Berlin's drastic approach to battling the coronavirus was widely accepted by Germany's population. But that support could soon wane when strict measures are relaxed, writes Jens Thurau. (15.04.2020)