The eight European Union member states have signed a letter urging the bloc to get tougher on climate action. Germany, however, was not among them, with one EU climate expert calling the absence "conspicuous." 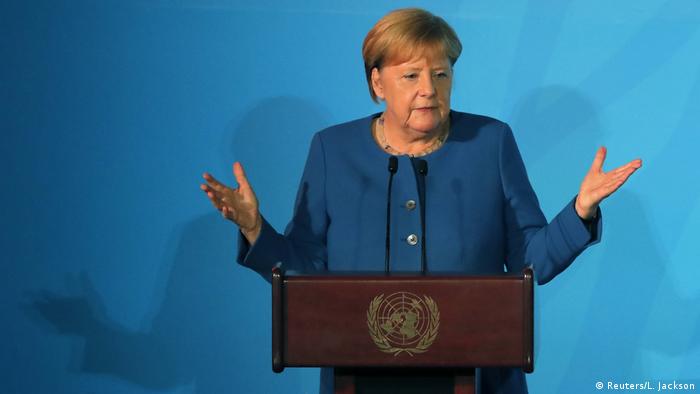 Eight European Union countries Tuesday called on the bloc to up the ante on its carbon dioxide reduction target, but Germany was not one of them.

Environment ministers from France, Spain, the Netherlands, Portugal, Sweden, Denmark, Latvia and Luxembourg all signed a letter to the EU's top climate official candidate, Frans Timmermans, calling on him to increase the objective to reduce emissions from 40% to 55% by 2030.

The letter urges the EU to get tougher on climate action "to underpin the European Green Deal to drive the in-depth transformation and bold measures needed across all sectors of the economy."

However, German Chancellor Angela Merkel, who previously indicated her support for the new objective, is facing stiff opposition from government ministries in Berlin to join the pact.

In at the deep end

Timmermans, candidate for the role of vice president for the European Green Deal, will appear on Tuesday in the European Parliament as part of his confirmation hearing, ahead of joining incoming European Commission President Ursula von der Leyen's executive team.

While there is broad, if not unanimous support for reaching net-zero emissions by 2050, there is a distinct lack of harmony in the EU over how to arrive at that target. In 2018, the majority of member states agreed on a 40% reduction, a goal that eight countries now feel is not enough.

EU climate policy adviser for Greenpeace, Sebastian Mang, was unequivocal in his criticism of Germany's stance, describing Berlin's absence from the letter as "conspicuous."

"Last week, [people] all over the country went to the streets and demanded climate protection," he said.

Mang argued that Merkel's government was pandering to big businesses and German carmakers.

Demonstrations around the world are calling on governments to do more to avoid climate catastrophe. In Germany, protesters have gathered in the capital as part of a global day of "civil disobedience." (07.10.2019)

New Zealanders vote to legalize euthanasia but not cannabis 1h ago

Coronavirus: EU at risk of being overwhelmed, says Von der Leyen 4h ago