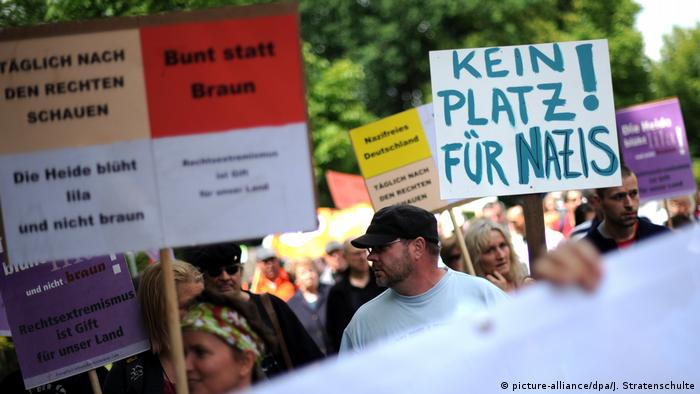 About 650 demonstrators prevented supporters of the extreme-right National Democratic Party of Germany (NPD) from marching in the northwestern German village of Eschede.

Police said demonstrators blocked a road into the village from an estate where several NPD supporters were staying, preventing 10 of them from driving down a road to the village in a van equipped with a loudspeaker.

Public broadcaster Norddeutscher Rundfunk reported that the demonstrators used whistles, banners and chants to deter the NPD members. Police said the event remained peaceful and there were no reports of violence.

Police estimated that roughly 40 NPD supporters had been staying at the estate for a so-called winter solstice celebration.

Local media reported that the NPD rally had been scheduled in November, and that it was set to take place under the motto, "Eschede's beautiful side — give home and culture a place." The NPD members had reportedly intended to approach Eschede with torches, flags and protest signs.

The counterdemonstration was organized by the Südheide Network against Right-Wing Extremism, the Celle Forum Against Violence and Right-Wing Extremism and the German Trade Union Confederation under the motto "Together against the Nazi meetings in Eschede."

Last month, more than 7,000 demonstrators took to the streets of Hannover to protest another NPD rally.

The NPD state association of Lower Saxony reportedly purchased the estate near Eschede in June for the purpose of holding today's rally.

The far-right Alternative for Germany party has asked its members for cash as it faces financial trouble. The party was fined €400,000 over illegal campaign funding and faces potential legal battles in the future. (20.12.2019)

The far-right Alternative for Germany party wants to attract "middle-class" voters by pursuing a more "moderate" path. The idea is likely to be met with opposition from the party's ultra far-right wing. (01.12.2019)