German authorities identified over 32,200 right-wing extremists in 2019, according to a report. Much of the rise has to do with authorities counting groups affiliated with the far-right AfD for the first time. 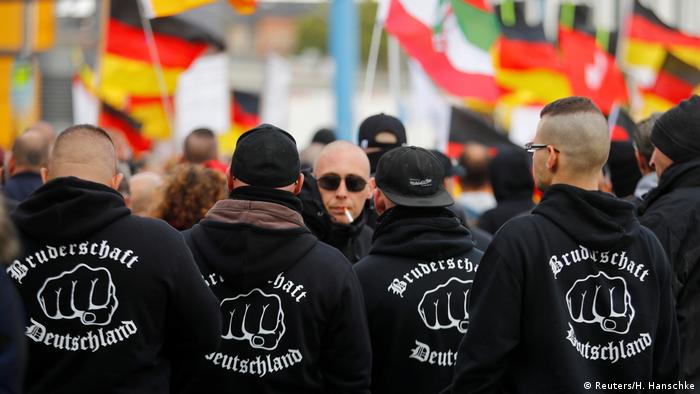 The number of right-wing extremists active in Germany rose significantly in 2019, the Berlin-based Tagesspiegel newspaper reported on Monday.

That figure is a third higher compared to 2018, when authorities counted 24,100 people involved in right-wing extremist networks.

One of the main reasons for the spike is due to the BfV including groups affiliated with the far-right Alternative for Germany (AfD) for the first time in its count of right-wing extremists.

In January this year, the BfV took aim at the extreme-right faction of the AfD known as "Der Flügel" (The Wing) as well as the party's youth wing "Junge Alternative" (Young Alternative) over suspected extremism.

In January, the BfV declared both AfD-affiliated groups "suspected cases" of right-wing extremism, increasing observation to investigate whether they pose a threat to constitutional order.

The designation means that the BfV can save personal data on members of the AfD groups and use undercover informants and other intelligence methods to collect information.

The BfV stopped short of classifying the entire AfD as a "test case" for increased observation after a court ruled that authorities failed to justify the designation.

The anti-immigration AfD has been criticized for fostering an atmosphere of hate in Germany that encourages political violence.

This year also saw several deadly incidents involving suspected right-wing extremists in Germany, including an attack outside a synagogue in the eastern city of Halle that killed two people in October. Pro-immigration politician Walter Lübcke was also shot and killed by a neo-Nazi extremist in June.

Death threats have been sent to Green lawmaker Dirk Adams and to an ally of Angela Merkel, Mike Mohring, in the eastern state of Thuringia ahead of elections. At least one threat ended with "Heil Hitler." (21.10.2019)

Right-wing militia groups say they patrol where police turn a blind eye. But with criminality dropping and more police than ever in Germany, analysts and politicians say their motives are more sinister. (18.11.2019)

After a series of bomb threats were sent to mosques and media companies in Germany this summer, authorities have now zeroed in on seven suspects. The threats carried the signatures of several right-wing extremist groups. (09.10.2019)