A shout pierces the quiet of a Tuesday afternoon in front of Berlin's baroque cathedral in the city center. "Hey, you!" yells Oliver Niedrich, a patrolman with a local militia, before chasing after two women begging for change. He believes them to be pickpockets, but furnishes no proof.

The women leave before Niedrich catches up to them. But the pursuit is enough to attract the attention of nervous bystanders — and police officers on patrol in the area.

"Sometimes we come across people who don't particularly like us," Niedrich says after the police have checked his identification and sent him on his way. "The police come on account of us, but we don't mind — at least they come to the area." He knows that his actions — including wearing official-looking red vests — are technically legal, as long as he does not detain anyone or use violence. 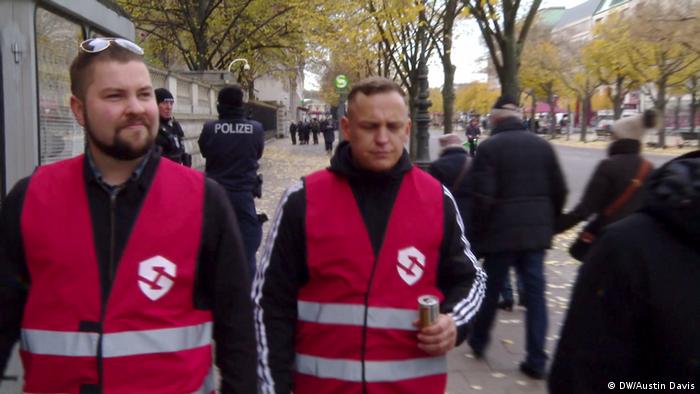 Niedrich is one of about 20 militiamen in Berlin with a "citizen patrol" initiative. In groups of two or three, the red-vested men patrol neighborhoods in Berlin they claim are areas where petty crime is rife. Their initiative is called "Establish Protection Zones" ("Schafft Schutzzone"). It is abbreviated as "SS," which in Germany immediately brings to mind the notorious Nazi-era "SS" — the paramilitary "Protection Squadron" that persecuted millions and was directly responsible for genocide. Niedrich rejects any such connection.

The "Establish Protection Zones" initiative, an offshoot of Germany's extreme-right National Democratic Party (NPD), says the areas it patrols are often popular tourist areas, as well as those with growing immigrant communities. 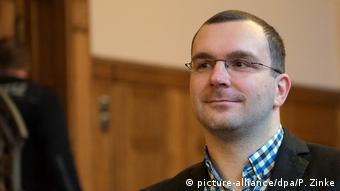 "Lots has changed through the influx of foreigners," claims Sebastian Schmidtke, deputy NPD chairman in Berlin, who organizes the militia. "That's unfortunately the reality. And you can't close your eyes to reality." Schmidtke has numerous previous legal convictions for "incitement of the people," a hate crime statute often applied in cases of Holocaust denial and racial, religious or ethnic insults.

His statement jars with the facts: In reality, criminality is falling across the board both in Berlin and throughout Germany, according to official figures.

Coupled with the fact that police presence is at an all-time high, policymakers and analysts are concerned that the growing number of militias across Germany have more sinister goals than they let on: Intimidating foreigners and playing into public fear for political gain.

Citizen militias are no new phenomenon in Germany. After German reunification in 1990, regional governments, especially in the nation's new rural eastern states, applauded citizen initiatives to keep the peace in their towns.

But 2015's influx of refugees and asylum-seekers brought a new dynamic to the practice, says Berndt Wagner, a criminologist and director of EXIT Deutschland, a nonprofit organization that helps people exit neo-Nazi groups.

"People are inflamed by the prospect of criminality at the hands of foreigners and a decline of circumstances — despite the fact that criminality appears to have leveled off," he said.

In 2018, criminality nationwide sank by 3.5%, especially in the areas of sexual assault, theft and fraud, according to national statistics. In Berlin alone, reported incidents of pickpocketing fell by 26.2% in 2018. The number of non-German perpetrators in Berlin barely budged when accounting for small violations in immigration law, and federal statistics indicate that the number of employed police officers reached a two-decade high in 2017.

Read more: German crime rates and the culture of fear 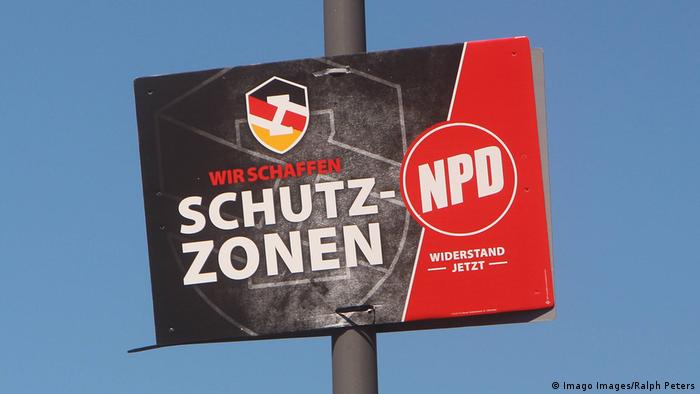 Given such figures, it is not criminality that Germans fear, but rather a diversifying society, says Wagner. It's why these militia groups — which can legally assemble, but not apprehend suspects unless attacked — attract extreme right-wing ideologues. Some see them as society's "clean-up crews."

"The NPD is slipping into the public spirit to pursue their politics," he said.

The first subheading of the NPD's party platform in Berlin reads "The Problem of Foreigners" and lays out ways to close Germany's borders, bar immigrants from receiving jobs and social benefits, and preserve Germany's national identity. The party's website also prominently displays images of its logo-wearing patrols, superimposed with slogans like "Protect Germans!" and "Germans helping Germans!" Multiple attempts to disband or ban the party entirely have failed in courts. 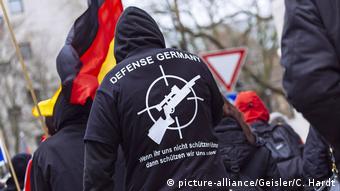 A right-wing militia member in Cologne

But the Berlin chapter of Germany's domestic security agency has closely watched the party's militias since they began forming in 2018, a city spokesperson confirmed. Earlier this month, the government declared these militias to have the "potential for right-wing terrorism."

"It's naive to compare us with terrorists," says Schmidtke as he waits for his colleagues to return from chasing off the two dark-skinned women. "We're doing a patrol, having a look around [to ensure] that the area is safe."

People react positively to their patrols, Schmidtke insists. Indeed, shortly before the police arrive, a lunch counter worker comes up to thank them. 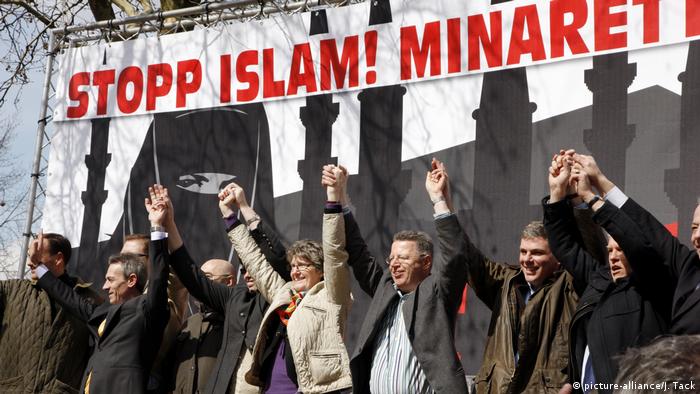 The extreme-right NPD, here at a rally in western Germany, has made it their task to protest against Islam

Some 300 party members walk beats in almost every German state, says Schmidtke. In Berlin, they have even had requests by parents to walk their kids to school.

"I personally don't care what they call us," he says. "We're doing this out of conviction and see it as a reasonable thing to do. If that's 'right-wing extremism,' I really don't care." 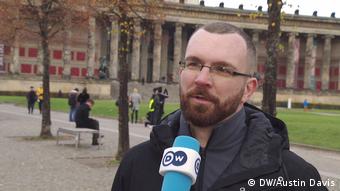 But a 65-year-old pensioner from Berlin, who saw the scene play out in front of Berlin's cathedral, says she does.

"Of course, there are people everywhere who want to steal from you," says Gabrielle, who declined to provide her last name out of privacy concerns. "But extra protection for that? No thanks."

Not everyone feels as secure as Gabrielle, though. A study on German society's biggest fears released earlier this year by the Berlin Social Science Center showed that one in three respondents feared "foreign infiltration" on account of too many immigrants. Over half feared criminality.

The group's patrols are obviously "polarizing," says Oliver Niedrich, a bit out of breath from his recent chase. "But we know exactly who we are."

Members of the far-right NPD have videotaped themselves "patrolling" Berlin trains. Their call for "protection zones" for Germans has been labeled by authorities as attention-seeking from an irrelevant party. (18.07.2018)