Members of the extreme-right NPD have videotaped themselves "patrolling" Berlin trains. Their call for "protection zones" for Germans has been labeled by authorities as attention-seeking from an irrelevant party. 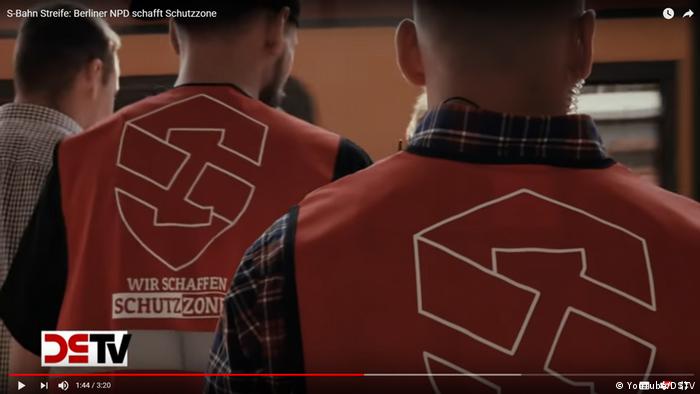 Dramatic music plays as a handful of men stride confidently through a Berlin urban train (S-Bahn) station. A couple of them are wearing orange high-visibility vests with an S-shaped logo on the back, carrying walkie-talkies. They move along the carriages, chatting to passengers.

In voiceovers and statements to the camera, the various functionaries of the far-right National Democratic Party (NPD) explain that they are patrolling the "hotspots of criminality" to protect Germans from violence and crime they say is perpetrated by migrants.

The propaganda video is part of a campaign by the NPD to set up so-called "protection zones" where they accuse German authorities of not exercising their power to fight crime on behalf of "our compatriots" — by which they mean Germans without a migration background.

Several Berlin-based newspapers reported Tuesday on the video, which was posted in early June and received only a few thousand views.

Cause for concern or social media stunt?

Federal police, responsible for securing Germany's rail network, are investigating whether the video broke any laws. Rail operator Deutsche Bahn (DB) said it was filmed without permission, in breach of its house rules.

A DB spokesperson told the Berliner Morgenpost newspaper, which first reported the story, that it was their job, along with police, to ensure a high standard of security.

"We have 750 Deutsche Bahn security guards doing just that. They protect all our passengers, no matter where they come from," the spokesperson said.

The NPD, which espouses neo-Nazi ideology, gained less than 0.5 percent of the vote in September's federal elections.

In January 2017, Germany's constitutional court ruled against banning the party, arguing that although the NPD had an anti-constitutional attitude, it was too irrelevant to damage democracy. 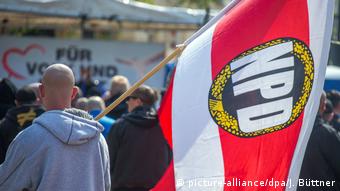 This year, the German Cabinet backed a move to ask the country's highest court to cut off the NPD from state funding for six years.

Representatives from the parties in the Bundestag responded in the Berliner Morgenpost to the video with a mixture of condemnation and disdain - with many saying it was an attention-grabbing stunt that they didn't want to dignify with a reaction.

In an opinion piece, the Berliner Morgenpost summed up the response, saying extremists threatened with obscurity sought to provoke.

"The idea [of vigilante patrols] isn't new, and its charm – in the eyes of the extremists – is that it first seems harmless, and even worth supporting, if supposedly courageous people stand by their fellow citizens. But in reality it's a call to hatred and agitation against the state."

Police registered dozens of criminal offenses and infractions at Germany's largest neo-Nazi rock concert. Opponents were disappointed that the courts did not stop the event going ahead. (10.06.2018)

Another attempt to ban the NPD has failed. That is annoying for those who sought the ban, yet it confirms the strength of the German constitution. After all, the NPD is no longer a real threat, says Volker Wagener. (17.01.2017)