Horst Seehofer has presented Germany's latest crime figures for the first time since becoming interior minister. The stats show a 10 percent overall decrease in the past year, but upward trends in certain hate crimes. 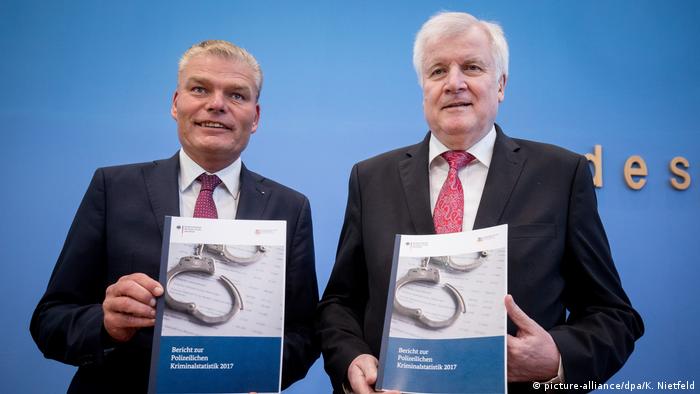 "Germany has become safer," Interior Minister Horst Seehofer proclaimed on Tuesday morning in Berlin, as he presented the latest crime statistics for the first time since taking over the post in the new German government.

The latest figures show that some 5.76 million crimes were reported in 2017, 5 percent fewer than in the previous year and the lowest number since 1992. Taken as a percentage of the population, the crime rate is actually at its lowest in 30 years, Seehofer said.

However, Seehofer's press briefing still had a somber tone to it. The interior minister acknowledged that the latest trends come at a time of public wariness, fueled largely by an increase in terror attacks in recent years, coupled with the influx of hundreds of thousands of refugees. 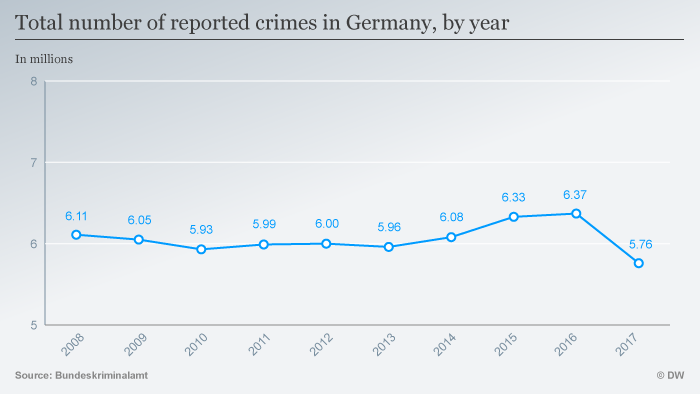 The latest figures show that 44 percent of the German population feels less secure today than they did a few years ago.

"There is no reason to sound the all-clear and much remains to be done" Seehofer said, adding that rule of law must protect itself against all forms of extremism and terrorism.

However, Andre Schulz, the head of Germany's Federation of German Police Officers, described the differentiation between German public sentiment and actual safety as "a paradox," adding that the two had no bearing on one another.

The statistics separately list the number of offences perpetrated by non-German nationals. Here the number of incidents perpetrated by migrants also dropped significantly — by 23 percent from around 950,000 to just over 700,000. However, Seehofer pointed out that this sharp drop was mostly due to fewer instances of illegal migrants arriving and settling in Germany.

Politically motivated crimes fell for the first time in four years and made up just 0.7 percent of all reported criminal incidents.

Attacks on asylum and refugee shelters dropped significantly by 69 percent to just over 300 reported incidents. The number of attacks on immigrants returned to the level recorded before the 2015 migrant crisis and the influx of some 1 million refugees into Germany.

Despite the positive downward trend, Seehofer stressed that every reported incident was one too many.

Anti-Semitic attacks on the up

Worryingly, however, there was a notable 2.5 percent increase in the number of anti-Semitic attacks, taking the total number in 2017 to 1,504 cases. Seehofer acknowledged a rise in so-called "imported anti-Semitic crimes," referring to attacks on Jews perpetrated by Muslim migrants. However, the minister stressed that the vast majority of such incidents, some 94 percent, were perpetrated by right-wing extremists.

Seehofer directly referred to several recent instances as a "new form of anti-Semitism" that urgently needed to be addressed, including the controversy surrounding the Echo music prize and the attack on an Israeli boy who wore a yarmulke, or kippah, in Berlin.

Despite the increase of prejudiced crimes against Jews, Seehofer praised the work accomplished so far by Germany's newly appointed anti-Semitism commissioner, Felix Klein.