At a memorial to victims of neo-Nazi terrorism, the chancellor said the government must prevent a resurgence of such hatred. Her comments came shortly after several politicians received death threats from the far-right. 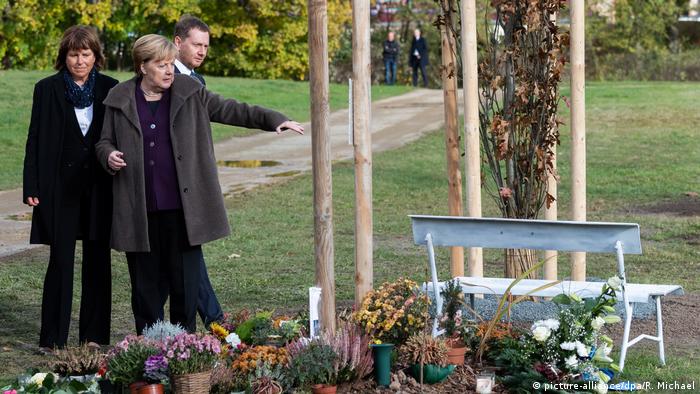 "As a nation we have to ensure that these things don't repeat themselves," German Chancellor Angela Merkel told reporters in the eastern German town of Zwickau, where a new memorial in honor of the victims of the right-wing extremist cell National Socialist Underground (NSU) was erected.

The memorial consisted of 10 trees planted across a sprawling field in the city center, one for each of the group's 10 victims. Between 2000 and 2007, the group's three leaders were based in Zwickau, where they evaded authorities and orchestrated attacks across the nation with the help of underlings. Police largely ignored the crimes, directed at immigrants, and failed to trace connections between them for years until a policewoman was also killed by the group.

"It's our mission that something like this never happens again so that these families are not always portrayed as victims, but rather can once again lead a good life in Germany, just as we all wish to," she said.

Over the past week, high-level politicians from parties representing the entirety of the German political spectrum have fielded death threats. This past summer, one of those threats became reality when regional politician Walter Lübcke was gunned down in his home in central Germany. And in October, a right-wing extremist gunman killed two in Halle, just northwest of Zwickau, after failing to gain entry into a synagogue to carry out a massacre on a Jewish holiday.

"We've experienced in the last years and months how thoughts become words, and words become actions," he said. "We have to contradict anti-Semitic, right-wing ideas wherever they crop up."

Just across the street from the memorial site, protesters chanted "Merkel must go!" and "propaganda!" as the chancellor attempted to pay her respects to victims and address schoolchildren and local officials.

Such a scene underscored an urgent need for a public reckoning with right-wing acts and ideologies, Kretschmer added.

"We've come together at this site to pay our respects to the innocent who were murdered, and there are people protesting that," he said. "It tells you about the times we live in and the attitudes of these people."

It took German authorities almost a decade to connect 10 murders against largely Turkish business owners and trace them to the NSU, sparking an investigative committee in the German Parliament and a national outcry about authorities' blind spots to right-wing terrorism.

Those blind spots still haven't been illuminated, townspeople told DW. Last month in Zwickau, the first memorial tree was chopped down by vandals, and the far-right Alternative for Germany (AfD) party continues to gain momentum in the region, they mentioned.

Such developments, coupled with the fact that Chancellor Merkel's commemoration was closed to the public and did not include victims' family members, cast a shadow over an event meant to help a nation heal.

Gamze Kubasik, whose father Mehmet Kubasik was killed by the NSU in 2006, criticized the handling of the memorial in a statement released through her lawyer. "Of course, I think it is good to remember my father’s murder and to remind people in Zwickau that the NSU neo-Nazis could go on murdering people undisturbed for years. But I find it outrageous that no one asked me as a [victim's] daughter in advance, or informed me, or even invited me to the opening."

Several locals echoed her sentiments. "Why weren't they invited? Why couldn't townspeople take part?" asked 76-year-old Ernesto, a pensioner from Zwickau who withheld his last name out of privacy concerns. "It's a weakness of this German government — it's no wonder that sentiment of the people is moving toward the AfD."

Kubasik also tied the handling of the event to the way in which the murder investigation was fumbled. "I also believe that the chancellor is afraid to face our questions and allegations. Back then she promised us to clarify things fully; as of today that still has not happened. That's probably why we have not been invited."

Others applauded the chancellor for fitting the ceremony into her schedule: "It's not just about the NSU, it's about fighting against forces in society that gave way to it," said Barbara Schumann, 70.

The key to doing so is starting discussions about right-wing extremism and racism early on, said local resident Heige Klix, 58, citing last week's "shocking" regional election results in the neighboring state of Thuringia, where the AfD won a quarter of votes and experienced newfound support from those under 25, according to polling data.

"Education — we need to start young," she said of how Germany can better combat right-wing extremism. "Not enough is being done in that department."

Jakob Springfeld, 17, a local student who spoke after the chancellor at the event, echoed that sentiment, calling for an education and documentation center in Zwickau about the NSU's terror spree.

"We hope that it won't just be that we've planted trees," he said. "Zwickau needs to show that we're more than just Nazi problems."

One of the highest-profile neo-Nazi trials of recent years is slowly drawing to a close. DW gives you the background to an affair that has shaken Germany. (27.04.2018)