Germans took to the streets after the verdict delivery in the National Socialist Underground trial to demand that investigations continue into the series of right-wing extremist murders — and into state failures. 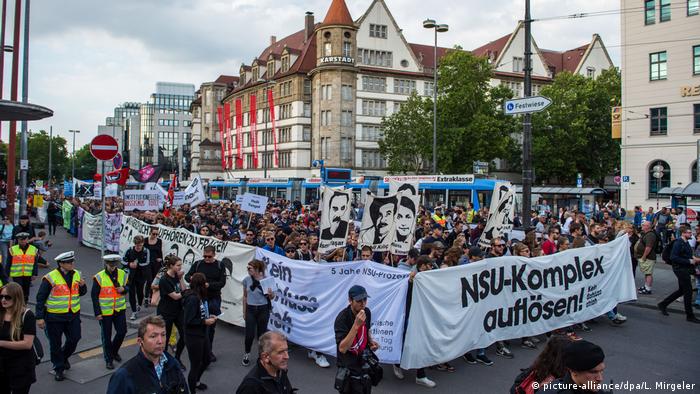 "Not the last word" was motto for numerous protests held across Germany on Wednesday in reaction to the verdict in a neo-Nazi terror case, one of the most important trials in the country's history.

The slogan echoed the sentiments of victims' relatives, who have said the verdict brings them little closure since state and media failures over the investigations into the murders and trial have yet to be clarified.

Earlier on Wednesday, a Munich court found Beate Zschäpe, a member of the right-wing extremist National Socialist Underground (NSU), guilty of 10 counts of murder and also convicted other co-defendants.

Protesters nationwide demanded that investigations into the racially motivated murders committed by the NSU between 2000 and 2007 continue despite the delivery of the verdict.

"The NSU was not a trio," some 1,000 protesters in Berlin chanted, referring to the frequent claim that the terror group was not an isolated terror cell made up of Zschäpe and two now-dead members, Uwe Böhnhardt and Uwe Mundlos, but rather part of a broader right-wing extremist network. Society and state was complicit

The demonstrations, which were organized by left-wing groups and victims rights' organizations, also called on society to continue examining its own complicity in the murders.

"The social conditions that made the NSU possible continue today," the Alliance Against Nazi Terror & Racism wrote on its event website. The group organized the protest in Munich, the site of the trial, and drew around 3,000 people. 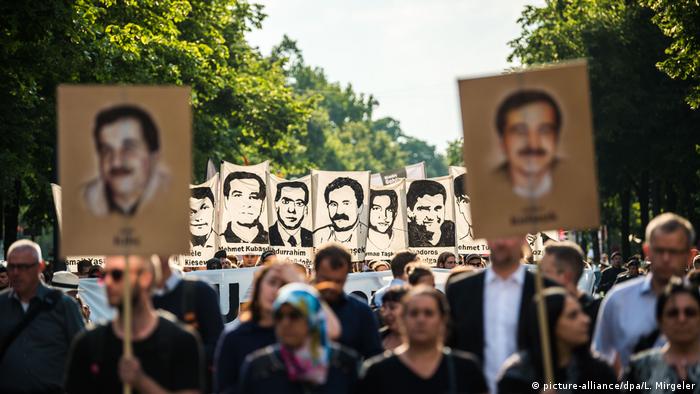 Protesters in Munich held up posters of the NSU's murder victims

All but one of the NSU's 10 murder victims had foreign heritage, and from the very first killings, state authorities, media and intelligence officials dismissed the possibility of racist motivations and attributed the killings to migrant drug rings.

State and federal authorities' failure to properly investigate the murders has led to numerous parliamentary inquiries.

Protestors on Wednesday also said the trial sentencing should not result in the end of the inquiries.

"Under no circumstance should the [NSU's] case file be declared closed and attention focused elsewhere," said Robin Steinbrügge, a victims rights' activist in Hamburg, where 1,000 people gathered on the streets.

The NSU's 2001 murder of Süleyman Tasköprü took place in the northern port city.

Protests also took place in numerous other German cities: Around 600 people gathered in Kiel, 300 in Bremen, 700 in Frankfurt and 200 in Rostock. 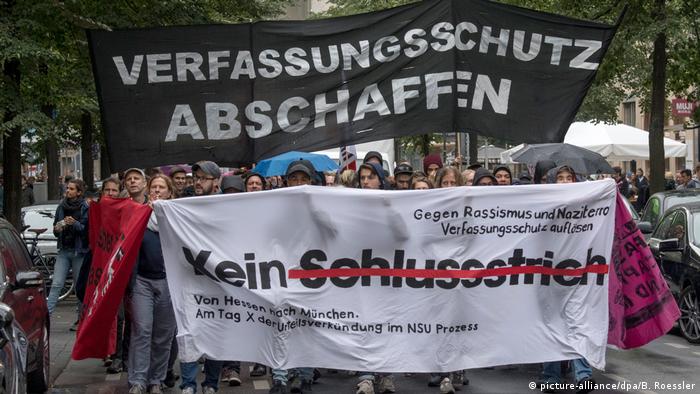 In Frankfurt, protesters criticized the state for protecting individuals as part of the investigation

Representatives from religious organizations in Germany also weighed in on Wednesday's verdict.

The NSU trial must not be seen as having successfully ended Germany's fight against right-wing extremist terror, Josef Schuster, president of the Central Council of Jews in Germany, said.

The Central Council of Muslims said that the 5-year-long court case did not adequately clarify who was involved in the murders and to what extent.

"This failure is a great burden for the victims' relatives and social peace in Germany," it said.

One of the highest-profile neo-Nazi trials of recent years is slowly drawing to a close. DW gives you the background to an affair that has shaken Germany. (27.04.2018)