For the European Union, the year was marked by division, euroskepticism and self-doubt. But the ongoing confrontation with Russia could once again bring unity. 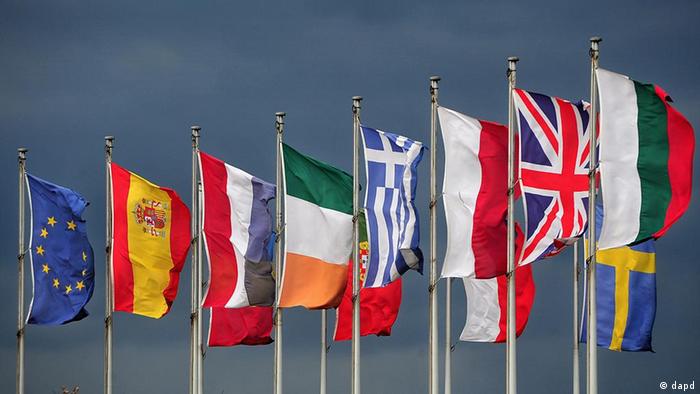 It was a foreseeable political disaster: discontent had long been seething, and in May it showed its force in the elections for the European Parliament. Almost everywhere, euroskeptic parties, right-wing populists and even parties openly hostile toward the European Union celebrated strong showings. In France, Britain and Denmark, they even won the election.

Their platform: Less Europe, more nation states. France's Front National wants to exit the euro currency union and reintroduce the franc, while Britain's UK Independence Party (UKIP) would like the country to exit the EU altogether. What they all have in common is a demand for less immigration. If these parties had their say, they would even limit free movement within the EU. 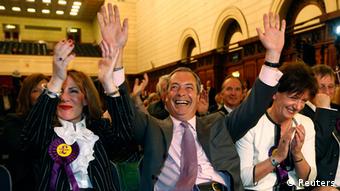 Britain's UKIP was overjoyed at the election results

Mouthpiece for the disillusioned

The euroskeptics may often have a hard time agreeing on a common stance, and setting up a major far-right EU parliamentary group may have been difficult as well - but they clearly have a part in shaping the agenda.

In 2014, migration was an issue that split the EU more than ever before. Human rights groups and even Pope Francis urged Europeans to take in more refugees from the regions torn by civil war in the Middle East and North Africa.

However, the predominant feeling was that "the boat is full" - and far-right populists fanned those flames. They have become the mouthpiece for citizens who see the EU as a detached bunch of bureaucrats who supposedly don't care about the worries of regular EU citizens.

The euro crisis was a "central factor, at least a catalyst for the feeling that the EU is either too far away or gets too involved," said Janis Emmanouilidis, an analyst at the Brussels-based European Policy Centre.

Nowhere in the EU was the discontent as palpable as in Britain, where Prime Minister David Cameron is being pushed around by UKIP. Cameron has warned that he can't guarantee that his fellow countrymen will choose to remain in the EU unless the bloc launches reforms and increases jurisdiction for individual member states.

In fact, a British exit has now become conceivable - even though the United Kingdom itself only narrowly escaped its own breakup just a few months ago when 55 percent of Scottish voters rejected independence. At least the result was clear enough to somewhat dampen hopes of European separatists in Catalonia and South Tyrol. 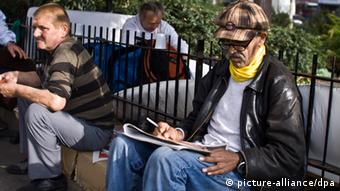 The economic crisis, with its high unemployment rates in many countries, has not only buoyed fringe parties. How to fight the crisis is still a question that continues to divide Europe.

While Greece, Ireland, Portugal and Spain are no longer are at the center of attention as these countries slowly begin to recover, Italy and most of all France can't seem to avoid negative headlines. Should the European Commission stay tough and demand more austerity from France, or should it give France more time to consolidate in order to prevent political extremism in the shape of the Front National? That was and remains an oft-debated question in Brussels.

France's capabilities for structural reforms are rather weak, said Emmanouilidis, though he added that it's not likely that the country will recover any time soon. France is also "fraught with question marks" of a political nature due to the strength of the far right.

As Ukraine and separatist rebels prepare for new talks, the US has imposed more sanctions against Russian-controlled Crimea. President Obama has prohibited American exports of goods or services to the annexed area. (20.12.2014)

German Foreign Minister Frank-Walter Steinmeier has expressed concern that EU sanctions against Moscow over Ukraine could further destabilize Russia. The minister warned against "turning the screw" any further. (19.12.2014)

EU leaders have gathered in Brussels for a summit in which they hope to agree a long-term strategy on Russia. The leaders were also expected to back an investment plan aimed at spurring growth in the 28-member bloc. (18.12.2014)

Twenty-seven candidates, 45 questions each. Their answers are intentionally left open ended and as vague as possible. For EU Commission hopefuls, the most important thing is not to wobble. (03.10.2014)

European Union leaders have welcomed Scotland's rejection of a referendum on independence from the United Kingdom. The decision has eased fears of growing separatist sentiment in the bloc. (19.09.2014)

The European Commission's new president, Jean-Claude Juncker, has survived a no confidence vote in Strasbourg. It comes as the latest political storm in Juncker's term, which began earlier this month. (27.11.2014)

The European Commission's new president, Jean-Claude Juncker, defended his record as prime minister of Luxembourg, amid mounting calls for his resignation over a brewing tax evasion scandal. (12.11.2014)

The French problem has yet another facet. Former French Finance Minister Pierre Moscovici is the new EU commissioner for economic and financial affairs - and is responsible for insisting on the country's compliance with the bloc's stability criteria.

When Commission President Jean-Claude Juncker appointed Moscovici in September, many said it was like trusting the fox to guard the hen house.

And he wasn't the only one: there was keen displeasure over allegedly lacking qualifications, experience or possible conflicts of interest with other commissioners, as well. But after a minor reshuffle, the EU Parliament eventually confirmed Juncker's new Commission - only for Juncker himself to come under scrutiny in November when details on tax deals emerged that showed major international firms had saved millions while based in Luxembourg when Juncker was the country's prime minister.

Cracks in the old order

The crisis that overshadowed everything else in Europe this year, however, was the confrontation with Russia.

In March, Russia annexed Ukraine's Crimean Peninsula and began destabilizing Eastern Ukraine, a campaign that continues to this day. Several EU states that once belonged to the Soviet Union, including the Baltic countries and Poland, now fear that they, too, may fall victim to Russian aggression.

Over the course of the year, the EU imposed increasingly harsh sanctions on Russia - but the conflict is anything but solved. As 2014 comes to a close, a return to the former partnership with Russia seems to be more distant than ever. The peaceful European order that has lasted since the end of the Cold War has cracked, and no one knows what's next. 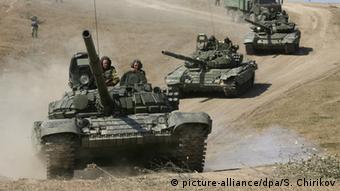 Russian tanks are once again a threat in Europe

At least this bitter experience has taught the Europeans the importance of solidarity. In the dispute with Russia, the EU has presented a unified front like it rarely has before, proof that the 28 EU member states, with their varying positions and relationships with Moscow, were and continue to be able to agree on a common position, said Emmanouilidis.

The question remains, however, how long the Europeans can now hold out in the standoff with Russia. The crisis has restored the idea that Europe is "stronger united than alone," said Emmanouilidis. That truism seemed long-forgotten in the EU - but 2014 has brought it back to life.