EU leaders have gathered in Brussels for a summit in which they hope to agree a long-term strategy on Russia. The leaders were also expected to back an investment plan aimed at spurring growth in the 28-member bloc. 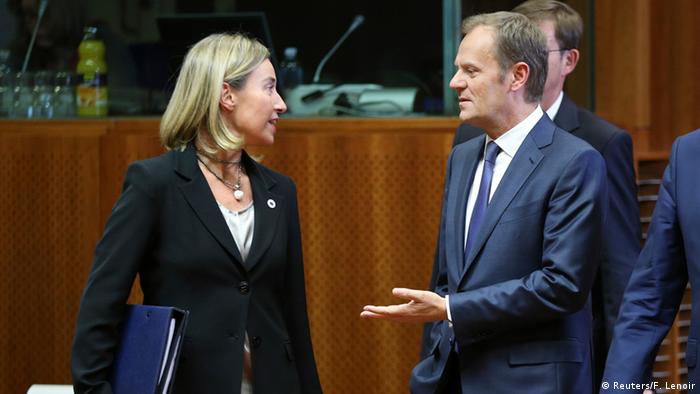 As he arrived at the summit venue on Thursday, the new European Council president, Donald Tusk (pictured above, right), said a long-term strategy to deal with Moscow was vital to maintaining stability on the EU's eastern borders.

"The situation is really dramatic and very dynamic and of course…. demands immediate reactions," said Tusk, hosting his first European Union summit since taking up the new post on December 1.

"We will not find a long-term solution for Ukraine without an adequate and consistent, both tough and responsible, strategy towards Russia," he said, referring to the military conflict between pro-Russia separatists and government forces in eastern Ukraine.

"Today we should send a strong signal on our readiness to further support Ukraine also financially as we have done politically," he added.

Tusk also noted that earlier in the day, the EU had tightened its economic sanctions on Russia, this time targeting the Crimean peninsula, which Russia annexed from Ukraine back in March. The latest sanctions essentially prevent EU-based companies from doing business with the disputed region.

"The annexation is illegal and what we are doing is part of the non-recognition policy," said European Commission spokesperson Maja Kocijancic.

Before departing for the summit, Chancellor Angela Merkel said that until the Kremlin accepted that Ukraine should be free and united, sanctions against Russia would be unavoidable.

"The goal of our actions is and will remain a sovereign and territorially intact Ukraine that can decide its own future," Merkel told the Bundestag lower house of parliament in Berlin.

Western leaders have repeatedly accused Putin of stoking the conflict in eastern Ukraine by supplying weapons and troops to the rebels.

Under the plan, which Juncker unveiled last month, a new fund managed by the European Investment Bank would be set up to finance infrastructure projects in areas such as information technology, energy, transport, education, research and innovation.

Absent from the summit will be the Dutch prime minister, Mark Rutte, who cancelled at the last minute due to a domestic political crisis threatening to bring down his coalition government.

In his year-end presentation to journalists in Moscow, the Russian President did not identify concrete measures for an economic recovery. He described sanctions as illegitimate. (18.12.2014)

West's sanctions on Russia bite, but backlash could hurt

As Vladimir Putins tries to gloss over his country's economic problems, ordinary Russians are starting to feel the double whammy of falling oil prices and sanctions. But has the West bitten off more than it can chew? (18.12.2014)

Poland's Donald Tusk has taken over as European Council president, charged with convening summits of the bloc's 28 leaders. The former Polish premier has promised "ruthless determination" to fix Europe's economy. (01.12.2014)