In his year-end presentation to journalists in Moscow, the Russian President did not identify concrete measures for an economic recovery. He described sanctions as illegitimate. 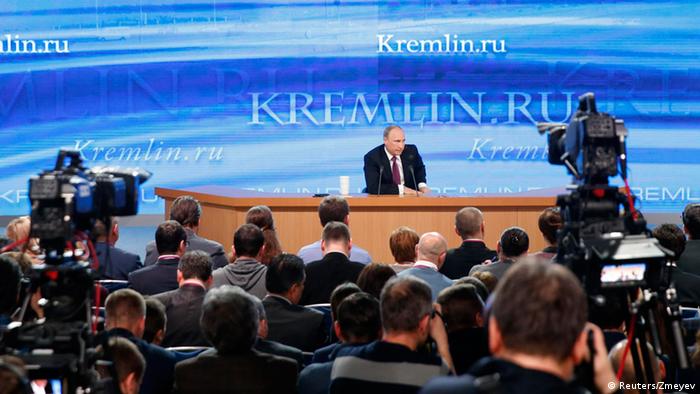 The Russian currency fell further against the US dollar following President Vladimir Putin's three hour, end-of-year news conference in front of a thousand journalists in Moscow. The conference on Thursday was shorter than the 2013 edition - which had lasted for four hours and forty minutes.

Putin promised to diversify Russia's economy and said it would recover within two years. But he provided no clear plan of how to tackle the crisis which has seen the rouble fall 45 percent against the US dollar this year.

In mid afternoon trade on Thursday, the rouble was some 1.3 percent weaker against the dollar at 61.00 after opening more than 1 percent higher. The rouble fell against the euro during Putin's appearance but was 0.1 percent stronger at 75.05 shortly after it finished.

The Russian currency has been hit by a drop in oil prices to a five year low, Western sanctions over Ukraine, and the central bank's inability to support the rouble despite two interest rate hikes in the past week: firstly to 10.5 percent and then to 17 percent. There were fears Russia would have to resort to capital controls.

Putin, however, said Russia did not plan to order domestic exporters to sell their foreign-currency earnings. He also said the central bank should not "burn through" foreign currency reserves to support the rouble.

Oil prices rose in Thursday trade with a barrel of Brent crude gaining more than 3 percent to over $63 (51 euros) a barrel.

An Associated Press-NORC Center for Public Affairs Research poll released Thursday found that about 80 percent of Russians still support Putin but showed that confidence in the economy was slipping.

Putin described sanctions against Russia as "illegitimate" and said that Saudi Arabia and the US "might" have conspired to lower oil prices to harm Russia. He said it was illogical to blame him for the current cold relations with the West.

He referred to the number of US military bases around the world and the US deployment of anti-ballistic missiles in Europe and, as a consequence, rejected the idea that Russia could be seen as the aggressor. He also compared NATO expansion to the Berlin wall.

The Russian president said he wanted a diplomatic solution to the crisis in Ukraine. He said the situation must be solved by political means in line with fundamental international principles, including the right of self-determination.

The Russian currency has plummeted dramatically in recent days. Now European carmakers have suspended deliveries to their showrooms in Russia while they consider price adjustments. (18.12.2014)