Germany's Angela Merkel has demanded a meeting on the Ukraine crisis. In a phone call with Ukraine's Poroshenko and Russia's Putin and French President Hollande, Merkel said a lasting peace treaty was needed. 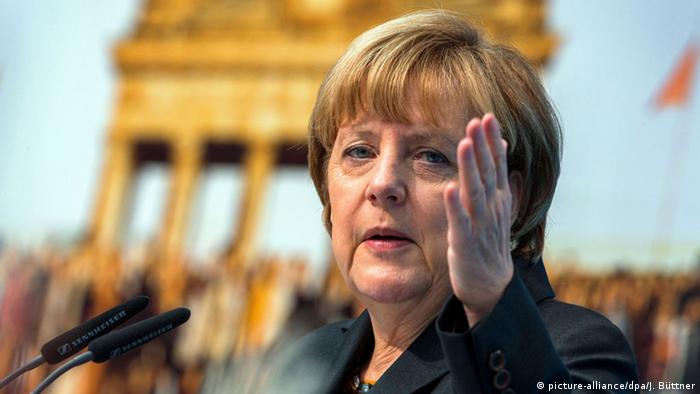 In a telephone conference on Tuesday evening with Russian President Vladimir Putin, Ukrainian President Petro Poroshenko and the French head of state, Francois Hollande, Merkel said a meeting of the Ukraine contact group countries was necessary to find a lasting solution to the Ukraine crisis.

In a statement released by the German government, the four leaders welcomed the latest truce in eastern Ukraine, now a week old, but they stressed the need for a comprehensive agreement.

Merkel and Hollande also emphasized that Russia and Ukraine needed to achieve these goals soon and that there wasn't much time to be lost anymore.

"The pre-requisites for progress in the implementation of this agreement is, according to common perception, a speedy meeting of the contact group consisting of Russia, the Ukraine as well as the Organization for Security and Cooperation in Europe, which has been repeatedly calling for talks," said the official statement released by Merkel's office.

Putin, Merkel, Hollande and Poroshenko also agreed that humanitarian assistance needed to be boosted for the crisis areas. Until now, Russia had been sending convoys of trucks which it officially declared as humanitarian aid for the affected areas.

Ukrainian Prime Minister Arseniy Yatsenyuk has urged NATO to do more to help his country's military as it struggles to quell a pro-Russian insurgency. He also appealed to the European Union for urgent financial help. (16.12.2014)

Doubts over peace talks on Ukraine's 'Day of Silence'

As Ukraine begins a "Day of Silence" in a bid to rejuvenate the failing truce with pro-Russian separatists, plans for new peace talks remain uncertain. Neither side has confirmed attendance in Minsk, Belarus. (09.12.2014)