Ukrainian Prime Minister Arseniy Yatsenyuk has urged NATO to do more to help his country's military as it struggles to quell a pro-Russian insurgency. He also appealed to the European Union for urgent financial help. 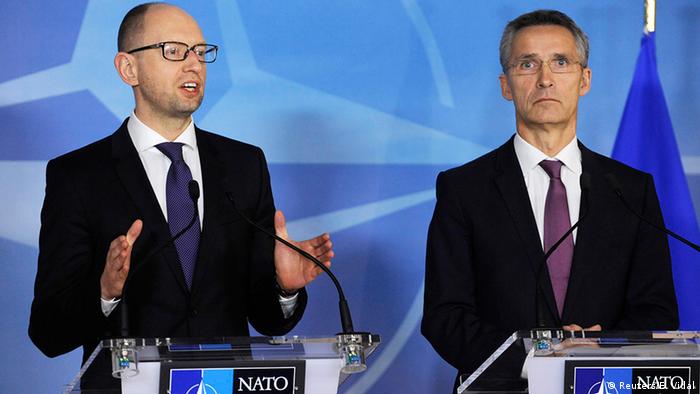 The Ukrainian premier said on Monday that, while visiting NATO headquarters in Brussels, he had asked the alliance for help in shaping a new defense and security strategy for his country.

"It's difficult for us to fight with a nuclear state that is armed to the teeth," Arseniy Yatsenyuk said, accusing Russia of seeking to eradicate an independent Ukraine.

Yatsenyuk said he had asked the alliance's Secretary General Jens Stoltenberg "to improve the stance of the Ukrainian military and the National Guard."

Beyond that, the Ukrainian leader gave no further specifics, while Stoltenberg did not comment on NATO's response to the request.

Moscow unilaterally annexed the Crimea peninsula - which was until then ruled from Kyiv - in March this year. In the intervening period, Ukrainian forces have been combating a pro-Moscow rebellion in the eastern provinces of Donetsk and Luhansk.

NATO and Western governments claim the insurgency is managed, supplied and staffed by the Kremlin. Yatsenyuk claims that Russian aggression has caused Ukraine to lose some 20 percent of its economic output. The country has also had to dramatically increase military spending.

Yatsenyuk - whose new government was approved by parliament earlier this month - also appealed to the European Union for urgent financial aid on Monday, saying the government needed help to fix its shattered economy.

A year of revolution and war with the separatists has brought Ukraine's hryvnia currency to record lows and crippled the economy. Even before, the country had been perilously near to bankruptcy after years of corruption and economic mismanagement.

Asked when Ukraine needed the money, Yatsenyuk told reporters in Brussels: "Let me put it in a nutshell - yesterday."

The EU, which last year offered a $15-billion (12-billion euro) package of loans and grants to Ukraine, is demanding radical economic reforms in return. Brussels has refused to organize a donors' conference until Kyiv produces a detailed set of plans for the country's economic development.