Ukraine has reported a drop in rebel attacks during the second day of a new truce dubbed the "Day of Silence." It remains unclear, however, whether hoped-for peace talks will go ahead. 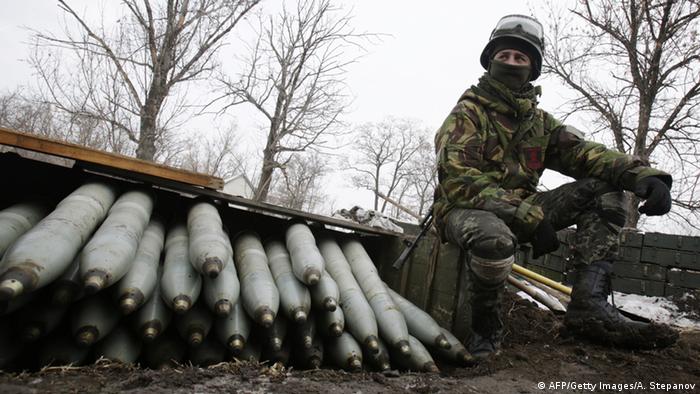 A truce between Ukraine and pro-Russian separatists appeared to be holding on Wednesday, with the Ukrainian military reporting a major drop in the amount of attacks by rebels, during Tuesday's so-called "Day of Silence."

The temporary ceasefire was the brainchild of Ukrainian President Petro Poroshenko, in an attempt to revive a failed a peace bid made back in September.

However, whether hoped-for peace talks would go ahead in the Belarusian capital of Minsk remained unclear.

A total ceasefire in the east of Ukraine, where particularly intense fighting has taken place and several "peoples republics" have been declared by Russian insurgents, was anticipated to have led to a new round of talks this week.

But reports of sporadic violence on Tuesday were enough for Ukraine's military to decide to delay withdrawing its heavy weaponry from the eastern border, and create a 30-kilometer buffer zone.

Despite this, spokesman for the Ukrainian military, Andriy Lysenko, said at a news conference that the break in fighting was an encouraging sign for relations with Moscow.

"To the extent that we are seeing a lessening of shelling, we will continue supporting the silence regime and hope that shelling will reduce sharply and lead to zero," he said.

But, he warned, the army would not consider pulling out its heavy weaponry until the violence had stopped completely.

"Once there has been a day without a single shot, it will signal we can start the process of withdrawing heavy weapons," he told news agency AFP.

Subsequent plans to hold talks via video-link between the "contact group" of Ukrainian, Russian and European observers and separatist leaders this week were also called off.

In September, a 12-point peace plan was drawn up, during talks held by the Organization for Security and Cooperation in Europe (OSCE).

But this arrangement was soon scuttled, with both sides ignoring the agreed-upon truce to end the fighting.

Meanwhile, there are signs Russia might be tiring of keeping up its push into Ukraine, which, according to figures released by the United Nations, has so far claimed at least 4,300 lives.

On Wednesday, Russian General Valeriy Gerasimov, said the Ukrainian government had invited his forces into Donetsk to "find compromise solutions to de-escalate tension and withdraw troops from lines of contact."

Russia continues to deny supporting the rebels, but both Kyiv and other Western governments have supplied overwhelming proof.

This has lead to Russia's diplomatic isolation from the international community, with several countries imposing sanctions on goods from the country.

On a global scale, a UN report released on Wednesday says the Ukraine crisis is having "major regional macroeconomic repercussions," largely due to global sanctions targeting Russian exports.

And Kyiv has called on the International Monetary Fund (IMF) to expand its $17 billion bailout package, saying Ukraine's economy has worsened since the package was first announced in April.

The former Soviet state has long battled with an economy plagued by corruption and economic mismanagement, and the cost of fighting pro-Kremlin rebels is taking an added toll.

In September, the IMF warned the nation may need as much as $19 billion in aid if the conflict continued into 2015.

Ukraine has so far received around $4.6 billion in assistance.