Russia's economic crisis could last up to two years, President Vladimir Putin has warned during an annual press conference. The country is struggling under Western sanctions, low oil prices and a falling ruble. 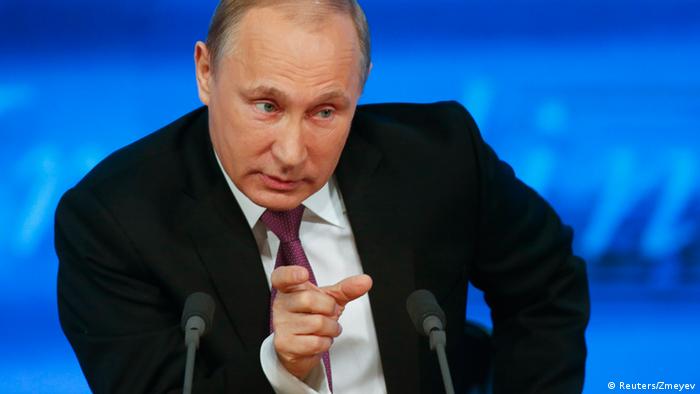 Russian President Vladimir Putin promised his country's economic woes would not last forever, during an end-of-the year conference on Thursday in front of more than a 1,000 journalists in Moscow.

Russia is facing the worst financial crisis since Putin entered the president's office in 2000. He sought to calm fears of economic collapse, saying an upward turn was "inevitable."

"Under the most unfavorable world conditions, such a situation can last two years," Putin said.

Putin said there no plans to fix the ruble rate, nor to use foreign reserves to prop up the Russian currency, which has fallen about 45 percent against the US dollar this year.

The past week has seen a dramatic drop in the value of the ruble, reaching historic lows of 80 rubles to the dollar and 100 to the euro.

He said the current drop in oil prices was troubling, but would encourage Russia to reduce its dependence on oil and gas exports and diversify its economy. Putin also promised to support the poorest among Russia's population.

"Clearly the current situation is caused mainly by external factors," Putin said. However, the president said he believed that Western sanctions play a relatively minor role in Russia's economic crisis, saying that "25 per cent, 30 per cent maybe is because of sanctions."

The conference is being closely followed by the international media over the ruble's plummet as well as the conflict in Ukraine.

Putin said Ukraine's attempt to stop a separatist uprising in the country's east was a "punitive operation," and that Russia was fighting for its right to exist.

"It is indeed a punitive operation. But it is being conducted by the current Kiev authorities," he said.

Western nations have repeatedly accused Russia of involvement in the Ukraine crisis, by supplying weapons and troops to the separatist rebels. Russia denies these claims. The conflict has killed at least 4,700 people.

The Russian Central Bank responded resolutely to the panic selling of the ruble. But a base rate of 17 percent won't help much unless there is a drastic change in Kremlin policy, says Andrey Gurkov. (17.12.2014)