German Foreign Minister Frank-Walter Steinmeier has expressed concern that EU sanctions against Moscow over Ukraine could further destabilize Russia. The minister warned against "turning the screw" any further. 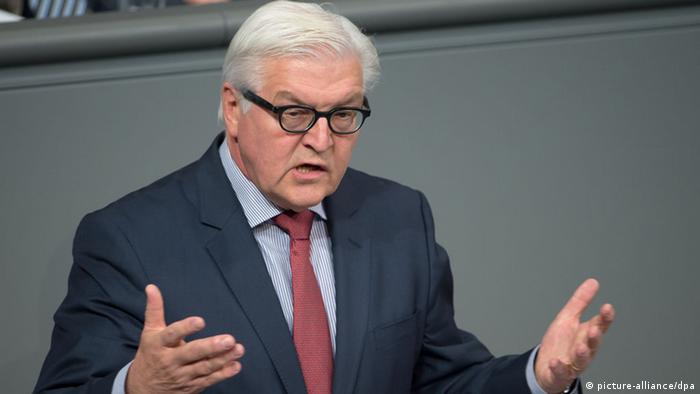 Steinmeier's comments to German weekly Der Spiegel on Friday suggested a possible softening in his stance on the issue of sanctions.

Steinmeier, a member of the junior coalition partner Social Democrats (SPD), noted that the plummeting of the ruble currency and sliding energy prices had created an economic and financial crisis in Russia. The minister, whose party has traditionally favored detente with Moscow, warned that it should not be allowed to get out of hand.

"It cannot be in our interests that this runs out of control," he said. "We need to keep this in mind in our sanctions policy."

Steinmeier, who has acted as one of the main mediators in the Ukraine crisis, on Friday flew to Kyiv for meetings with Ukraine's President Petro Poroshenko and Prime Minister Arseny Yatsenyuk. He had urged parties in peace talks to attend a fresh round of discussions in the Belarusian capital Minsk on Sunday, but without success.

EU leaders who met in Brussels on Thursday warned Moscow they were ready to "stay the course" in a long confrontation, should Russian President Vladimir Putin refuse to pull back from Ukraine. However, having enacted some previously agreed new sanctions, they made no move to further escalate measures against Moscow.