Calls for AfD lawmaker accused of Russia ties to resign | Germany | News and in-depth reporting from Berlin and beyond | DW | 08.04.2019

Calls for AfD lawmaker accused of Russia ties to resign

German lawmakers have condemned Markus Frohnmaier amid reports that he was under the influence of the Kremlin. However, the scandal may not be enough to stop the nationalist party from making gains in state elections. 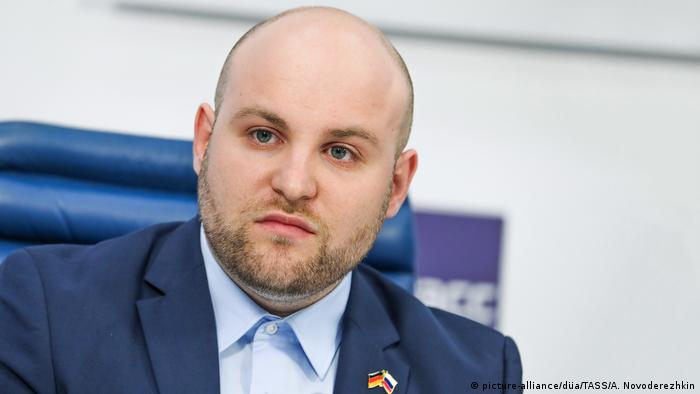 "Whoever makes himself so dependent on other powers cannot independently act in the interests of the German people in parliament," CDU General Secretary Paul Ziemiak said on Monday, following a meeting of his party's executive committee in Berlin. "Does one want such a person within his own ranks?" 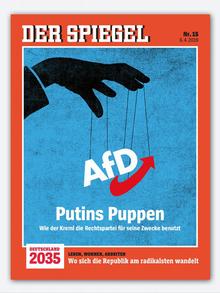 Russia would have "its own absolutely controlled MP in the Bundestag," one document detailed. Another said financial assistance to Frohnmaier's campaign would mean a push for "good relations with the Russian Federation: sanctions, EU interference in Russian domestic politics."

The 28-year-old politician has been one of the far-right party's rising stars since its founding in 2013. Before representing the AfD in parliament, Frohnmaier was press speaker for current party leader Alice Weidel, as well as former party leader Frauke Petry. Until February 2018, he was federal chairman of the AfD-affiliated organization "Junge Alternative" (Young Alternative), which German intelligence authorities suspect of extremist activities.

Frohnmaier vehemently denies the accusations against him. "I came here to represent German interests and that's what I'm doing," he told ZDF. "Anyone who looks at my proposals and initiatives can back that up."

However, in 2015, he reportedly traveled to Saint Petersburg to meet with controversial Russian political analyst Aleksandr Dugin, who advocates for modern forms of fascism and retains close ties to President Putin. Frohnmaier also took a trip to the annexed Crimean peninsula in April 2016 that was paid for by a Russian foundation.

'Lay all the facts on the table'

The accusations against Frohnmaier drew quick reactions from across the German political spectrum.

Merkel spokesman Stefan Siebert told DW on Monday that the government was aware of the accusations against Frohnmaier, but that an investigation into the legitimacy of claims that the Kremlin bolstered his 2017 election bid is ultimately a task for the Bundestag.

"The Bundestag has clear rules in such cases where there are assumptions, suspicions or accusations [of foreign interference]," he said.

Thomas Oppermann, the center-left Social Democratic lawmaker and vice president of the Bundestag, told Germany's Bild am Sonntag that the Parliamentary Advisory Committee would clear up whether Frohnmaier is acting as a "gateway" for foreign actors to influence the body's duties.

The AfD is now "massively obligated to lay all the facts on the table," said the Green Party's Britta Hasselmann. Meanwhile, AfD party leader Jörg Meuthen dismissed the allegations as "nonsense, a huge humbug." 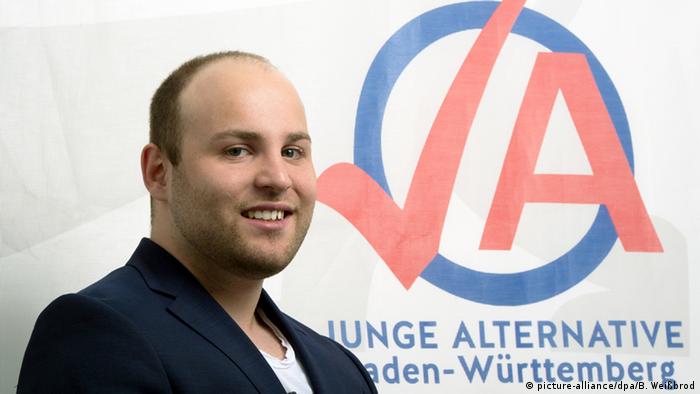 Frohnmaier was previously chairman of the AfD-affiliated organization 'Junge Alternative'

The AfD is no stranger to controversy, and the latest accusations against Frohnmaier — together with the AfD's relationship to other far-right, populist parties in Europe with close ties to Russia — are fairly damning, Florian Hartleb, a political analyst specializing in right-wing political movements in Europe, told DW.

Even so, it's hard to predict just how such a development will affect the AfD. The party is still polling at or around 20 percent in the three eastern German states set to elect new governments this autumn — despite being mired in campaign finance scandals and investigations into the party's suspected extremist ties over the past months. Citizens in the formerly communist East German states still hold an affinity for Russia almost 30 years after German reunification.

At the same time, other German politicians accused of questionable ties to foreign governments have evaded stark recourse. In 2015, CDU parliamentarian Karin Strenz reportedly accepted at least €15,000 ($16,895) from an Azeri lobby. She then went on to vote against a European Council resolution demanding the release of political prisoners in Azerbaijan, drawing corruption allegations.

Strenz still retains her seat in the Bundestag, though she was forced earlier this year to pay a €20,000 fine — not for corrupt behavior, but rather for having reported extra income later than the Bundestag's rules allow.

"It's problematic to think that there are representatives in the Bundestag who represent foreign interests," Hartleb said of Frohnmaier and others. "The government should definitely take such actions seriously … but it's difficult to say if voters will."

The friendly faces of the AfD? Germany's new parliamentary representatives

After the 2017 election, the far-right populist party enters the Bundestag for the first time. But who exactly are some of the Alternative for Germany's representatives — and what have they said and done? (25.09.2017)