This is the third German-language YouTube channel run by RT to be blocked. The decision could further strain tensions between Germany and Russia. 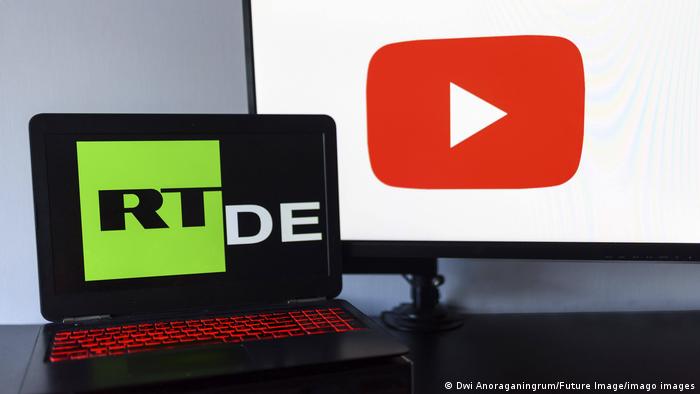 RT complained that YouTube had removed its newly launched "Auf Sendung" (On Air) channel "without explanation."

The takedown comes after YouTube blocked RT's two other German channels — RT DE and Der Fehlende Part — initially for violating COVID-19 misinformation policies and then trying to skirt that ban.

The internet streaming site said the latest block was once again due to attempts to skirt its first ban.

"When a channel is terminated, the uploader is not allowed to use, own or create any other YouTube channels," a YouTube spokesperson told news agencies. "As a result of this circumvention attempt, the new channel 'RT auf Sendung' was permanently removed for violating YouTube's terms of service."

The previous shutdown escalated into a minor diplomatic incident, with the Kremlin calling it "censorship" and accusing Berlin of being behind the decision.

Berlin denied that claim, saying it had "nothing to do with" YouTube's decision. YouTube is owned by US internet giant Google.

Relations between Moscow and Berlin are particularly strained right now, with fears of a Russian invasion of Ukraine, and Russia-backed Belarus pushing migrants into Poland — a fellow member of the European Union. Russia is also angered by Wednesday's finding of a Berlin court that the Russian government ordered an assassination in the German capital.

German Chancellor Olaf Scholz issued a warning on Wednesday during his inaugural address to parliament that Russia would pay "a high price" if it invaded Ukraine.

RT — formerly known as Russia Today — is a state-funded broadcaster with television channels and websites in several languages. It has recently faced headwinds in Western countries, including being forced to register as a "foreign agent" in the UK.

RT still has plans to expand in Germany, but it currently lacks a broadcasting license. It had attempted to launch via Luxembourg, but this attempt failed.

It is banned in several countries.

The German channel blocked by YouTube is still available on other platforms, including on the RT DE website.

The Kremlin has threatened to block YouTube in Russia, calling for "zero tolerance" towards the video hosting giant.