The United Nations is calling for more donations to help the desperate population of Yemen at a special conference in Geneva. However, lack of funds isn't the only difficulty faced by aid workers in the country. 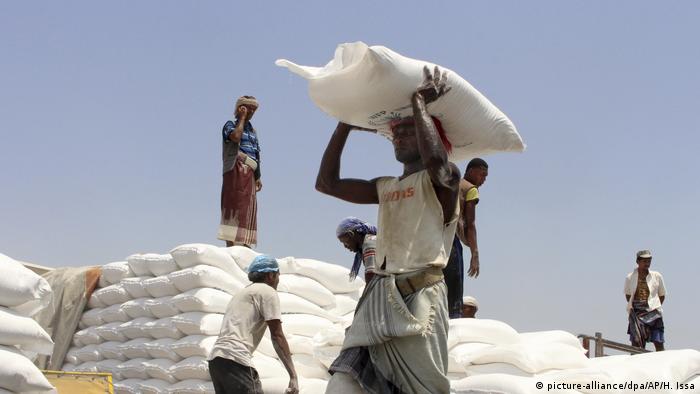 Yemen needs help. Urgently. This is the core message of a joint statement released by a group of international aid organizations in advance of the United Nations donor conference in Geneva. They have called for financial and political support to resolve what they describe as "the worst humanitarian crisis of our time," warning that around 24 million people in Yemen are dependent on aid. That's roughly 80 percent of the population. Despite international provisions, food shortages are increasingly widespread.

After four years of the Saudi Arabian-led military coalition waging war in Yemen, the situation in the country is catastrophic. A study by the German aid organization Welthungerhilfe found that much of the country's infrastructure has been destroyed. The health system has also suffered: The same report says 14 million people have no access to primary health care.

An increasing number of people — almost 13 million — also have no secure access to water and sanitation, which means there is a growing risk of the spread of disease. Around 1 million people in the country were believed to be infected with cholera at the end of 2017.

Hunger further aggravates the crisis. The UN estimates that around 20 million people will no longer be able to feed themselves this year without access to emergency food supplies. Some 14 million of them need immediate support. Children are particularly badly affected: Two million Yemeni boys and girls are already undernourished.

The donor conference in Geneva is the third of its kind. Several billion euros were pledged in previous conferences in 2017 and 2018, but millions of people in Yemen are still suffering.

Simone Pott, who heads the communications team at Welthungerhilfe, says there are many difficult aspects to supplying aid to Yemen. For years now, the charity has provided aid on the ground in collaboration with its French partner organization, ACTED. The aid takes the form of cash donations and food vouchers. Many working people in Yemen have not been paid for years and the aid money means they can at least obtain essentials. At the same time, said Pott, the funds also help support what's left of the country's economy.

Pott told DW that international aid was falling short in that aid organizations had insufficient funds at their disposal. The money collected in 2018, for example, was not only far less than the amount needed, it was also far less than the amount pledged. "Back then, we explained that we needed around $2.6 billion (€2.3 billion), but we collected only a little more than 80 percent of that," said Pott. This also results in planning difficulties, she added, "because even if aid is pledged, it's not clear when the money will actually be transferred."

Bottleneck at the ports

Another difficulty is getting the aid into Yemen. "It all comes in through just a few ports," Pott explained. "But these ports are fiercely contested, which means the facilities often aren't operational. Consequently, much of the aid doesn't even make it into the country."

Even once the aid has been landed, she said, the difficulties continue. For example, it's impossible to go to areas where there is fighting. But the real problem, Pott noted, is that the country is divided up into different spheres of influence: "Who is in charge where? How many checkpoints are there on the road? Who gives permission for a convoy to go from A to B, and what papers are needed? We're always having to deal with problems like this."

The aid workers often have to obtain specific papers, or produce a missing stamp. And there are other problems, too. "Sometimes it's simply not possible to gain access to an area, either because the roads are impassable or because there are no security guarantees for aid transports," said Pott.

Cooperating with those in power on the ground isn't easy, either, Pott explained, because local authorities often want to make a personal profit from the aid deliveries.

"This is a problem that occurs in almost every country where there's tremendous need," she said. "High taxes are often imposed on aid supplies. Humanitarian aid workers pay high taxes. Or governments will massively raise the cost of visas. There are no more problems in Yemen in this respect than there are in other countries."

In Pott's view, a political solution is the prerequisite for overcoming the humanitarian crisis. Without this, she said, there will be no long-term, stable improvement in the situation in Yemen.