US President Joe Biden has reversed another heavily criticized policy from the Trump administration and the decision has been praised as helping to relieve the humanitarian crisis in Yemen. 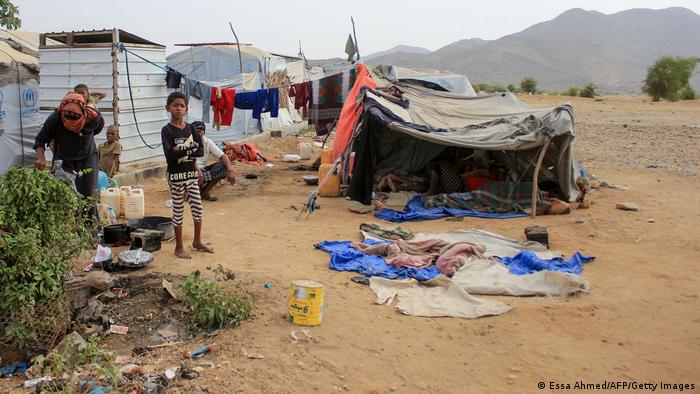 Yemen has been battered by years of war, economic crises and the coronavirus pandemic

US President Joe Biden's administration said on Friday that it was planning to remove Yemen's Houthi rebel group from the terrorist blacklist.

The decision is the most recent in a series of policy reversals  from the Trump era and comes less than three weeks after the designation was ordered.

"Our action is due entirely to the humanitarian consequences of this last-minute designation from the prior administration, which the United Nations and humanitarian organizations have since made clear would accelerate the world's worst humanitarian crisis," a State Department official said.

The Trump administration was slammed for its decision to place the Houthis on the terrorist blacklist amid fears it would worsen the already desperate situation in the war-torn country.

What role is the US playing in the Yemen conflict?

The move came a day after the president's announcement that the US was halting support for the military campaign led by Saudi Arabia in Yemen against the Houthi rebels — generally understood to be a proxy war between the Sunni Gulf country and its Shia rival Iran.

Former Secretary of State Mike Pompeo declared the Houthis a terrorist organization on January 19, a day before Biden's inauguration. Although the ruling had included some exemptions for aid groups, UN officials and other groups said they were not enough and called for it to be revoked.

The UN has been attempting to bring the two sides back to the negotiating table.

Saudi Arabia entered the conflict in 2015 to support government forces facing off against the Iranian-backed Houthis. Approval for the intervention was first given by the Obama administration after the Houthis took over large parts of the country.

Yemen has also been hit by a disastrous economic crisis as well as the coronavirus pandemic. The UN has described the situation as the world's biggest humanitarian crisis, with 80% of the country's population in need of aid.

How was the decision received?

The revoking of the terrorism designation, while not unexpected, was widely welcomed.

"We welcome the stated intention by the US administration to revoke the designation as it will provide profound relief to millions of Yemenis who rely on humanitarian assistance and commercial imports to meet their basic survival needs," UN spokesman Stephane Dujarric said.

Democrat Senator Chris Murphy also welcomed the decision saying: "The designation did not impact the Houthis in any practical way, but it stopped food and other critical aid from being delivered inside Yemen and would have prevented effective political negotiation."

The State Department emphasized that the removal from the blacklist was not a sign that the US condoned the Houthis and their "reprehensible conduct."