Yazidi women seek acceptance for children born of IS rape | Middle East | News and analysis of events in the Arab world | DW | 30.04.2019

Yazidi religious authorities have walked back on a decision suggesting that they would accept the children of women raped by Islamic State group captors. Though the children are innocent, to many they represent genocide. 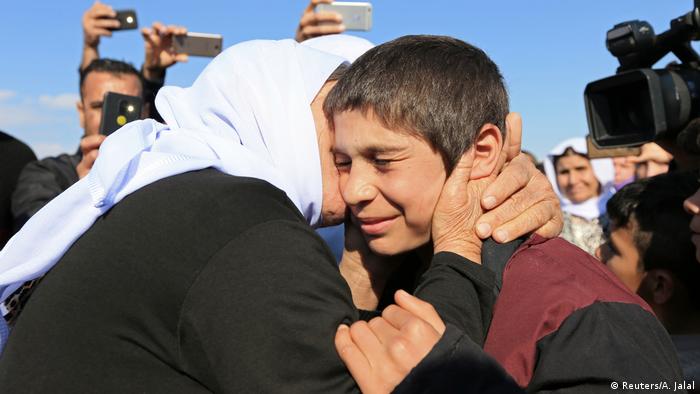 Last week, the Yazidi Supreme Spiritual Council overturned a decision stating that "all" survivors of Islamic State group crimes would be taken in, prompting a debate over how the children of women raped by IS militants might be reintegrated into the minority sect's society in northern Iraq.

After faith leaders on the council previously evaded sensitive specifics in their first statement, they clarified that it "did not mean the children born as a result of rape, but those who were born from Yazidi parents and were kidnapped during the invasion."

Yazidi survivor and Nobel laureate Nadia Murad responded to the decision in a video statement Sunday, saying "the first and last decision belongs to the survivors and their families and no one has the right to make decisions that belong to them."

"If they decide to return with their children, we as a society must respect their decision, welcome them and offer them any possible help," Murad said.

Up to 200 of the 3,500 Yazidi women who returned home after the 2014 onslaught by IS escaped with children, according to Zeynep Kaya, a research fellow at the London School of Economics Middle East Centre.

Resistance to the council's original statement accepting all survivors arose as the community continued to grapple with the trauma of the 2014 genocide, its implications for a Yazidi identity under threat, and stigma around sexual assault that has shamed and silenced survivors.

The community has traditionally not recognized marriage and conception between Yazidis and non-Yazidis, or accepted religious conversion. Community groups say the restrictions help the small group protect the integrity of its identity and maintain survival in the face of genocide.

Yazidi activist and former Iraqi parliamentarian Amina Said agreed that the families should be the ones to decide the fate of the children. "As a mother, I feel what the women are feeling," she told DW. "I can understand the community reaction because I also live in the community … but they are victims. If we close all the doors for them they will be punished twice."

Said believes the Spiritual Council made positive steps in 2015, when they allowed returning women who had been forced to convert to Islam to be rebaptized in a new ceremony, but said that they had made the wrong move this time by not consulting the community.

"If they took the time to talk with the families, with the women and with some NGOs, then I think they could find a way for the women," she said.

Stigma, genocide and the law

Some Yazidis have argued that relocation was the only way for children and the community to avoid stigma, and that protecting an already fragile community, above the interests of individual children and mothers, should be the priority.

According to Ahmed Burjus, deputy director of the Yazidi support group Yazda, one of the most painful aspects for the community has been coming to terms with children whose fathers had wrought genocide on a community that once numbered 500,000 people. Burjus said one man told him he hoped his wife would return "but not with the son of someone from Chechnya, Turkey or Saudi Arabia. You know that this person was responsible for genocide, looting all your belongings, destroying your house and killing your family. Now you are forced to bring the son or daughter of one of them to your house."

Some community members, according Burjus, also feared the children would be singled out for revenge by others who had suffered under IS, be subjected to stigma for life and would have difficulty registering as Yazidi under Iraqi law because their father was unknown but presumed Muslim.

Iraq's controversial national identity card law dictates a child should be registered as Muslim if either of the parents is Muslim, adding legal issues on top of Yazidi religious doctrine.

Although draft legislation currently before Iraqi parliament seeks to redress some aspects of Yazidi suffering, including the rights of female survivors, it does not contain exemptions for children born of rape.

"So we believe these women and children need to be respected and helped," Burjus told DW. "And the best way to do that is to resettle them outside Iraq in another country and provide them a life with dignity."

Read more: A Yazidi mother's torment in Iraq, 4 years after the genocide

Many Yazidi women who survived have already left for Germany, Europe and Australia, further fragmenting the fragile Yazidi identity, but other mothers abducted by IS have found a way to quietly reintegrate into their former communities.

Some hid their pregnancies and gave their babies to family members, others claimed to have met Yazidi husbands while imprisoned, according to Zeynep Kaya. However, most women "will probably just give up their children and babies and go back to their community; or just leave the country," she said.

"It's very hard for these women because they are basically kept in limbo," Kaya added. "They want to go back to their communities but they have to give up their children. It's another level of rejection and exclusion basically, on top of what they have already suffered."

Historically Iraq's Yazidi community was isolated, under-resourced and very conservative. Seven years after the "Islamic State" tragedy, the community is more open to the world — and Yazidi women are benefiting.