The past she was attempting to flee came back to haunt a young Yazidi woman in a small town in Germany. Her former IS tormentor confronted her on the street and "told me he knew everything about me." 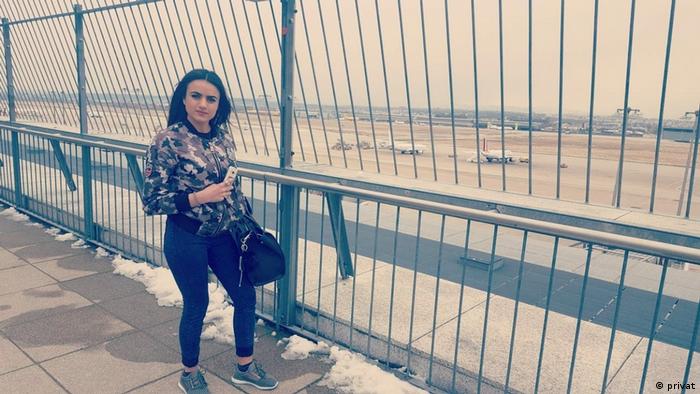 A 19-year-old Yazidi woman has fled Germany with her family after encountering the "Islamic State" (IS) fighter who had enslaved her in Mosul on the streets of Schwäbisch Gmünd, a town in Baden-Württemberg.

Ashwaq Haji Hamid arrived in the southwestern state with her family in 2015 through a program aimed at assisting Yazidi women who had been subjected to violence by IS.

In 2014, IS committed what the UN concluded was a genocide of Yazidis in northern Iraq. The militant group also abducted scores of women and children, including Hamid, who were sold into slavery.

But while attempting to leave her past behind, she was confronted by her tormenter, who had kept her as a slave for 10 weeks.

"I ran away from Iraq so I would not see that ugly face and forget anything that reminds me of it, but I was shocked to see him in Germany," Ashwaq Haji Hamid told InfoMigrants, a news site about migration run by DW, France Medias Monde and Italy's ANSA agency.

"The first time was in 2016," she said. "He was chasing me. He was the same person, but the second time, he came close to me and told me he knew everything about me."

Hamid said she wanted to start a new life in Germany after facing atrocities by IS. She had notified police about the case, but added that it was impossible to feel safe knowing her former captor was still out there.

After reporting the second incident in February 2018 to the refugee center and local police, she says she was only offered a number to call in emergencies. That was when Hamid decided to leave.

"If I had not seen him, I would have stayed in Germany. I wanted to complete my studies and get a degree that would give me a decent life," she said.

Authorities confirmed on Friday that a 19-year-old had filed a complaint corresponding with Hamid's story. However, police in Baden-Württemberg say they did launch an investigation in March.

Local law enforcement put together a facial composite, but said the information Hamid provided was not accurate enough and that they were unable to match the name she gave them with any registered person.

Read more: No end to 'Islamic State' murders of Yazidis

Federal prosecutors took over the investigation in June, but by then Hamid was in Iraq with her family. The probe could not progress further because the "witness is currently unavailable" Baden-Württemberg police said in a Tweet on Wednesday.

The Federal Public Prosecutor's Office told Die Welt newspaper that preliminary proceedings into the case have been pending since July.

Many women in Germany 'have stories similar to mine'

In 2014, more than 5,000 Yazidis were killed and up to 10,000 kidnapped by IS, according to UN figures. Five of Hamid's brothers and one of her sisters remain missing.

While UN authorities rebuild houses in the Yazidi's ancestral lands in northern Iraq, some feel that the threat of IS lingers.

Hamid's father said his family is still at risk in Iraq, especially after his daughter came forward to tell her story. He said he was hoping to reach a country where they could finally feel safe.

For the moment, Hamid lives with her mother and father at a camp in Iraqi Kurdistan. But she urged German authorities to ensure her fate does not befall other Yazidis seeking refuge in the country.

"I want nothing from the German government except for that man to be punished, for them to realize that there are a lot of other women in Germany who have stories similar to mine, and to protect them from IS in Germany," Hamid said.