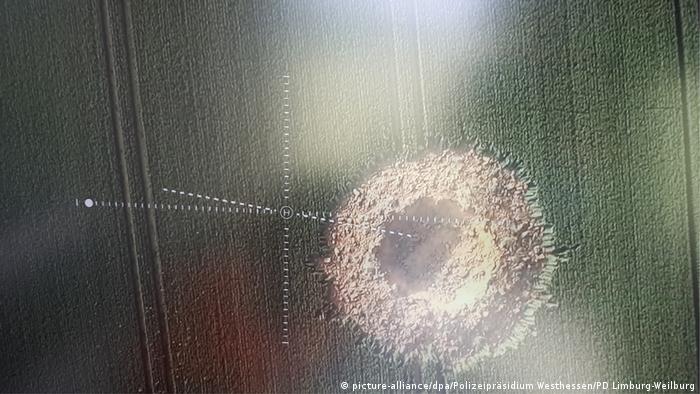 A loud explosion in a field startled residents in the town of Limburg in western Germany on Sunday. The blast occurred in the middle of the night and was large enough to register a minor tremor of 1.7 on the Richter scale, according to local media.

No injuries were reported, but the mystery explosion left a crater that measured 10 meters (33 feet) wide and 4 meters deep.

Bomb specialists from the state of Hesse determined on Monday with "a probability bordering on certainty" that it was a WWII-era unexploded bomb that caused the blast.

Prior to the news release, residents were puzzled and confused by the crater, with some online speculating that it had been caused by a meteorite.

But Rüdiger Jehn, of the European Space Agency, told German newspaper Frankfurter Neue Presse that this was false. "A great deal of heat is released during an asteroid impact," the ESA expert said, adding that no evidence of heat or melting could be seen from the crater footage.

The real culprit was an aerial bomb, which was buried at a depth of at least 4 meters, weighed 250 kilograms (550 pounds) and had a chemical detonator, investigators said. Authorities confirmed that the bomb had exploded by itself, without any external trigger.

Wolfgang Spyra, a professor and engineer at the Brandenburg University of Technology in Cottbus, told DW that a self-detonation of a WWII-era bomb is very rare in Germany and only occurs once or twice per year.

"In the case of bombs with chemical detonators, the materials of the detonator decompose over a long period of time," Spyra said. The decomposition of the detonator was the cause that authorities cited for the ignition.

Read more: WWII munitions: Time bombs at the bottom of the Baltic Sea

Limburg city spokesman Johannes Laubach told German news service NTV that finding a WWII bomb in the area was not at all surprising. "A former railway depot made this area a bombing target at the end of the war," he explained.

WWII ended more than 70 years ago, yet finding unexploded bombs in Germany is still a frequent occurrence.

Two unexploded bombs were discovered on Monday in the central German town of Giessen, prompting the temporary evacuation of some 2,500 people. Earlier this month, an unexploded device was defused in a busy area of central Berlin.

"The most frequently found explosives are cluster bombs, air bombs and bombs with incendiary materials, such as white phosphorous," Spyra said.

He warned that as bombs age and decay, they become more dangerous. This applies to both chemical detonator bombs like the one found in Limburg and conventional bombs, which tend to experience long-term corrosion.

Over time "this corrosion process leads to the weakening of the safety mechanisms within the bombs," Spyra explained.

A spokesman for the arms and munitions disposal service for the cities of Cologne and Düsseldorf echoed Spyra's assessment, telling DW that unexploded bombs in the ground "will not become less dangerous over time."

"Changes such as corrosion are visible from the outside, but any changes within the explosive ordnance cannot be detected" as the bombs are exposed to environmental changes, the spokesman said.

Between 1940 and 1945, some 2.7 million tons of bombs were dropped on Europe by US and British forces and half of them landed in Germany. Half of those that were dropped on Germany landed in North Rhine-Westphalia, the country's most populous state today.

Of the roughly quarter million bombs that did not explode, thousands are still hidden underground all over Germany.

Tens of thousands gathered in Dresden's old town to pay tribute to the victims of Allied air raids in 1945. The commemoration has taken place every year since 2010 and often attracts right-wing demonstrators. (13.02.2019)

D-Day marked the ultimate collaboration between wartime allies, but 75 years on, those bonds are fraying. Macron called for those ties to continue as countries observed the somber occasion. (06.06.2019)