A World War II bomb has been found and defused near the German capital's famous Alexanderplatz. Authorities say they were able to safely destroy the 100-kilogram behemoth's detonator. 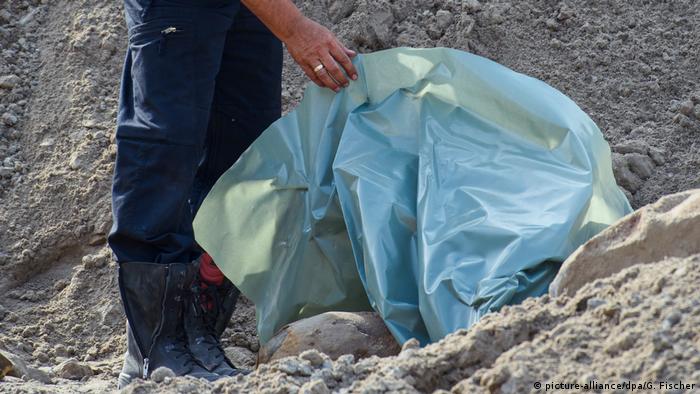 An unexploded 100-kilogram (220-pound) bomb from World War II was unearthed at a construction site near Berlin's Alexanderplatz and later defused, police said on Twitter in the early hours of Saturday morning.

Police said there were "unexpected technical problems" but that they were "quickly taken care of."

Authorities had closed off an area within a 300-meter (1,000-foot) radius of the bomb as it was being defused but said only part of the area needed to be evacuated.

The evacuation zone covered parts of the Alexa shopping area, an above-ground rail line, several busy roads and some residential tower blocks, including a nursing home.

The US bomb was found at a depth of about three meters and had an intact detonator, police said. It was to be defused throughout Friday, with authorities warning the operation could cause traffic disruptions into the night.

Nearly 75 years after the end of the Second World War, Germany is still littered with bombs and other unexploded ordnance. Experts have said that some 3,000 devices still remain in the German capital's subsoil.

Alexanderplatz is one of Berlin's busiest areas, with numerous shops and residences located near the square that is home to the city's iconic TV tower.

Berlin and Beyond: Bomb on my doorstep

During World War II, the Allies dropped more bombs on the German capital than anywhere else in the country. Clearing them, as Tamsin Walker recently found out, is a long and random process. (01.06.2018)

A thousand-pound US bomb dropped during World War II has been discovered in Hamburg. Authorities ordered the evacuation of a densely-populated residential area of the city, affecting around 6,000 people. (15.05.2019)