D-Day marked the ultimate collaboration between wartime allies, but 75 years on, those bonds are fraying. Macron called for those ties to continue as countries observed the somber occasion. French President Emmanuel Macron celebrated the strength and endurance of the multilateral bonds forged between World War II allies in two speeches marking the 75th anniversary of the invasion of Normandy.

Speaking at a ceremony honoring the contribution of Allied soldiers during the D-Day landing and the battle to liberate France, Macron thanked allies for their wartime efforts and focused on the importance of the international alliances that arose from the horrors of war.

"The United States of America is never greater than when it is fighting for the freedom of others," he told Americans gathered at the service overlooking Omaha Beach. He thanked the US for helping to save Europe from the grip of Nazi Germany, saying France must continue to work to be worthy of the sacrifice.

"We must never forget to keep alive the alliance of free people," Macron said, adding that's what the victors did after the war by creating the United Nations.

"It's what the US did in setting up the North Atlantic Treaty Organization, NATO. It's what, a few years later, the leaders of this continent did by bringing about the European Union.

"This promise of Normandy, we must find its essence once again to seize this commitment, what we owe to our homeland, to the alliance of countries with shared values, that of democracy and liberty."

Trump focuses on the US

Macron's speech ran in stark contrast to that of US President Donald Trump, who focused on the logistics, firepower and scale of the battle, as well as on recounting the efforts of soldiers during the invasion.

"These men moved through the fires of hell," he said. "They came here and saved freedom, and then they went home and showed us all what freedom is about."

He only briefly touched on the ongoing unity between the United States and France, saying "our bond is unbreakable."

The two leaders embraced and jointly awarded the Legion d'Honneur, France's highest award for merit, to five US veterans.

Trans-Atlantic relations have come under tremendous pressure since Trump's election in 2016, with Europe's liberalism and multilateralism a favorite target for the nationalist Trump.

Opinion: The forgotten lessons of D-Day 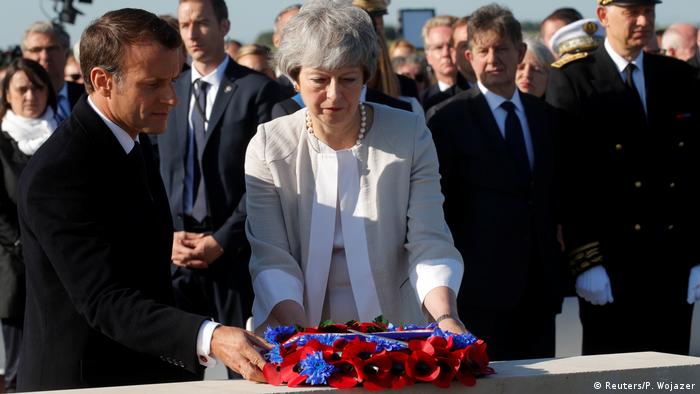 Similar calls for unity with the UK

Earlier in the day, Macron stood alongside British Prime Minister Theresa May to unveil a memorial honoring the British contribution to the D-Day landings.

The leaders laid wreaths at the base of a statue of three British soldiers during a somber ceremony at Gold Beach in Ser-sur-Mer, one of the landing sites for the largest seaborne invasion in history.

May and Macron spoke to a small audience of aging veterans, whom they thanked for their service.

May recalled the bravery and humility of the young men who stormed the French coast to help free the nation of Nazi Germany's brutal occupation.

Macron spoke of the enduring links between France and the UK, saying the statue was a "powerful symbol of unity."

"Nothing will ever wipe out these links and these shared values," he added.

Relations between mainland Europe and the UK are under particular stress after two years of failed Brexit negotiations.

Macron referenced this as he called for their bond to continue. "Whatever it takes, we will always stand together because this is our common destiny," he said in English.

On June 6, 1944, 24,000 Allied troops parachuted behind enemy lines in France, preceding about 160,000 troops storming Normandy's beaches. Tens of thousands of people died on the beaches, but the operation was successful, marking the beginning of the end for the Third Reich.

One notable omission from Thursday's ceremonies was Russia. About 27 million Soviet soldiers and civilians died during the war, and the country played a major role in the defeat of the Nazis. Soviet troops did not partake in D-Day hostilities (aside from forced conscripts in Germany's Ostlegionen), but Russians had been invited to previous memorials.

About 300 D-Day veterans are attending a military event in Portsmouth to honor WWII troops who landed in Normandy 75 years ago. US President Donald Trump, Germany's Angela Merkel and others are also paying respects. (05.06.2019)