Opinion: The forgotten lessons of D-Day

Representatives from a number of countries have commemorated the Allied landing at Normandy 75 years ago with a gigantic show. But some are forgetting the lessons we must learn from World War II, says DW's Martin Muno. 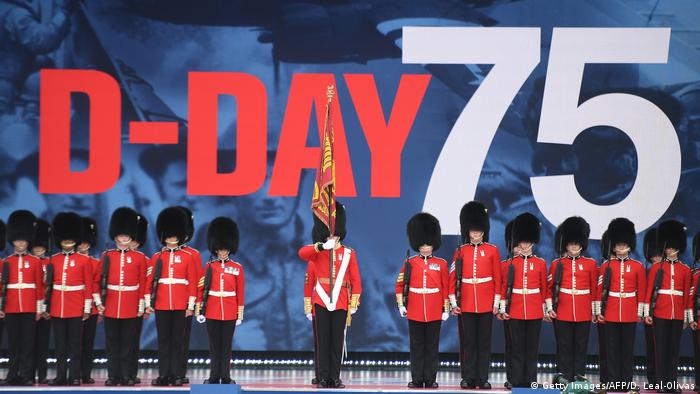 What a spectacle the ceremony marking the 75th anniversary of D-Day was — an enormous dome erected in Portsmouth, a multimedia show, and, as the government in London announced, "the biggest British military spectacle in recent history." It provided a pompous backdrop for the 300 veterans in Portsmouth who took part in the 1944 Normandy landing,but almost relegated them to the background.

But it is the weathered faces of those men — all of whom are now over 90 — that we should study to see just how important it is to reflect on National Socialism, World War II and the peace that most of Europe has known since 1945.

The dictum "never forget" applies, of course, to the murderous, anti-Semitic regime of Adolf Hitler and Nazi Germany, whose desire to destroy anything that did not conform to its narrow-minded vision of an Aryan super race inexorably led to war.

But those who do so must also remember the millions of people around the world who joined together to stand up to fascism; a stance for which they paid with their lives. The 150,000 Allied soldiers who took part in the Normandy landing 75 years ago represent that sacrifice, regardless of nationality.

Or, as former French President Francois Hollande noted at the 70th anniversary of the end of World War II: "The victory of May 8 was not a victory of one nation over another. It was the victory of an ideal over a totalitarian ideology."

'A question of war and peace'

The most shocking thing these days is that we must actively recall the factors that made peace in Europe possible in the first place. That means the urgency of recognizing human rights as the foundation of civilized order, of enforceable international law, multilateral cooperation and the rejection of every form of nationalism.

It is obvious that supranational institutions are necessary to ensure this. Germany's former chancellor, Helmut Kohl, never tired of emphasizing the fact that European unity was not only about economic cooperation, but rather, it was an existential question of war and peace.

Yet, that awareness is disappearing in many places. Even in the UK itself, the site of today's ceremony. Many there are convinced that the United Kingdom is better off on its own than in coalition with partners around the EU. And radical adherents to Brexit are even willing to suffer massive economic hardship as the price to be paid for their idea of national pride.

That type of ideology is spreading across the whole of Europe. The dark blossom of nationalism is not only thriving in Hungary, Poland, and Italy, but it has also gained a foothold in Germany, where the right-wing populist AfD has been gaining in popularity.

Of course, the personification of that distasteful spirit is US President Donald Trump: He has systemically abused other countries as a means to his ends of his "Make America Great Again" campaign — and he has no problem stoking economic crises, armed conflict, or climate degradation to achieve his aims.

Whereas the crucial lesson of D-Day and May 8 — which marked the end of World War II in Europe in 1945 — is surely this: Wherever nations work together they are successful. And where nationalism rules, violence and war are sure to follow.

France bans use of 'steak,' 'sausage' to describe vegetarian products 3h ago

Erdogan warns Sweden, Finland that NATO accession can still be blocked 4h ago