World leaders are paying tribute to former German Chancellor Helmut Kohl, who has died at the age of 87. The EU's Jean-Claude Juncker said flags would fly at half-staff in Brussels to honor a "great European." 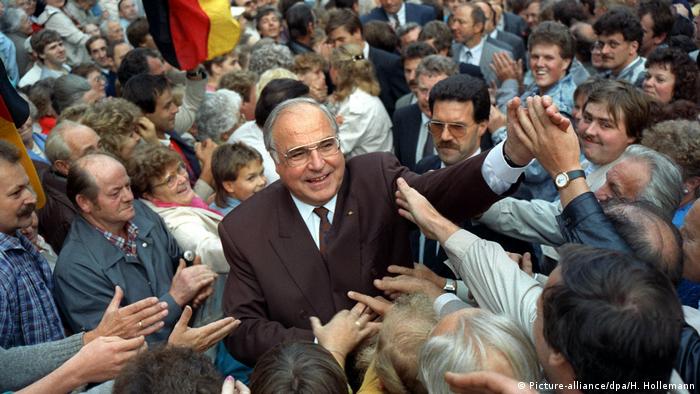 The news of Helmut Kohl's death, which broke on Friday, triggered a wave of responses from politicians around the world, expressing sadness at the passing of the leader credited with reunifying Germany.

Flags at European institutions would be flying at half-staff as a tribute to the man who "filled the European house with life."

'A rock - both steady and strong'

Former US President George H. W. Bush, who cooperated with Kohl and Soviet leader Mikhail Gorbachev to reunite East and West Germany at the end of the Cold War, also mourned Kohl's death.

Bush described Kohl as "a true friend of freedom," saying he considered him "one of the greatest leaders in post-war Europe."

"Working closely with my very good friend […] will remain one of the greatest joys of my life. Throughout our endeavors, Helmut was a rock - both steady and strong," Bush said Friday.

Kohl had spoken to his biographers at length about his friendship with Bush, whom he met while the American was still serving as vice president under Ronald Reagan.

Gorbachev, the last leader of the USSR, said Kohl was an "outstanding person" whose impact on world history would stand the test of time.

According to Gorbachev, the former German chancellor "would be noted in the chronicles of our time not only because of his personal qualities, but also because he found himself at the helm of his country during a time of unprecedented turmoil" including the fall of the Berlin Wall.

"In such cases, a lot depends on the people taking decisions. It was very fortunate that the leading countries, at the time, had statesmen with a sense of responsibility […] capable of reaching through the barrier of suspicion towards partnership and trust."

German Chancellor Angela Merkel was on a diplomatic visit to Rome when the death of Kohl, a Roman Catholic, was made public. She described her mentor as a "stroke of luck" for Germany.

"Helmut Kohl decisively influenced the course of my life, too," she said in Italy.

Her spokesman Steffen Seibert responded to the news on Twitter, saying Berlin was "deeply mourning" the death of the conservative politician.

Russian President Vladimir Putin sent his condolences to Merkel and German President Frank-Walter Steinmeier, mourning the passing of "one of the patriarchs of European and global politics."

"I was fortunate to personally meet Helmut Kohl. I was honestly amazed by his wisdom, his ability to take thought-out, far-sighted decisions even in the most complex of situations. In Russia, he will be remembered as a principled advocate of friendly relations between our countries," Putin said.

French President Emmanuel Macron posted a German language tweet praising Kohl for paving the road to "united Germany and German-French friendship," showing a renowned image of Kohl standing side-by-side with the late French President Francois Mitterrand. The two leaders were in Verdun marking the 70th anniversary of the start of World War I.

President Steinmeier said Kohl was an "exceptional politician" with a "strong character."

"He was deeply convinced that Europe was our destiny," Steinmeier said.

"Helmut Kohl was the chancellor of German reunification; in 1989 it was thanks to his spirit, his political courage and his leadership that the restoration of German unity was made possible," Schulz said. "Kohl's vision of a European Germany, which guided this great statesman in the reunification just as much as the Treaty of Maastricht, is a legacy to the German nation and to all of Europe."

Even Germany's Left party, the spiritual successor to the East German communists, said that Friday's focus should be on "mourning a great European." The party leaders hinted that Kohl's tenure was more productive than that of his successors Gerhard Schröder and Merkel. He embodied German reunification, they said, "even if the course he set led to severe social upheaval in eastern Germany."

Helmut Kohl remains the longest serving German chancellor, from 1982 to 1998. Kohl's successor in the chancellery, Gerhard Schröder, praised Kohl as a German patriot.

"Even though we led a tough election battle in 1998 and differed on many political issues, I have the greatest respect for his historic efforts," Schröder said.

Israeli Prime Minister Benjamin Netanyahu described Kohl as a "friend of Israel" who was "fully committed" to the security of the Jewish state.

"We have lost the father of modern Germany," she said in a statement.

UN Secretary-General Antonio Guterres also mourned Kohl as a "personal friend" and praised his historic role in uniting Germany, according to his spokesman Stephane Dujarric. The UN chief served as Portuguese prime minister between 1995 and 2002.

US President Donald Trump hailed the former German chancellor as a "friend and ally of the United States."

In a statement released by the White House, Trump said: "He was not only the father of German reunification, but also an advocate for Europe and the transatlantic relationship. The world has benefited from his vision and efforts."

Former US President Bill Clinton said Kohl's "visionary leadership prepared Germany and all of Europe for the 21st century."

"I will never forget walking with him through the Brandenburg Gate in 1994 for a large rally on the eastern side, and seeing genuine hope in the eyes of tens of thousands of young people," he said. "I knew at that moment that Helmut Kohl was the man who could help them realize their dreams. History continues to prove that he delivered."