After their delayed flight to Qatar and the Club World Cup starting two months late, Bayern got down to business with a 2-0 semifinal win over Al Ahly. Robert Lewandowski of course scored both goals. 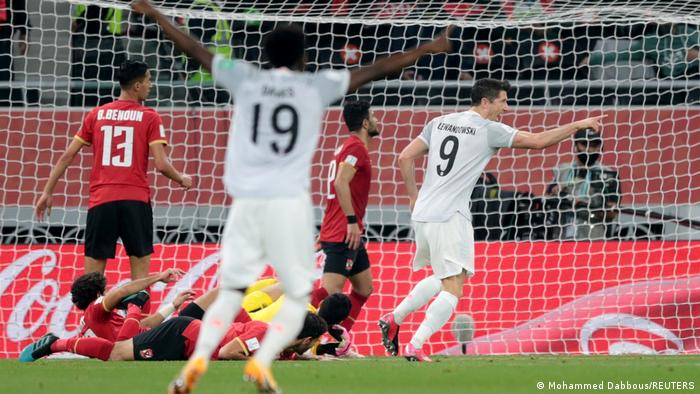 Bayern Munich's quest for a sixth straight title in all competitions began with a 2-0 win over Egypt's Al Ahly in the semifinal of the Club World Cup in Qatar on Monday.

Robert Lewandowski continued the incredible scoring form, which had helped the European champions reach the tournament, with a 17th-minute opener and a second on 86 minutes.

Bayern will face Tigres in Thursday's final in Qatar after the Mexicans stunned South American champions Palmeiras 1-0 on Sunday to become the first team from North and Central America and the Caribbean to reach the final.

In the end, the semifinal was tighter than it should have been for a largely dominant but tired Bayern, playing in front of half-packed stands at the Ahmed Bin Ali 2022 World Cup stadium, with 12,000 fans socially distanced because of the coronavirus pandemic.

"It was a bit strange to play in front of fans again. But we achieved our aim of reaching the final," Thomas Müller told Bild Live. "It was a nice game, Al Ahly are like the Bayern of North Africa. We should have got the second goal earlier."

Hansi Flick's side had raced straight from their 1-0 Bundesliga win at Hertha Berlin on Friday to the airport. But their hopes of a scheduled arrival in Doha were dashed by Berlin airport authorities who would not let them take off after midnight. Bayern had to wait on the plane until 7:00 a.m. the next morning before jetting off.

The Bavarians were furious at the holdup and let their frustration drive them on to a strong early showing against African champions Al Ahly.

Serge Gnabry and Müller, part of a first-choice Bayern lineup, went close before who else but Lewandowski scored the opener from Gnabry's layoff.

Bayern players were practically lining up to score but it was their top striker who took his time to fire home inside the box.

Lewandowski is the jewel in the crown of a side who have won the last five trophies they have contested - their 2020 Bundesliga, German Cup and Champions League treble triumph being followed by domestic and European Super Cup wins this campaign.

Holstein Kiel will claim Bayern no longer hold the German Cup after their humbling defeat to the second division side last month, but their pursuit of the Club World Cup trophy should have come during the same calendar year as their other successes.

The pandemic led to the event being postponed from December to February, given some continents had not even completed their competitions and nominated their entrants.

The rescheduling has added to Bayern's immense on-field workload during the global crisis — with another Bundesliga game due on Monday against Arminia Bielefeld and their Champions League last 16 first leg at Lazio coming up on February 23. 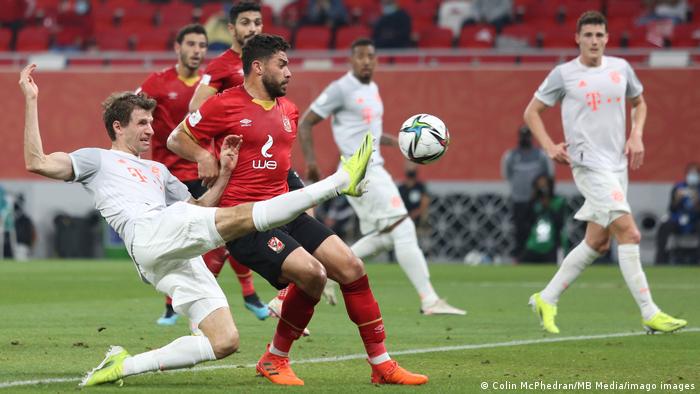 Al Ahly gave a good account of themselves in Qatar

But Flick prefers not to experiment and plays his tried and tested players when possible, risking injury and exhaustion but in this patchy affair giving Al Ahly no real chance.

The Egyptians, who beat Qatari hosts Al Duhail in the previous round and are known as the African team of the last century, had their moments in attack through Taher Mohamed but Bayern always looked dangerous.

Further chances came and went for the Bavarians with Marc Roca among those threatening.

The European team has never failed to reach the final of the Club World Cup and although Al Ahly made a decent start to the second period, Bayern avoided conceding any clear-cut chances and finally grabbed their second when the unmarked Lewandowski headed in substitute Leroy Sane's cross.