On Conflict Zone, Bundestag President Wolfgang Schäuble discussed the chancellor's bombshell decision not to seek re-election. It was a "tectonic change," but he predicted Merkel would see out her term.

"She's taken the right decision at the right time."

The president of the German parliament, the Bundestag, is adamant that Chancellor Angela Merkel will see out her fourth term in office until it expires in 2021.

Wolfgang Schäuble told Tim Sebastian on DW's Conflict Zone political talk show that Merkel's decision not to seek further terms as either the chair of the conservative Christian Democratic Union (CDU) or chancellor did not leave her "too wounded" to lead the country until the end of the current legislative period.

"Once elected as chancellor, you can only be thrown out without your own agreement if there is a majority in parliament who elects another chancellor," Schäuble said. "That's unthinkable in this parliament. So her position is constitutionally strong."

Schäuble's word carries particular weight as one of the most experienced and respected leaders in the CDU and as the senior figure in the Bundestag. It's the same institution with which Merkel must continue to work now that her political days are numbered.

Two of her prominent rivals, Health Minister Jens Spahn and Friedrich Merz, as well as her ally Annegret Kramp-Karrenbauer, have announced that they will seek to succeed her as party chair at the CDU conference in early December. Nonetheless, Schäuble said Merkel's position remained tenable.

"The party enjoys having the chancellor as a member instead of as a member of another party," Schäuble said. "I think the party will be fine with this."

When asked for the reason for the relatively sudden decline of Merkel, a leader often regarded as invulnerable in the past, Schäuble responded: "Nobody knows." He interpreted it as a sign of the times.

"Our Western system of democracy, the rule of law and parliamentarianism, is under stress," the Bundestag president explained, moving on to reference Brexit. "Look what happened in the UK, the (point of) origin of modern parliamentarianism. The most important decision of this century moved from Westminster to a referendum. Crazy."

Schäuble added that there was volatility all over the European Union and spoke of a "tectonic change" in democracy itself. This, in turn, he attributed to a "disruption" in traditional means of communication by "new technologies." 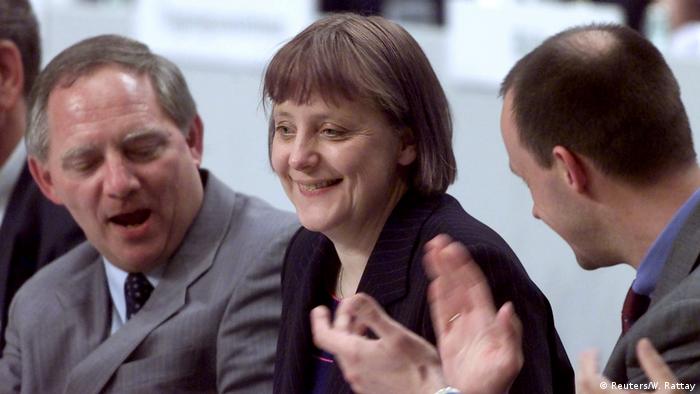 Schäuble and Merkel's relationship goes back a long way

Schäuble, who was once tipped as a successor to former chancellor and CDU icon Helmut Kohl, but who lost a power struggle at the start of the millennium with Merkel, praised her tenure as Germany's leader as "extraordinary successful." And he was at pains to dispute the idea that Merkel's lame duck status left her significantly weakened as a leader.

Schäuble did concede that ups and downs were part of human life and "she's going down." But he sought to argue that the CDU would rally around Merkel now that she has set an exit date.

"She's wounded, and she's strong — both together," Schäuble said. "We agree in my party that we will do what we can to avoid the impression of [her being a] lame duck."

Schäuble acknowledged that the succession battle had begun, but said it wouldn't be "that bloody." And he refused to comment on Merkel's likely replacement.

Asked to discuss the other repercussions from Sunday's regional election in Hesse, which preceded Merkel's announcement, Schäuble said the "worst thing" was that the far-right Alternative for Germany (AfD) party was now represented in all 16 state parliaments as well as the Bundestag.

But he also highlighted what he characterized as a slowing of the right-wing populists' momentum. And he bristled at the idea that CDU policies, particularly on migration, opened the door for the AfD. Citing other countries like Sweden, he said having a prominent far-right party was the norm in Europe.

"Seventy years after the creation of the Federal Republic of Germany, it seems like we move to toward something like European normality," Schäuble said. "I don't like it, but it's a matter of fact."

He defended Merkel and the CDU's welcoming policy toward the hundreds of thousands of migrants in 2015 as a "huge achievement" that had earned Germany respect around the world. And he stressed that although the AfD took around 13 percent of the vote both in Hesse and countrywide, most Germans didn't support the AfD.

"Germany will never ever relapse into nationalism," Schäuble said. "The broad majority of German people will never move toward nationalism, I'm quite sure."

You can watch the complete interview with Wolfgang Schäuble on DW's Conflict Zone at 1730 UTC Wednesday.