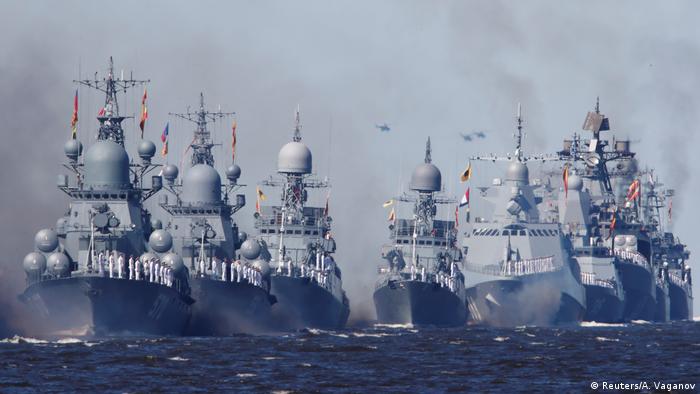 Vladimir Putin wants to see Russia establish a naval base abroad for the first time since the collapse of the Soviet Union. In mid-November, the president ordered the Defense Ministry to sign an accord with Sudan. Along with the still-active Cold War-era Tartus facility in Syria, this would not only be the second Russian naval base in the Middle East and North Africa — a region that has become increasingly important for Moscow — but worldwide, apart from a fleet on the annexed Crimean Peninsula, which Kremlin officials do not currently consider extraterritorial.

A draft agreement published by Russia only provides for a logistics and repair base on the Red Sea for the time being; however, the navy would be allowed to station up to 300 military staff there — enough to supply four warships, regular- and nuclear-powered. Presumably, the focus is on nuclear-powered submarines rather than ships as Russia's fleet only has one operational nuclear-powered battle cruiser, the Pyotr Veliki (Russian for Peter the Great). A second battle cruiser is currently being modernized.

Admiral Viktor Kravchenko, the former chief of staff for the navy, told the Interfax news agency that the fight against pirates around the Horn of Africa justified Russia's establishing a base for logistics and repair. "It is a tense region," Kravchenko said. "A Russian naval presence there is necessary," he added, hinting that the facility could one day be developed into a fully fledged base.

Cultivating the image of a world power also plays a role, observers say. "Russia defines itself as a player right on the spot in this important region of the world," Rolf Welberts, a former German ambassador to Sudan who has also served as head of the NATO Information Office in Moscow, told DW.

The United States, France and China have naval bases in Djibouti on the Red Sea. According to the media, Russia has also showed an interest.

Apart from prestige, Russia could conceivably also be after the extraction of raw materials in Sudan and the power to "cut off trade routes in case of conflict with the West," Alexander Golz, a Russian military journalist, told DW.

The Soviet Union had outposts in Ethiopia and Somalia to counter the fact that the United States had a naval base on the Indian Ocean. Today, it seems the Red Sea is important as a region and point of access to the African continent for Russia.

"The Red Sea has become a geopolitical hot spot," said Annette Weber of the Berlin-based German Institute for International and Security Affairs. The war in Yemen, in which several countries in the region — including Sudan — are involved, was a starting point, she said. "It's a fantastic deal for Russia" that has strengthened its influence, Weber said. The expert described Sudan as "extremely important" in terms of trade, smuggling and migration routes.

Until a few years ago, Russia and Sudan did not have very close ties. That changed in 2017, when Russia's president welcomed his Sudanese counterpart at the time, Omar al-Bashir, in Sochi.

Russia's government was sending the message that it was ready to work with Sudan when other countries would not, said Kholood Khair, a managing partner at Insight Strategy Partners, a policy think tank based in Sudan's capital, Khartoum. The country is on the US state sponsors of terrorism list, and al-Bashir was indicted by the International Criminal Court for war crimes in Darfur. Sudan is currently trying to get itself removed from the list to end years of isolation.

At the 2017 meeting with Putin, al-Bashir ranted against the United States, described Sudan as "Russia's key to Africa" and introduced the issue of a naval base — supposedly as a protective measure against the US. Reports followed about Russian companies mining gold in Sudan and a dubious private military named the Wagner Group that was said to have advised al-Bashir's security forces during an uprising in late 2018. Russian officials confirmed a military presence in Sudan, but denied involvement in breaking up protests.

Read more: As Russia battles coronavirus, its military pushes ahead with recruitment

Al-Bashir was toppled in April 2019, and Sudan has since been ruled by a joint body of civilians and military staff, the Sovereignty Council. The military is the stronger partner, Khair said. Russia kept its contacts in Khartoum thanks to Mohamed Hamdan Dagalo, more commonly known in Sudan as Hemeti. The general is the deputy chairman of the Sovereignty Council and, Khair said, "the most influential man in the country."

Khair said Sudan's gold could be one reason for Russia's heavy investment into ties with al-Bashir and now Hemeti. She added that there have been reports of Russian soldiers and private security companies guarding the gold mines in the north, to which Hemeti is also connected. Gold is one of the key sources of income for Sudan, which has been devastated by sanctions, corruption and inflation.

It is unclear whether Russia sees Sudan as a springboard in the region. However, military advisers and mercenaries have been seen in at least two neighboring countries: Libya and the Central African Republic. That appears to be part of Russia's strategy of establishing new ties with Soviet-era allies. The Sovereignty Council sent emissaries to the first-ever Russia-Africa summit in Sochi in October 2019.