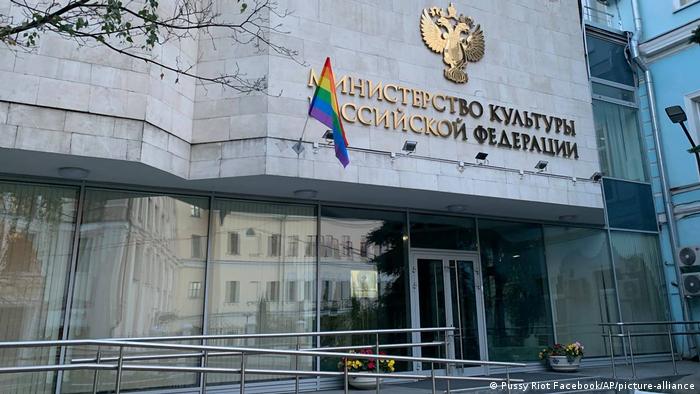 Their action, during which the rainbow flags were hung at buildings such as that of the Presidential Administration and the Culture Ministry in Moscow, aimed to draw attention to discrimination against the LGBT+ community in Russia.

On its Facebook page, the group last month described the protest action as a "birthday gift" to Putin. Pussy Riot, seen here on tour in Germany in 2019, are known for their provocative actions

While homosexuality itself is not illegal in Russia, the country does have a controversial law banning "homosexual propaganda" that critics see as condoning homophobic behavior and undermining much-needed support for LGBT+ youth.

The influential Russian Orthodox Church also plays a role in stigmatizing the LGBT+ community and fomenting hostility toward it.

Pussy Riot has often been in the news for its radical protest actions, which often target Putin's policies. The group rose to worldwide fame after a protest in Moscow's Cathedral of Christ the Savior in February 2012. Three members of the group, including Alyokhina, were given jail sentences.

Three members of the Russian band Pussy Riot have been jailed for two years for staging a protest against President Vladimir Putin. World leaders have joined protesters around the world in condemning the verdict.

Russian activist Pyotr Verzilov is under police protection in Berlin after suffering an apparent poisoning attack in Moscow. Speaking to DW, Verzilov says he had been targeted over his investigative work.