Will K-Pop diplomacy ease tension ahead of Korea talks?

North Korea has agreed to a pop concert with South Korean performers in Pyongyang ahead of bilateral talks. Can an exchange of culture and music smooth the way for tougher discussions? Julian Ryall reports. 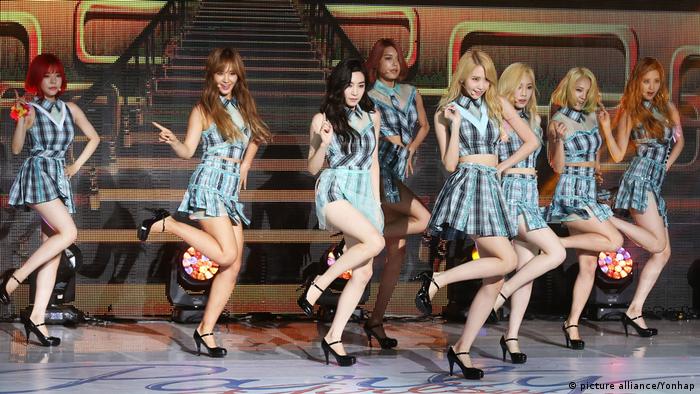 South Korean officials said Tuesday that 160 "K-Pop" singers, musicians and dancers will travel to North Korea in early April for the first performances in the North by South Korean artists in more than a decade.

During talks held at the village of Panmunjom, which sits on the demarcation line between North and South Korea, representatives of the two governments agreed that the South Korean artists would travel to Pyongyang on March 31 for four days and give two performances at the East Pyongyang Grand Theater and the 12,000-seat Ryugong Jong Ju Yong Gymnasium.

The decision to send some of the biggest names from the South's hugely popular K-Pop scene comes after a group of North Korean singers and musicians traveled to the South during the recent Pyeongchang Winter Olympic Games, attracting a vast amount of attention during a series of performances.

The hope, it appears, is that "soft power" diplomacy via pop music will help pave the way for the leaders of North and South Korea to make genuine progress in reducing tensions and ending a 73-year standoff that has divided the Korean Peninsula and its people.

Read more: South Korea: 'Too early to be optimistic' on North

The South Korean delegation will include pop legend Cho Yong Pil, the five-strong girl group Red Velvet and the solo singer Seohyun, who was a star with the super-group Girls' Generation.

The performers will be headed by Yoon Sang, a well-known composer and singer who led Tuesday's discussions on behalf of Seoul.

"Our goal is to impress North Koreans in the same way that South Koreans have been moved by their musicians," he said in a press conference in Seoul after the agreement had been reached.

"It is diplomacy by alternative means because both governments want to show to their own people and the wider world that they are trying to achieve a lasting peace," Song Young Chae, a professor at the Center for Global Creation and Collaboration at Seoul's Sangmyung University, told DW.

"And while achieving peace after all these years of tension is going to be difficult to achieve in the short term, these sorts of exchanges – culture, music, entertainment – are much easier to arrange and have much less risk attached to them."

"It is all about deepening understanding between the two sides, of exchanging cultural opportunities and – hopefully – making the more difficult issues slightly easier to reach agreement on," said Song.

Song added that despite strenuous efforts by the North Korean regime to keep foreign influences out of the country, plenty of South Korean music, movies and television programs have been smuggled into the North and given the people there a glimpse of life beyond their borders. 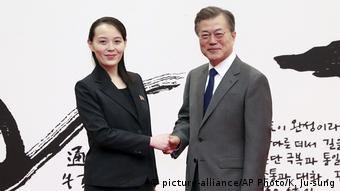 South Korean television is popular with ordinary North Koreans because it shows off levels of affluence that the vast majority can only dream of. This has made shows that are smuggled into the North unpopular with the regime, which punishes anyone found watching foreign programs.

Similarly, North Korean music may have a pop beat but it conveys a very different message to music in the South. While exotically dressed stars in Seoul sing about relationships and love, their more soberly attired North Korean counterparts perform songs in honor of the socialist regime or the Kim family.

Recent releases in the North include "We shall hold bayonets more firmly," or, "My country, full of happiness" and "Potato pride."

Stephen Nagy, a senior associate professor of international relations at Tokyo's International Christian University, believes Pyongyang is very keen to use cultural events to demonstrate to the South that it is not a threat – although he remains deeply skeptical that Kim's regime has genuinely changed its attitude towards the rest of the international community.

"They see this as a great opportunity to promote inter-Korean harmony, to increase dialogue and reduce tensions on the peninsula," he told DW.

"But cultivating the South is also designed to encourage Seoul to feel close to the North and push back against efforts by the US or Japan to pressure Pyongyang."

"The North has been very clever in its approach,” added Nagy. "They know that the present government in Seoul has a very strong inclination towards reunification and by reaching out they are promoting the hope that might be possible."

"To my mind, it is a completely false hope, but it is still a hope for the South and it serves the North by helping to fracture Seoul's relations with the US and Japan."

Nagy also believes the South had no option but to accept soft diplomacy overtures.

"When the North reached out ahead of the Winter Olympic Games, Moon really had no option but to respond positively," he said. "It costs nothing to engage and failing to do so could have caused the North to react aggressively during the Winter Olympics, which the South was desperate to avoid."

Nagy remains a pessimist about the outcome of the planned Moon-Kim summit, however, largely because the South realizes that reunification would be far too costly and the two societies are too fundamentally different.

And all the soft power and ballads that are scheduled for Pyongyang will not be sufficient to rewrite that reality.

South Korea to send special envoys to North for talks

Seoul says it will send a 10-member delegation to North Korea for talks on promoting peace on the Korean Peninsula. The announcement comes amid a rare thaw in ties between the two sides, driven by the recent Olympics. (04.03.2018)

Opinion: A showdown of the alpha males

Donald Trump and Kim Jong Un have so far been busy trading threats and insults. The US president’s planned meeting with the North Korean leader marks a surprising turn in the decades-long conflict, says Alexander Freund. (09.03.2018)