Will former wife′s ′tell-all′ book hurt Imran Khan in upcoming Pakistan election? | Asia | An in-depth look at news from across the continent | DW | 06.06.2018

Leaked content of an upcoming autobiography by Imran Khan's ex-wife Reham Khan has stirred a huge controversy in Pakistan. Does the book have the potential to hurt Khan and his PTI party in the July 25 general election? 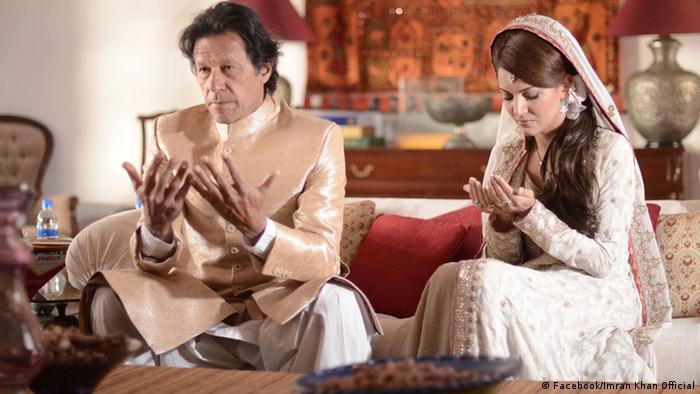 A day after some parts of Reham Khan's upcoming autobiography were leaked on the internet, supporters of Pakistan Tehreek-e-Insaf (PTI, Movement for Justice) took to social media and accused the 45-year-old British citizen of being involved in a vicious campaign against the cricketer-turned-politician. Some alleged that the ruling Pakistan Muslim League-Nawaz (PML-N) party sponsored the book to politically harm Khan.

Reham was married to Khan from January 2015 to October 2015. The opposition politician re-married earlier this year, his third, with Jemima Goldsmith (Jemima Khan) being his first wife.

The unpublished book attempts to "reveal" personal details about Reham's life, with her brief companionship with Khan said to be featuring in it prominently. Reham, also a journalist and social activist, has been critical of Khan's politics ever since the couple decided to part ways.

"A close source has informed me that Reham was given £0.1 million (€114,343) by PML-N to write the book," Salman Ahmad, a Pakistani musician and PTI activist, told media, adding that Reham had also offered him money to malign Khan. "I have all the evidence. I have the email that she had sent me," he alleged.

"According to her (Reham), Imran Khan is a hypocrite and a liar who doesn't fast or pray."

Fawad Chaudhry, PTI's spokesperson, said the timing of the book's release was aimed at creating negative opinion about Khan and his party. "I call it pre-poll rigging," he said. 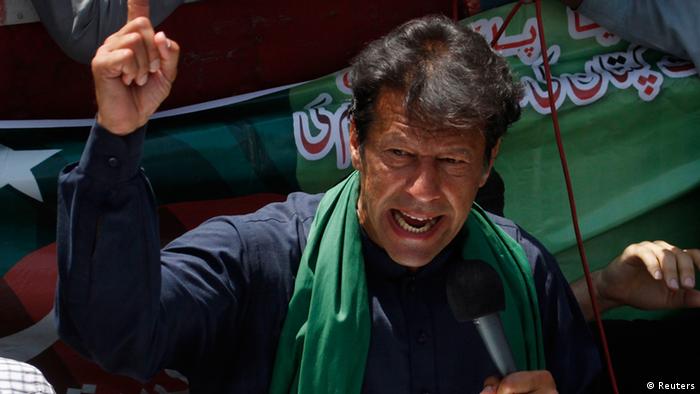 In a DW interview, published on March 16 of this year, Reham Khan said the book was not exclusively focused on Khan: "The book tells the story of my life, my experiences, and my journey through different continents, different cultures. My marriages are a part of my life and so have been included in the book. It is an honest account."

She also denied that the timing of the book release has anything to do with elections. "Firstly, we do not know if the elections will take place at all this year. Secondly, it took me a while to put down painful memories on paper," she told DW.

Pakistan: Will general elections be held on time?

"It was like scratching a wound. I think that the people in Pakistan, policymakers and [foreign] investors should learn from my experiences. If there are to be elections this year, I think the book will be very helpful to all those who want an insight [into Pakistan]," Reham added.

Khan's PTI demands a ban on the book in Pakistan, and may also sue their leader's former wife in Britain on defamation charges. A number of legal notices against Reham have already been filed in Pakistani courts.

Reham, on her part, accuses PTI officials of "fraud and theft," saying how anyone could read the book when it's not even published.

In a response to a tweet by a PTI supporter, Reham said: "How do you know who is mentioned [in the book] and who isn't? Have you hacked a copy of my book too? My life has taken me to a lot of places and down many roads. It mentions many people but doesn't focus on anyone except me."

A dent to Khan's image?

Pakistan will hold parliamentary elections on July 25, with Khan hoping to emerge victorious and become the next prime minister. The ruling PML-N has been under pressure after the Supreme Court ousted its leader and former PM Nawaz Sharif on corruption charges last year and banned him for life from politics this year.

Sharif's supporters claim that Pakistan's powerful military generals want to keep the ex-premier out of politics because of his insistence on civilian supremacy and better ties with India and the US. Khan is believed to be a candidate that the army prefers over Sharif to form the next government, a claim PTI denies.

"We had doubted, but now we are sure that it was Sharif who commissioned Reham to write this book. PML-N is promoting the autobiography, which aims to damage Imran Khan's reputation. Reham is trying to exact revenge on Khan. We will not allow this book to be published in Pakistan. It is mere propaganda," Syed Shibli Faraz, a PTI official, told DW.

Sharif's party denies involvement in the book saga, saying a personal matter is being unnecessarily made political by the PTI.

"The book deals with personal issues. Two people tied the knot, and then got divorced. The ex-wife now wants to publish a book based on her views and whatever information she has. What's the problem with that?" Abdul Sattar, a former PML-N lawmaker, told DW.

But personal matters in Pakistani politics are as important as in any other country. Despite his relentless public and legal campaigning against former PM Sharif, Khan has still not been able to turn the political tide in his favor in the most-populated Punjab province, which remains a Sharif stronghold. A controversy about his personal life is something that Khan would not want so close to the election.

Khan's "playboy image" during his time in England, where he played county cricket, has been quite controversial in the Islamic country. 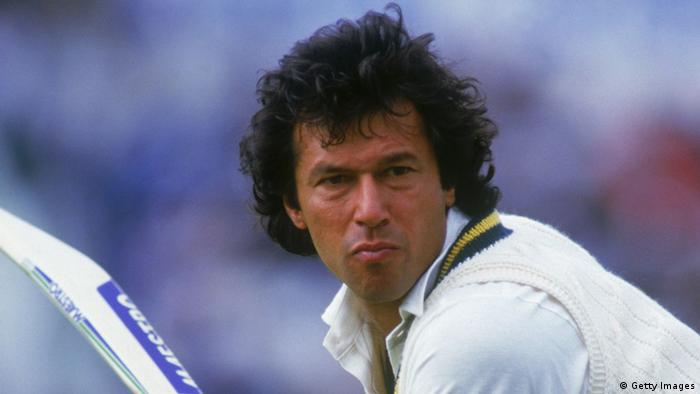 Khan is considered one of the greatest all-rounders in cricket

From cricket star to a top politician

Pakistan's former cricket captain Khan entered politics in the late 1990s, forming the PTI party. Although he was loved by millions in the country as one of the greatest cricketers the country has ever produced, and more significantly, under whose leadership Pakistan won its first Cricket World Cup [one-day format] in 1992, Khan wasn't considered a serious politician even by his ardent fans. But he is now one of the key players in Pakistani politics.

Khan's PTI came third in the May 2013 parliamentary elections and formed government in the northwestern Khyber Pakhtunkhwa province bordering Afghanistan.

Khan wants Islamabad to make peace with the Tehreek-i-Taliban Pakistan (TTP) and sever its alliance with the US in the "war against terror."

The manifesto of Khan's party resonates well with a large section of the Pakistani middle class due to its emphasis on governance issues — particularly corruption and political accountability.

But some observers argue that Khan is backed by Pakistan's right-wing groups, and in particular the military establishment, because of his "soft" stance on the Taliban and other Islamist militants. His rise in Pakistani politics, they claim, is due to his "good relations" with the military's Inter-Services Intelligence organization. Khan agrees with the agency's position on matters such as Afghanistan and Pakistan's national security, they say.

But most people in Pakistan are not bothered about the country's Afghanistan policy or its ties with Washington. They need jobs, security and an end to corruption in governmental departments. For them it is not important whether friendly ties with India would put Pakistan on the path of progress in the coming years; they want change now. That is why Khan has been able to capitalize on public sentiment against "traditional" politicians like the Sharifs and the Bhuttos.

Some analysts say that the debate about Khan's Islamist or liberal credentials is actually taking the spotlight away from his performance as a politician and the leader of a party which governed an important province of the country.

Khan promised speedy justice and an end to corruption in the Khyber Pakhtunkhwa province after taking its reins in 2013. During the election campaign, he also said his party would curb violence and bring peace to a restive province bordering Afghanistan.

Khan's PTI was in power in the province for five years, yet critics say that most of his election promises were not fulfilled.

"Things are pretty much the same as they were in the past. Khan's party workers consider themselves to be above the law and won't cooperate with the administration. If the PTI officials don't obey the law, how will the governance be improved?" Islamabad-based activist Arshad Mahmood told DW.

But Khan's supporters, which comprise mainly Pakistani youth, feel his administration is being unfairly criticized.

"The [provincial] government made great strides into a faster and more effective judicial system. The education budget of the province was much bigger than in other provinces," Zakria Zubair, a young entrepreneur in Islamabad, told DW. The 31-year-old PTI supporter also says that Imran Khan played the role of a competent opposition leader in the country's lower house of parliament.

What's next for Reham and Imran Khan?

Khan is aiming to cash in on the rifts between the military and ex-premier Sharif as well as his own charisma as a politician to win the July 25 elections. But political analysts say it will be a Herculean task for him to secure a clear majority in the next parliament.

His ex-wife's book is unlikely to have a big impact on the July vote, partly because the rural population in the country cast their ballots based on local affiliations and performance.

The "tell-all" autobiography, however, has done good to Reham, as the book has received immense promotion due to the controversy. Media reports say the book will hit stores in early July.

When the year 2017 draws to a close, Pakistan finds itself swamped by the politics of darkness and deceit. After 70 years, it remains a state in transition in terms of both economy and polity, writes Harris Khalique. (15.12.2017)