Germany: Laptop-stealing wild boar could be shot | Germany | News and in-depth reporting from Berlin and beyond | DW | 14.08.2020 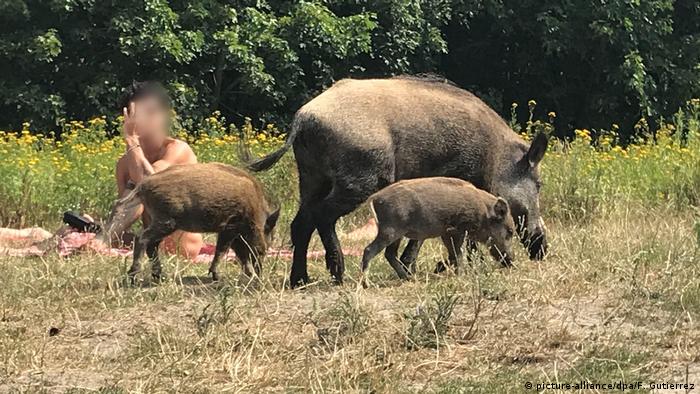 The wild boar who starred in a viral video after stealing a bag at a Berlin beauty spot could be culled, local media reprorted Friday, as concerns grow over increasing interactions between the local wild boar population and humans.

The sow, who was filmed running away with a yellow bag containing a nudist bathers laptop and followed by her two piglets next to Teufelssee lake, would be "primarily taken" — meaning culled, Katja Kammer, head of the Grunewald forestry commission told public broadcaster rbb24.

Wild boars can be aggressive and carry diseases but they usually avoid people being naturally shy, explained Kammer. However, the coronavirus pandemic has seen many more people head outdoors for a socially-distanced summer, making it more difficult for boars to get their own space.

The boars were also attracted to the lake due to the extreme summer heat and the "huge amount" of litter left by bathers.

Once they have moved into an area, the wild pigs would not freely leave, meaning culling is the only option to reduce interactions between animals and humans, said Kammer.

"Fortunately there have not yet been any serious clashes between wild boars at Teufelssee," said Kammer.

Wild boar culling is business as usual to keep boar numbers under control in the 3,500 hectare Grunewald area where they have no natural predators, she added.

There is still some hope for the viral hog due to her being "an especially intelligent sow," according to Kammer.

While wild boar culling is legal, laws state that a mother boar with piglets under six months old cannot be shot.

Finally, her chosen home next to the lake could also save her, as hunters are banned from firing shots with so many people around.

A hunter in northern Germany has been killed by a wild boar he was trying to shoot. There are conflicting reports as to whether the pig was injured.

The men were injured when the animal turned and attacked, leaving one of them in critical condition. A debate over hunting has continued to gain momentum in France due to the high number of humans being killed.