Some 450 pig farms in the western Polish province of Wielkopolska — located near a farm where African Swine Fever (ASF) was recently found — have been placed in lockdown. Meanwhile, German authorities across the border are increasingly concerned after a sick wild boar was found 10 kilometers (6 miles) from the Polish border having swum what appears to be a significant distance.

Wild boars carry the disease — a highly contagious virus which is fatal to pigs — and it often enters the farm pig population via blood carried by boar hunters.

Some fear a repeat in Germany of what happened in China. One of the largest outbreaks of the ASF virus began sweeping through China's pig farms in August 2018, wiping out 40% of the country's pig population. "That's roughly 300 million to 350 million pigs lost in China, which is almost a quarter of the world's pork supply," Christine McCracken, a senior analyst at RaboResearch, told NPR. "It's a massive number."

As the world's main importer and producer of pork, the result was rising inflation. As pork prices rose over 110% in China, the Consumer Price Index (CPI) went up 4.5% in December. Although pork prices make up a considerably smaller part of the German inflation basket, the impact could nonetheless add to the existing economic problems caused by COVID-19.

If a single case of ASF is found on German territory, the country will be banned from exporting pigs to China. Experts fear this in turn could lead to Beijing flooding the EU market and depressing prices. Germany is Europe's biggest pork producer with about 26 million pigs, and also the EU's second-largest pork exporter to non-EU markets, after Spain. Most German exports go to China, South Korea and Japan.

The virus has been present in eastern Poland since 2014 and was discovered for the first time in a separate cluster in wild boar in western Poland last November. Since then it has reportedly spread to 720 sites in three provinces in the west of the country, and an outbreak was confirmed on April 7 on a farm near the village of Wieckowice, near Poznan, 150 kilometers from the German border.

The source of the infection were ASF-positive piglets that the farm owner, Smithfield Foods' subsidiary Agri Plus, bought in mid-March. The shipment of 1,000 animals took place prior to the date ASF was confirmed at another farm. The farm in Wieckowice specializes in fattening piglets up to 30kg and had 10,000 piglets that had to be culled, local authorities said.

The infection at the first farm, with 23,700 pigs near Niedoradz, Lubusz province, 88 kilometres south west of Wieckowice, was discovered on March 23. In the weeks prior to the discovery dead wild boar had reportedly been found in the vicinity of the village's pig farm houses. 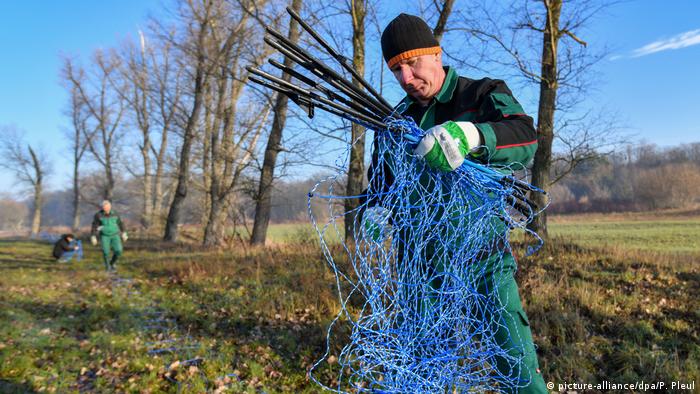 The Polish government plans to cull 90% of the country's wild boar after the government passed a special law on containing ASF in December giving Polish hunting associations new powers in culling wild boar.

The German states of Brandenburg and Saxony have both built fences along the border with Poland to prevent wild boars from entering. Saxony also recently heightened measures for hunters, who must now report every wild boar found dead and any that has been killed, stating the place where they were found or shot at the relevant local food inspection and veterinary office in the districts.

"Jumps over large distances in the disease spread clearly show the existing risk of introduction into Germany through human activity. The Friedrich-Loeffler-Institut (FLI) is especially concerned about the situation in wild boar in Poland as the last cases are only about 10 kilometers from the German border," said Elke Reinking, a spokesperson for FLI, Germany's federal research institute for animal health.

COVID-19 adds to the problem

In Germany, some wooded areas have been closed due to COVID-19, making surveillance more difficult, although some Polish local authorities have said eradication could actually be slowed by the social distancing measures imposed in order to stop the spread of Covid-19.

Complicating the fight against ASF was also a now lifted regulation, put in place by the Polish authorities and forbidding people from entering national parks due to COVID-19. This also applied to hunters, who play an important role in monitoring wild boar presence as well as in passive ASF surveillance, i.e. discovery and removal of infected wild boar carcasses.

Prof Thomas Mettenleiter, president of the FLI, told the German agricultural title Top Agrar that COVID-19 should not interfere with the fight against ASF. "ASF is a notifiable animal disease that must be combated quickly with all necessary measures if it occurs in Germany, regardless of the current pandemic with SARS-CoV-2," Mettenleiter said.

The US Department of Agriculture reports the ASF virus is only transmittable between animals or through infected meat or animal feed, but some believe it has the potential to transmit to humans. Chief State Sanitary Doctor Gennady Onishchenko — head of the Russian Epidemiology Service, for example, noted that "if we take into account the fact that pig physiology is very close to human physiology, and they suffer illness in almost the same way as we do, there is reason to believe that in the next round of mutation the virus can become dangerous to humans."

New viruses and diseases, previously found only in tropical climates, are reaching Europe. Researchers in a high-security lab on the Baltic Sea island of Riems are working to put a stop to these dangerous viruses.