Why the pro-Trump QAnon movement is finding followers in Japan | Asia | An in-depth look at news from across the continent | DW | 25.01.2021

Why the pro-Trump QAnon movement is finding followers in Japan

After emerging among conspiracy theorists in the US, the far-right QAnon movement is expanding to include a small but dedicated band of adherents in Japan. Julian Ryall reports from Tokyo. 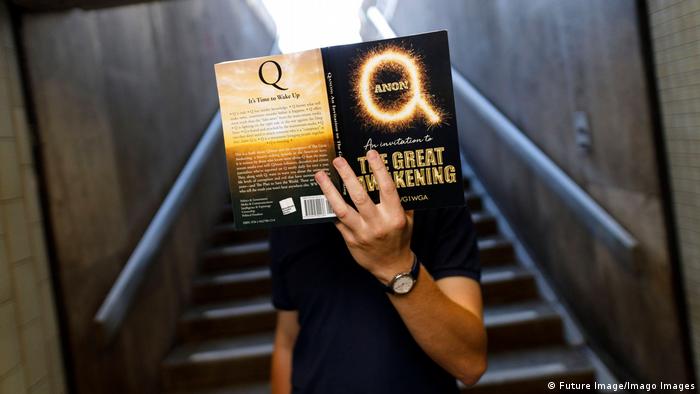 Undeterred by the mayhem at the Capitol in Washington and the near-universal condemnation of Donald Trump's failures in the dying days of his presidency, the small but committed Japanese chapter of the far-right QAnon movement is standing by its man.

It is also advancing some absurd, albeit uniquely Japanese theories: The imperial family was replaced by "fakes" during the mid-1800s; Emperor Hirohito was British, an agent for the CIA, and owned the patent for the atomic bombs that were dropped on Hiroshima and Nagasaki during the closing days of World War II.

The group clearly has an ax to grind with its monarchy, as members are also convinced that the nearly 20,000 people who died in the tsunami triggered by an earthquake off northeast Japan in March 2011 were victims of the "artificial tsunami terrorism" overseen by Hirohito's son Emperor Akihito, who abdicated in April 2019.

A past tainted by cultish beliefs

A member of the group who goes by the name Eri claims there are at least 500 QAnon followers across Japan and a further 100 people are part of the QArmy Japan Flynn — an allied group that idolizes Michael Flynn. The former national security advisor to Trump had to step down after just 24 days for lying over his links to Russia before the 2016 presidential election.

As well as being convinced that Trump legitimately won the 2020 election and has been cheated out of a second term as president, QAnon Japan adherents believe that Japanese politics is "dominated by foreigners" who have sold off the nation's wealth to "global capitalists" through privatization. They also believe that ethnic Koreans are running the government.

Similarly, they believe that "deep state" is implementing a "global human population reduction plan" that has previously relied on war, illness and infertility to control population numbers.

Jun Okumura, an analyst at the Meiji Institute for Global Affairs, says there are some clear parallels with the emergence of QAnon and another cult that briefly shook Japan.

"I look at these people and while they are present and visible in every society, I see this group as being quite similar to the Aum Shinrikyo cult back in the early 1990s," he told DW, referring to the violent quasi-religious organization that released sarin gas on the Tokyo subway system in March 1995, killing 12 people.

"It appears that a small minority of people have their minds wired to accept these outlandish theories in spite of all the evidence and knowledge that is put directly in front of them," Okumura said. "There is even the argument that it is human nature to want to believe that a person is privy to secret information or knowledge that no-one else has."

QAnon Japan followers are convinced that global warming is a lie and that the planet's climate is being artificially manipulated, while the coronavirus pandemic that started in the Chinese city of Wuhan is linked to the introduction of 5G mobile networks "and may function as a controllable electromagnetic weapon," Eri told DW.

Stephen Nagy, an associate professor of international relations at Tokyo's International Christian University, points out that social media has made the message of conspiracy theorists far easier to disseminate.

"Anti-vaxxers, anti-maskers, those that think the coronavirus was a biological weapon deliberately manufactured in a Chinese laboratory and brought into Japan by North Korean agents – where does it all come from and why do some people fall for these tales?" he asked.

"I remember similar stories in years gone by, but they never gained any real traction then. But now we live in an era where social media amplifies and expands every thought and idea," Nagy told DW.

"And with people now locked down because of the coronavirus, many are going online and falling down the rabbit hole offered by QAnon and others with similar agendas," he added.

In a country that broadly reveres its monarchy, QAnon's opinions on the imperial family are perhaps most surprising.

Eri insists that the members of the real imperial family were "replaced by fakes" during the Meiji era and "Emperor Hirohito had British nationality and is not a pure Japanese," adding that Emperor Hirohito, who was Japan's emperor from 1926 until his death in 1989, was a CIA agent.

QAnon also claims that Hirohito's son and heir, Emperor Akihito, was behind the March 2011 earthquake tragedy.

Not all Trump supporters back QAnon

But many Japanese supporters of Trump's politics are scathing in their assessment of QAnon's conspiracy theories.

"I've noticed their tweets, but none of us is taking them seriously because they are clearly a cult," Yoko Ishii, a conservative activist and journalist who has backed Trump, told DW. "They are not politically influential or a threat as they won't grow, at least among the conservative political community. They are nerds and conspiracy theorists."

But Eri disagrees, insisting that QAnon Japan is "a wonderful grassroots movement that makes everyone happy."