Capitol Hill riots: Are Western democracies under attack? | Germany | News and in-depth reporting from Berlin and beyond | DW | 07.01.2021 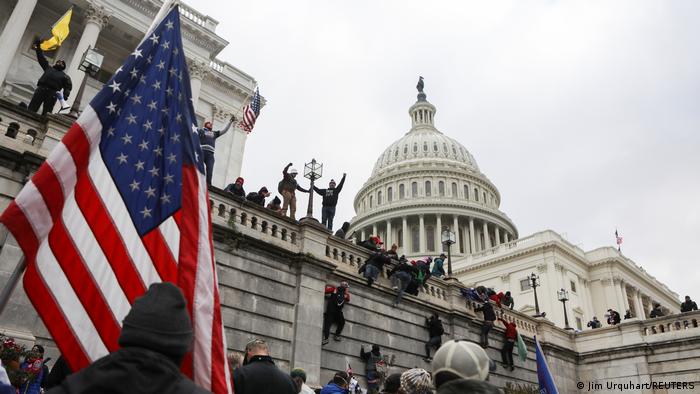 The scenes that unfolded on Capitol Hill on Wednesday reminded many Europeans of events in their own countries.

In 2006, a far-right mob stormed the Hungarian parliament, for example, engaging in street battles with police that lasted for weeks. These events ultimately saw an increase in support for right-wing populist Prime Minister Viktor Orban.

Some Germans felt reminded of the National Socialist riots of the 1920s and 1930s.

But there were striking parallels with much more recent events: In August 2020, after protests of the so-called "Querdenker" (lateral thinker) movementagainst the government's coronavirus restrictions, demonstrators stormed the steps of the Reichstag, Germany's parliament building. Several of them were brandishing flags from the country's imperial era and symbols of the extreme-right.

Police prevented the mob from entering the building, but the events deeply shook Germany.

There are many parallels between the events in Washington and Berlin says Miro Dittrich, a researcher who has been studying right-wing extremism on the internet for years. He says both the German "Querdenker" movement and the Trump supporters used online forums, messenger services and social media platforms in order to plan their actions. 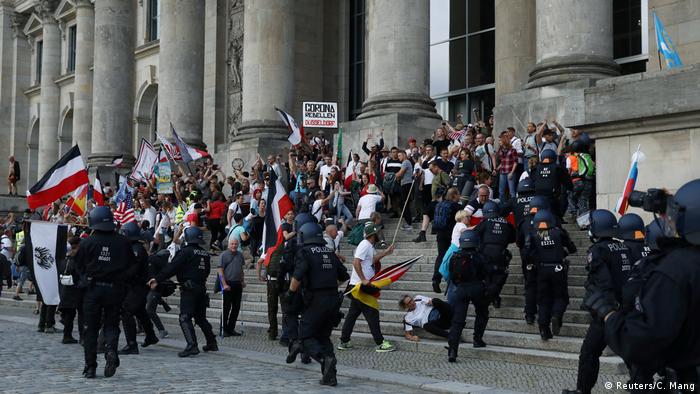 In August 2020 far-right protesters stormed the steps of the Reichstag, Germany's parliament building

"The problem is, that the security agencies didn't see that," Dittrich deplores. "The alternative realities that are forming on the internet, with people clearly calling for violence and organizing this, they are simply being ignored."

Dittrich says that the German and the US authorities are also not strong enough in patrolling the digital space.

But is democracy itself as vulnerable as the buildings that were breached in Budapest, Berlin and now, Washington DC?

Political scientist Daniel Ziblatt has spent many years studying the breakdown of democracies in Europe, Latin America and now his own country, the United States. He believes that democracy is under threat worldwide.

"The US is a pretty old democracy, it is a rich democracy. This should make it stable. And the fact that we are seeing the erosion of democracy in the US should be a warning sign to other countries," says Ziblatt, who, together with Steven Levitsky, has written the best-selling book How Democracies Die.

Ziblatt tells DW that the previously dominant majority in the US, white male Christians, perceives itself as being in decline. "This is in part what is driving this. And this societal change is a commonality of all Western democracies," he says.

The level of polarization, however, is much higher in the United States than in most European countries, Ziblatt believes. "Part of this has to do with the fact that we have a two-party system. That is a zero-sum political battle. Coalition governments can take the hard edge off politics."

German political scientist Sebastian Bukow points out another crucial difference between Germany and the US: "In the US, for four years, democracy has been repeatedly questioned by the president himself." In contrast, he says, the right-wing protesters in Berlin were supported by a "very small radical minority in society."

Bukow doesn't think that a degeneration into violence is on the horizon for all Western European democracies. He draws on a study on authoritarianism, conducted recently by researchers from Leipzig University. It showed that in Germany "satisfaction with democracy is stable, even rising, but that there is nevertheless a small, radicalizing section of society that rejects democracy."

In 1933, German democracy failed, as the Nazis exploited its weaknesses and managed to establish a totalitarian regime. That is why after World War II, West Germany established what it considered a resilient democracy: A system in place until today, that limits freedom of speech and association in order to safeguard and protect the constitutional order.

"I think there is something to be learned for the US from that German experience," Daniel Ziblatt says. "The idea that democracy is not a machine that runs on its own but that it has to be defended, is a valuable lesson. The irony is of course that Americans helped build German democracy."

Hooligans in 2020: How 'militant neo-Nazis' have spearheaded coronavirus protests