Why so many gosh darn jellyfish?

Mediterranean resorts are having to ban swimming because of plagues of jellyfish, which scientists blame on a complex cocktail of human impacts, from climate change to overfishing. 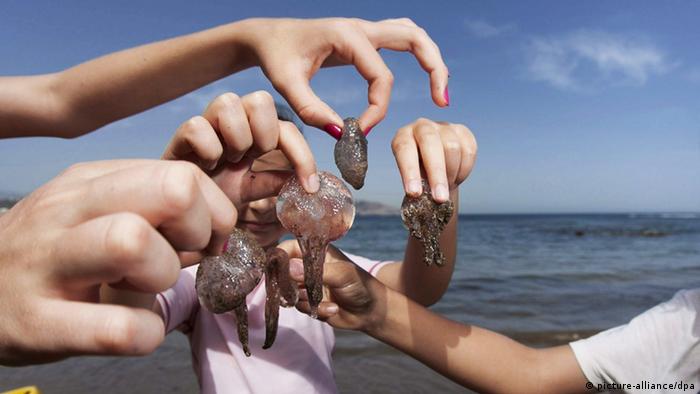 Few things evoke the idea of a relaxing vacation than a dip in the calm waters of the Mediterranean — especially for northern Europeans. But idyllic tourist spots such as southern Spain are increasingly having to prohibit bathing due to plagues of dangerous jellyfish.

Experts say jellyfish aren't just an inconvenience for swimmers. They are evidence of a perfect storm of human impacts destabilizing marine ecosystems.

Climate change, unsustainable fishing practices and agricultural chemicals are all suspects in the explosion in jellyfish numbers. But a lack of scientific knowledge about these alien-looking creatures and their complex biology means pinning down the exact cause is a complex business.

The many differences between thousands of species of jellyfish make it all the more challenging for researchers to pin down clear data.

"To say that all jellyfish are the same is like saying that a lion and a rhino are the same," Damien Haberlin, post-doctoral researcher at the Centre for Marine and Renewable Energy in Ireland, told DW.

Jellyfish invasions in coastal areas aren't an entirely new phenomenon. But two decades ago they were an occasional event. Now, they happen almost every year, Haberlin said.

Scientists agree that warmer sea temperatures are opening up new areas where jellyfish can reproduce, and increasing the availability of their favorite food — plankton. But it's not a uniform picture.

Earlier this year, beaches on the Spanish island of Mallorca and the seaside resort of Benidorm were closed due to a plague of the Atlantic Portuguese man o' war — not exactly a jellyfish, but a siphonophore, a group of animals closely-related to jellyfish. 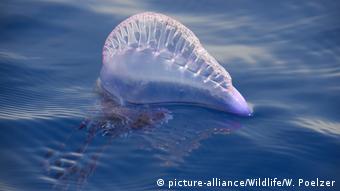 Experts suspect their arrival on the Mediterranean coast — which dates back to 2010 — is due to strong wind currents from the Atlantic Ocean, but these climatic conditions are not directly related to climate change.

And not all jellyfish thrive in warm waters. The world's largest jellyfish — the lion's mane jellyfish, which has a powerful sting and is often found around the UK and Ireland — prefers cooler waters.

Climate change has complex effects. For instance, it's blamed for lower levels of rainfall in southern Europe. That means the amount of fresh water flowing from rivers into the sea decreases, as does the difference between salinity levels in coastal waters and the open sea, where jellyfish mainly reproduce. This allows jellyfish to reach the shore with far less effort, often simply driven by the wind. 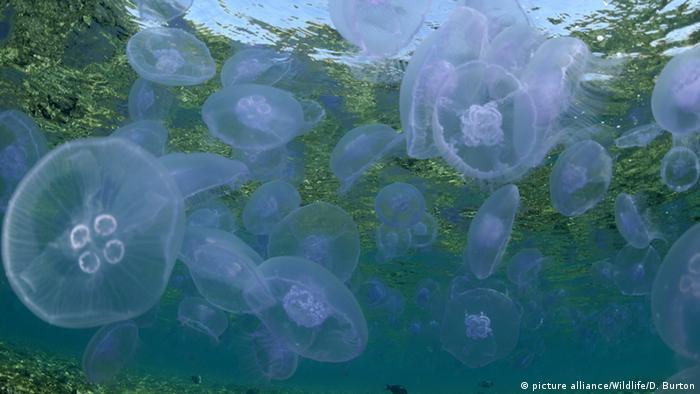 And the water that does make it into the Med is often highly polluted. High levels of nitrates and phosphates from agriculture ultimately end up in the oceans. Nitrates are key to the growth of phytoplankton, and even sewage from coastal developments can feed them up, meaning, in turn, more food for jellyfish.

At the same time, overfishing reduces the number of marine species that make life hard for jellyfish — a fact the Spanish environment ministry acknowledges.

Haberlin says the complexity of the ecosystem means it's difficult to prove unequivocally that this advantage leads to an explosion in jellyfish numbers, but studies suggest it could be a factor. But there is little doubt that overfishing has drastically depleted the jellyfish's natural predators — animals like sea turtles, swordfish, ocean sunfish and Atlantic bluefin tuna.

The Mediterranean is the most important bluefin tuna fishery in the world but the species is endangered, WWF says, and more than 25,000 sea turtles are caught along its coasts every year, even though they are protected species.

And our impact on the marine ecosystem doesn't stop there. Even maritime traffic could be a factor, as it sometimes inadvertently transports species, including jellyfish, from one part of the world to the other, García Varas says.

Rooting out the causes

Experts stress that to really understand how all these factors fit together, we need more accurate data on jellyfish behavior and what makes them thrive. But we don't have to wait for a complete picture to act on factors we know are upsetting the Mediterranean's delicate ecosystems.

"We have to work on the root causes that generate these changes to restore the balance in the oceans," García Varas says.

What is clear is that exploding numbers of the wobbly stingers along Mediterranean coasts are sign of the poor health of our oceans. And finding yourself skin-to-tentacle with one could be enough to ruin your vacation.

But they aren't just a worry for tourists. Ironically, jellyfish could bite the hand that feeds them, as people desert jellyfish-infested beaches, and fishermen in some parts of the world have already lost out economically as jellyfish clog their nets and gobble up fish eggs and larvae.

Blue economy: Not just for the fish

Moving to a "blue" economy is crucial for the sustainability in our world's oceans, say experts at the 5th World Ocean Summit happening in Mexico this week. But what is "blue economy" actually about? (07.03.2018)

Living Planet: Is the EU doing enough to protect fisheries?